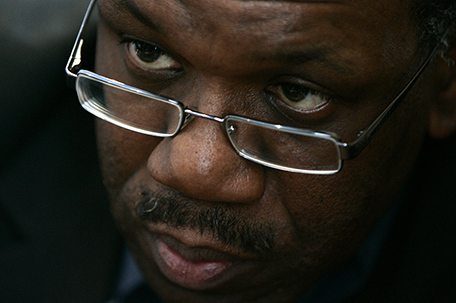 ABOVE PHOTO: Rev. Joel Edwards, general director of the British Evangelical Alliance, speaking to the Associated Press in London in this image made March 15, 2007. The alliance, whose members are generally very conservative on moral issues, has taken a group position opposing a new law that guarantees equal treatment for gays and lesbians. But he said the alliance hasn’t made that a lobbying point or an election campaign issues. One reason may be contained in the alliance’s “Who do evangelicals think they are?” booklet. It says some UK evangelicals don’t want to be associated with the “North American, Bible-bashing, moral majority mentality.” But Edwards, a British immigrant from Jamaica, said many British evangelicals believe their civil liberties and religious beliefs will be violated by the new gay rights law, and they are saying that in group petitions to legislators and the central government.”Let’s say that what you have is evangelicalism in a new mode of active citizenship, which I welcome,” said Edwards. (AP Photo/Alastair Grant)

Remarkably, leaders of two upcoming conservative events expressed concern this week for the safety of certain people who might attend. On Monday, the Washington Post reported that the chairman of the Conservative Political Action Conference (CPAC) said he could not assure Utah Sen. Mitt Romney’s safety at the conference after his singular vote among his Republican colleagues to convict President Donald Trump for abuse of power. On Tuesday, the Southern Baptist Convention’s Baptist Press reported that the president of the SBC Pastors’ Conference had responded to harsh backlash, much of it on social media, to the choice of some of the speakers for the annual summer event. In particular, many protested the inclusion of a woman “spoken word artist” who also calls herself a “teaching pastor.” BP explained that the conference president’s staff is monitoring social media “to determine whether sentiments are voiced that would endanger [her] for participating.” Endanger. Let that sink in. The president of the Pastors’ Conference is worried that it might be dangerous for a woman to speak at the gathering. Is this the new normal for conservative evangelical Christianity (which is about as well represented at political events as religious conferences)? Perhaps it should come as no surprise. After all, White people – who thought of themselves as good Christians – enslaved Africans and defended slavery as an institution. They lynched Black men as they championed segregation.

In the 1980s and ’90s, fundamentalist Southern Baptists ruthlessly purged denominational institutions and agencies of moderate leadership and SBC-member churches of moderate pastors (and laypersons). Since then, these leaders of the “conservative resurgence” and their appointees have steadfastly ignored sexual abuse in their midst and enabled predator pastors to move from congregation to congregation. (There may be some hope in the current SBC president’s stated commitment to changing this abysmal record.)

White evangelicals overwhelmingly support a United States president who has unrelentingly mocked opponents and encouraged violence and most recently has begun a shameless campaign to exact vengeance on government employees who testified under congressional subpoena in his impeachment trial, firing some while directly and indirectly threatening others. Why would we be surprised now that people who call themselves Christian issue threats of violence, troll people online, engage in and perpetuate hate speech and character assassination, and contribute to an atmosphere so treacherous that conference organizers worry whether speakers and some attendees will be safe?

Certainly, conservative apologists will cry, “It’s not all evangelicals!” (And, no, it’s not). They’ll condemn threats of violence. They’ll say these are the acts of a few people. The question for me, however, is this: Will these same conservative apologists ever pause to ask themselves what it is about white evangelicalism that fosters a climate where the threat of violence perpetrated by their own constituents must be considered? Could the answer be found in the prevailing theology? A theology that subordinates women? A theology that devalues and delegitimizes the faith of anyone who differs from them? A theology that has so thoroughly accommodated its quest for political power that it can no longer tell the difference between evangelical Christianity and the Republican Party? For decades, the Religious Right has insisted moderate and progressive Christians are not of the same faith as they. I’ve come to believe that they’re right. I do not think we serve the same God, read the same Bible or follow the same Jesus. The God they serve is power, and some are even willing to obtain and maintain power through violence, whether real or condoned.

Am I painting all evangelicals with the same brush? Of course not. But unless evangelicals address the problems in their midst, they are complicit with the wrongdoing done in their name. The fears for safety in the SBC pastors’ conference and the CPAC are not aberrations. They are instances of the larger moral crisis in evangelicalism: Will the love of power obscure the gospel of Jesus? Our Baptist forebears were persecuted for their dissent in Europe and the United States, and they knew the dangers of the unholy alignment of church and state. Still, many of them embraced slavery and white supremacy, and those dissonant choices reverberate today among Southern Baptists and other evangelicals who have felt the loss of Christian white male power in the face of the nation’s growing diversity and gender equality.

I’m realistic enough to know that my words, whether spoken or written, have little to no impact on conservatives. At this point, trying to persuade white evangelicals would be like spitting in the wind. But I think moderate and progressive Christians must speak up, especially now when the political behaviors of white evangelicals threaten to define the perception of Christianity in this country. We cannot afford to allow the Religious Right to control the narrative of what Christian faith is. The task is left to us to salvage any public sense that Christianity is more than a regressive, hateful, power-grabbing institution. It’s time to show up and speak up. To be the church visible and vocal. To embody God’s love and Jesus’ example. The future of the Christian church in the U.S. is counting on us.