Guest Editorial: Chappelle is transphobic, and he also degrades our history 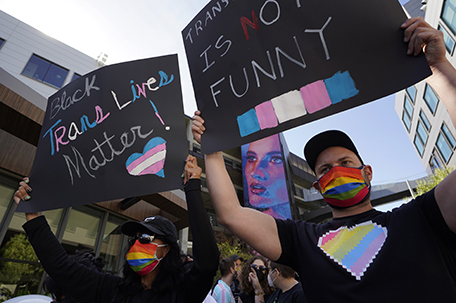 ABOVE PHOTO: People protest outside the Netflix building on Vine Street in the Hollywood section of Los Angeles, Wednesday, Oct. 20, 2021. Critics and supporters of Dave Chappelle’s Netflix special and its anti-transgender comments gathered outside the company’s offices Wednesday. (AP Photo/Damian Dovarganes)

The more I listen to the debate about the Dave Chappelle Netflix special “The Closer,” the more I believe that most of those who are attacking his transphobic remarks didn’t watch it or just saw a short clip. There is no doubt that the special is transphobic, but it is more than that. If you have watched it and condemned only his transphobic remarks, you might want to watch it again and note how he reduces the whole of LGBTQ history to bathroom sex.

Let me quote a part of his so-called act, and I’m paraphrasing here: “I miss the old school gays, the Stonewall gays, those are the ones I respect. They didn’t take [expletive] from anybody, they fought for their freedom…the old school gays, the glory hole gays, those are the ones I like…the new gays don’t even know what the glory hole is. It’s a hole in the wall that gay contractors build…when they want to have some fun, they will put their penises in that hole.”

It goes on, but the funny thing is, I haven’t heard anyone in our community including GLAAD speaking up about this.

As an older Stonewall gay, I feel insulted and outraged. And to other members of the LGBTQ community: how do you feel having our people who fought for us at Stonewall and beyond be reduced to glory holes? Those old school gays that Chappelle is talking about, the ones who fought for equality in 1969, include Marsha P. Johnson and Sylvia Rivera. While many want to hold them up as historic figures in our history, why are people not standing up when their whole generation is being reduced to bathroom sex?

Are we a community struggling for equality, or are we just a one issue group who can only respond to one thing at a time? Are we not intelligent enough to connect the two issues? Actually if you do connect the two issues — the transphobia and the denigration of our history — it makes the arguments against him stronger.  Not only does he say he’s transphobic, he also relegates historic trans figures to bathroom sex.

What does it mean when nobody calls Chappelle out for his comments about Stonewall and our history? It perpetuates a myth that is not true, that the Stonewall generation only cared about sex. We were fighting, and we continue to fight, for so much more. Chappelle’s comments dishonor the memory of Marsha, Sylvia, and all of us who put our lives on the line for equality. They need to be called out, and we need to do our jobs to correct the historical record.