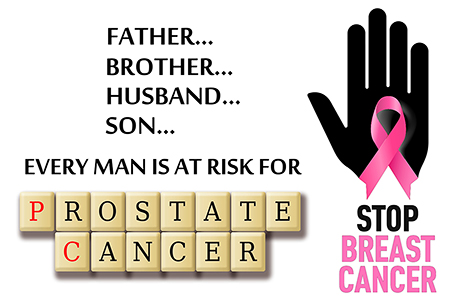 It’s rare to find the words “prostate cancer” and “breast cancer” in the same sentence. After all, one (prostate cancer) affects only men. The other affects mostly women. But despite their differences, the two diseases actually have a lot in common, particularly in the way those diagnosed^ with either one evaluate their options and make decisions about treatment.

Jim Morning, of Dover, Delaware, got used to having regular physicals when he was in the Air Force, and after he retired, he continued doing so. For years, Morning’s physician monitored Morning’s PSA levels (a blood test that can indicate the presence of prostate cancer) and everything was fine. But when one of those tests came back high, the doctor referred Morning to a urologist who did a biopsy.

It was at the follow-up that the doctor told Morning that he had prostate cancer.

According to Steven Patierno, PhD, Deputy Director of the Duke Cancer Institute, men like Morning are in the minority. “Men are pretty resistant to healthcare,” he says. “I’ve had guys tell me that they’d have to be on their deathbed before they’d take a day off from work.”

For Morning—and most people—getting diagnosed with cancer is something of a shock. “I don’t think I heard anything after the word ‘cancer,’” he said.” “I had no clue what to do. All I wanted to know is ‘how long do I have?”ln the days and weeks that followed, Morning’s family mobilized and were able to get him into the MD Anderson Cancer Center in Houston. Two sisters and several cousins—all women—went with him. “When you have sisters, us guys don’t have to make decisions,” he jokes. After going over each possible treatment with MD Anderson’s doctors, Morning and his family decided on a radical prostatectomy (a complete removal of the prostate)

After his surgery, Morning started talking with other men who’d been diagnosed with prostate cancer. “A lot of these guys are ashamed and don’t want to talk about it,” he says. “They have no idea what to do. I tell them about me, how I felt. And I try to get them to understand that they’re not out there by themselves.”

Duke’s Patierno says that too many men pay don’t pay attention to their body until their symptoms are severe. “By then, it’s too late.” Women, he says, tend to be far more educated about and involved in their own healthcare. However, when it comes to breast cancer, being educated and involved doesn’t always mean better outcomes. “Many women behave just like men,” says Judy Seals-Togbo, a women’s health advocate in Memphis, Tennessee. “They put off getting screened, they skip follow-up appointments, and don’t get help until they develop symptoms.”

Women’s reasons for not getting screened or treated for breast cancer are similar to men’s reasons for not getting any kind of healthcare: Some are too busy taking care of everyone else and they don’t have time to focus on themselves. Some don’t have insurance. And many young women simply believe everything their doctor tells them. Seals-Togbo, a breast-cancer survivor herself, knew several women in their early 30s who felt there was something wrong in a breast but their doctor said they were too young to have breast cancer and not to .bother getting screened. Two died—of breast cancer—before they turned 35. “We need to train women to be more assertive in telling their doctors their symptoms,” she says, “and, if they aren’t satisfied with the answers, to go get a second opinion.”

In addition to her work with women, Seals-Togbo has seen how breast cancer stigma affects men as well. “Getting diagnosed with any kind of cancer is confusing and scary. But guys with breast cancer are also embarrassed and ashamed. They’re worried that people will think they’re not ‘real men’ because they have a ‘woman’s disease.’” The result? They frequently don’t get treated in time.

Once a man or woman receives the cancer diagnosis, the big question is, “How does it get treated?” Jim Morning had his family and a team of medical professionals to help him. And Judy Seals-Togbo, who saw her gynecologist at the first sign of trouble, got treated early.

But not everyone’s that lucky. Many men refuse to consider certain prostate cancer treatments because of the side effects (erectile dysfunction and incontinence are common), and they end up not getting rid of the cancer. Seals-Togbo worked with a woman whose doctor told her that she had breast cancer, and went directly to a local mortuary to plan her own funeral. “She had no idea—and the doctor didn’t tell her—that there are a lot of things to try before planning a funeral.”

Overall, there’s more good news than bad. “We’re getting really good at treating these two diseases,” says Patierno. “But there are 13.8 cancer survivors in the U.S. and we haven’t done a very good job figuring out how we’re going to provide ongoing care for them.”

For Jim Morning and Judy Seals-Togbo, ongoing care would be great. But what concerns them more right now is making sure that the men and women they work with get the screenings they need to catch their cancers while they’re still treatable, and the education they need to pick the option that will have the best outcome for them and their family.

Ana Fadich serves as Vice President at Men’s Health Network (MHN). She has been featured as an expert in many print and online media outlets as well as radio and television. Ana has presented at the U.S. Food and Drug Administration (FDA), Federal Government Agencies, American Public Health Association (APHA,) corporate employer sites, and conferences. Ana represents MHN at prostate cancer advocacy, research, and policy meetings.

Ana holds a Bachelor’s degree in Biological Sciences from Mount St. Mary’s College in Los Angeles, CA, and a Master’s of Public Health degree from the University of Southern California