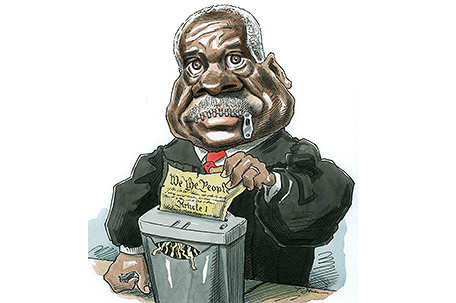 As Paleolithic and retrograde as Scalia’s opinions were rulings and dissents were on everything from gay rights to the death penalty to corporate abuse of power — there were still rare occasions when Scalia would break with his19th century strict constructionist orthodoxy and actually cast a decent vote on a compelling public policy issue.

For example, Scalia voted to scrap Arizona’s minority voter suppression law in a case in 2012. In a 2014 case, he vigorously disagreed that an anonymous traffic stop fell under the on reasonable suspicion rule, regarding it as a  breach of the Constitutional provision against unreasonable search and seizure. Scalia wrote over 100 opinions that could be considered moderate, even liberal, but were anything but ultra-right.

With more than half of them, Thomas disagreed.

Thomas has been more than content to be the odd man out in more than a few decisions that involved outrageous violations of civil rights and criminal justice protections. While Scalia was a committed strict constructionist, there were a few things that he and other conservatives weren’t able to stomach, something that showed a modicum of nimbleness underneath his granite ultra-conservative exterior.

From what we know about Gorsuch so far, he’d be content to join Thomas as the High Court’s odd man out. His judicial record shows a willingness to join Thomas on that far-right wing.

How do we know this? Let’s start with the phrase “I am blown away by Thomas’ dissent.”

The dissent Gorsuch was so enamored with was in a case involving the government’s use of eminent domain. Thomas hit the ceiling in roundly condemning it as a violation of the Constitution’s prohibition against property. This was a touchy case that irked both liberals, libertarians and conservatives. To Gorsuch and Thomas, it fit squarely in with their hard read of the Constitution. Or as Gorsuch put it in applauding Thomas, it violated “the plain textual meaning of the property taking clause of the Constitution.”

Thomas and Scalia wrapped themselves in loving embrace in the “originalism” of the Constitution. They saw it as their sworn duty to defend every comma and period of it as the sacred word from on high which could not be violated. But it’s more than that with Thomas.  He’s been on a 25-year search and destroy mission to smack down anything that remotely smacks of modern-day, case by case interpretation of its clauses and provisions. Gorsuch plainly likes everything about that.

It’s not just their Siamese twin read of the Constitution vis-à-vis modern day thorny public policy and legal issues that makes Gorsuch as every bit as dangerous as Thomas. He’s also carefully studied and took a page from the Thomas playbook in his effort to put on a correct face before the public and the Senate. He bobbed, weaved, ducked, dodged, and weaseled around and avoided being pinned down on any remotely controversial issue that could give Democrats any additional information to vote no on his confirmation. The only reason this didn’t completely work for Thomas was the Anita Hill “curve ball.”  There was no Hill to ambush Gorsuch and his paper-thin voting record on the appellate court didn’t provide much ammunition for Democrats either.

However, his rock-solid seal of approval from the Heritage Foundation and his legal writings are more than enough to give Democrats the weapons they need to say no. There is the revealing passage in which he flatly railed that a judge should not be a “pragmatic social-welfare maximizer” who makes decisions “only with a radically underdetermined choice to make.” Translated, a judge that interprets the law in any manner that remotely smacks of social engineering strays onto dangerous ground.

The ultimate horror on the High Court is not having another judge in the mold of Scalia, but having one in the mold of Thomas. The two would form a powerful one-two punch that would be far more devastating than anything than the Scalia-Thomas combo offered. Thomas would then have absolutely no need to ever utter another word during arguments before the court because he would have the soft-spoken, articulate, and seemingly legally coherent Gorsuch to say exactly what he’s thinking and how he’ll vote on any and every case that comes before the court. Gorsuch, unlike the cantankerous, crusty and bellicose Scalia, will be a fresh face and voice on the SCOTUS that will provide an air of respectability to shield Thomas’s destructive opinions and rulings.

Thomas will no longer have to worry about being the Supreme Court’s Lone Ranger on issues such as the death penalty or the inalienable rights of corporations over people. He’ll have the twin he’s always longed for in Gorsuch.

Earl Ofari Hutchinson is an author and political analyst. He is the author of In ‘Scalia’s Shadow: The Trump Supreme Court’ (Amazon Kindle). He is an associate editor of New America Media. He is a weekly co-host of the Al Sharpton Show on Radio One. He is the host of the weekly Hutchinson Report on KPFK 90.7 FM Los Angeles and the Pacifica Network.