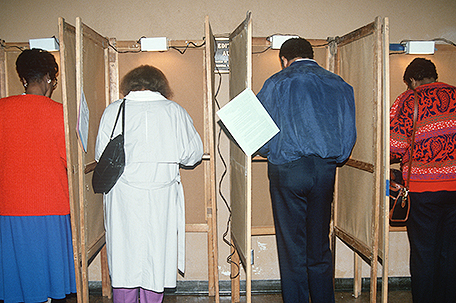 ABOVE PHOTO: By Joseph Sohm / Shutterstock.com

Now that the barrage of debates and campaign stump speeches of the 2016 president election primary season is over, we all kind of know that the general election is going to come down to the Republican party’s presumptive nominee, businessman Donald Trump, and former Secretary of State Hillary Rodham Clinton, who appears to be the eventual Democratic nominee.

As it stands right now, Clinton has 2,205 of the 2,383 she needs to secure the Democratic nomination. Her opponent Sen. Bernie Sanders has just 1,362 delegates and doesn’t have a mathematical shot to win.

Despite the rumblings of the “Bernie or Bust” crowd, a group of Sanders supporters who have said that they’ll either write Sanders in, vote for Dr. Jill Stein, the Green Party’s presidential candidate, or in some extreme cases, vote for Trump in hopes of fomenting a “revolution” that would sweep Sanders to power, Sanders and his supporters will most likely unite behind Clinton at some point.

One of the main reasons that Clinton nearly has the Democratic nomination in her grasp is because of the Black vote. Whether we’re talking South Carolina, Pennsylvania or Maryland, Clinton seems to resonate with Black voters in a way that Sanders hasn’t been able to despite having prominent Blacks like rapper Killer Mike, Cornel West, Spike Lee and Harry Belafonte in his corner.

According to Jonathan Capehart, a political columnist for the Washington Post, Clinton has won the heart of Black voters by tying herself to the legacy of President Barack Obama, talking about the way that income inequality is impacted by race and how that hurts the Black community, and putting some of the onus on Whites for healing the country’s racial divide.

Clinton has also been on Black radio stations, attended social events, played dominoes with the brothers and has even admitted to carrying a bottle of hot sauce in her bag, something that we’ve all done from time to time whether or not we want to admit it.

But while some in the Black community are happy to give Clinton their votes because she’s hobnobbed with them, the ‘brothas’ and ‘sistuhs’ need to make sure that she remembers us if she wins the presidency. The Black voters who cast their lot with Clinton need to hold her feet to the fire and insist that she keeps her promises to them.

It’s something we haven’t been all that good at of late. Despite having the power to elect mayors, congressmen, state representatives governors and even a president, the Black community hasn’t figured out how to hold those politicians we got elected accountable to carry out the promises they made at our local church or community fish fry. Unemployment among Blacks is still high, inner city schools are underfunded and our communities are beset by violence in the form of both crime and police brutality.

We’ll be at the polls to pull down the lever or press the button on Election Day. But what happens after that?  From my own perspective, we look at our politicians, especially those who look like us, as if they were some kind of Messiah who will take away all of our problems with one stroke of the pen or a magic wand.

Even worse is that once the folks we elect are sworn in, we stop paying attention until we see them again during the next election.

The next great movement for Blacks is to become more engaged in the political process. We have to be more informed citizens, starting with something as a basic as being active in local community organizations, using social media for something other than posting fight videos, bombarding your local councilman’s office with email on a particular topic, or showing up at his or her headquarters with protesters to demand change.

But no matter what method we choose to engage with, the Black community has got to make politicians accountable to our issues. That old Frederick Douglass adage about power conceding nothing without demand is in play here and it’s time for Blacks to make that demand of all of our public officials, no matter what race or party affiliation.

We’ve done it before.

In 1960, the Black vote swept John F. Kennedy into the Oval Office after he visited the Rev. Dr. Martin Luther King Jr. in jail and subsequently helped him get released. On the campaign trail, Kennedy promised to end discrimination in public housing with an executive order, but once he got into office, he dragged his feet.

Blacks forced President Kennedy to pay attention and do as he promised by taking to the streets, conducting sit-ins, and boycotting. The end result was civil rights legislation.

That’s what we have to do now.

We have to be vigilant about this even when we lose a few battles along the way. When I hear Black Sanders supporters say they’re not going to vote in the general election, I shake my head because they don’t realize that they can fight for their issues even if it their candidate is not on the ballot.

The tactics will probably be different from those that were used during the civil rights movement, but we have to sit down and figure out a way to make it work for us. Saying that the game is rigged or we shouldn’t participate in voting is a cop out.

The most important thing that Dr. King left us is the realization that we have to be vigilant in our fight to make those in power accountable to us.

“We have to give ourselves to this struggle until the end,” King said, “We’ve got to see it through.”

And seeing it through begins at the ballot box.