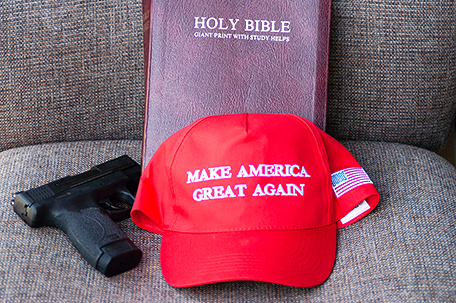 The 21st century has the personality of the Civil War. A MAGA (Make America Great Again) man with a Republican base, responding to his permissive leadership — offering no substance, but sanctioning white supremacy, domestic terrorism and race-based politics. Historically rejected constituencies, threatened by anything but a white America, are creating chaos, terror and taking Black lives. Local politics are preempted by an “us vs them” national debate, aided by the media making MAGA man — the most talked about in America. Embarrassed Republicans are co-opted, because they want Republican control. Most Republicans are not racist, but some of them —except for Liz Cheney — hold their noses and ride the wave. MAGA man uses race and hate as bait; while vilified, but emerging progressives, use substance and empathy.

Blacks inadvertently are helping MAGA man. Significant numbers have lost confidence in politicians delivering on campaign promises and believe politics is about power, not performance. Although Black leaders have an affirmative duty to ask why Blacks are not registering, registered voters are not voting, and some have become Republicans. MAGA man has built an army of frustrated white voters. Progressives, like John Fetterman, who likely will be an asset in the fall, are duplicating the strategy. Despite frustration, Black voters are still the anchor for elected Blacks in DC, Harrisburg and Philadelphia. The battle for the soul of America depends on convincing Blacks that politics makes a difference.

Buffalo is a devastating reminder of politicians giving permission and cover to murderers. Congress members hide for their lives, then call insurrectionists normal capital visitors. Many people of faith witnessing extraordinary climate change, hurricanes, tornadoes, heat waves, baby formula shortages, children killed in schools and on streets, Black on Black crime and COVID-19, believe that we should see God and Muhammad punishing our selfish exercise of free will, and that prayers should be lifted for vision and forgiveness, not power and division.

If I can help somebody along the way, then my living shall not be in vain

Philadelphians embody that spirit. But 25% poverty, underperforming public schools, violence, overlooked Black businesses and 250,000 illiterate citizens cannot be transformed one person or business at a time, nor through candid conversations and byproducts of business growth. Improved Black demographics were not a byproduct of the pre-pandemic business renaissance and efforts to make Philadelphia  a destination city, which former Mayor Ed Rendell, the Chamber and Center City District mistakenly predicted. Infrastructure spending without addressing public and private sector deficiencies will also not be the answer. Stop searching for short term “feather in cap” wins.

In the past, civil rights organizations executed a vision that transformed Black lives and America’s legal landscape. Nationally recognized women and men managed intra-organizational conflicts and confrontations with both Presidents Kennedy and Johnson but kept their eyes on the prize.

A good example of recent progess can be found in Charlotte, North Carolina. The city has a vision to make Blacks peers in its future, not just affirmative action beneficiaries. Charlotte mayor Vi Lyles has called a $250M public/private partnership a new standard for American cities. Other than confidence and the idea that transformative change requires short term victories, there’s no reason Philadelphia cannot do what Charlotte is doing. Candidates for 2023 should study Charlotte and Josh Shapiro’s brief in Pennsylvania’s education funding formula litigation. The year 2023 must be about change agents with the Black status quo —not race or gender — as priority number one. For example, there should be comfort with a woman of color being our next mayor, but that should not be the criteria. Blacks criticize police conduct and expect accountability, but generally do not support defunding police. The DA, FOP, president judge, council president, police commissioner and mayor should manage public safety and police conduct strategy. Pointing fingers, while neighborhoods serve as shooting galleries, is criminal. Political parties should adopt substantive platforms drafted by subject matter experts. Democrats organized around substance would be unique and powerful. The mayor, DA and controller, elected by the same voters, should provide coordinated leadership. Blacks in party leadership must expand, and absent a platform, they must have a substantive endorsement strategy that considers progressives.

Fiction and lies are bludgeoning truth in pursuit of power and the soul of America. Maya Wiley, CEO of the Leadership Conference on Civil and Human Rights said “Leaders cannot shrink from this moment. The violent hate, dangerous erosion of our democracy and the internal attack on truth and knowledge must be confronted.”

Lies and power over integrity politicians are greater threats to American democracy than  the war in Ukraine. Blacks condemn Russia, but financing third party wars, while not solving generations of poverty and education reaffirms, domestic racism. Fabricated bipartisanship on Ukraine is a filibuster on Blacks. A deafening silence, because of the midterms and power affecting both parties, are more critical than Black lives and safety.

These facts communicate disappointment in my generation of Black and white leaders. Despite the frustration, anger and pride that racism caused, Blacks have a demonstrated love and decorated history of contributing to Philadelphia excellence, while expected to believe “Godot is coming.”

But more is needed than historic firsts. The first Black woman on the Supreme Court will not position Blacks to see the American Dream whites see in the mirror every morning. Diverse leaders must stretch to make Philadelphia into America’s most equitable city. Western Savings Bank used to advertise, “Wishing won’t do it.” More than deep pockets and short arms are required.

CEOs can accelerate Black procurement, employment and leadership, which should be core values. Internal processes must change to produce transformative outcomes in the normal course of business, not just change in Black pockets, while white men continue to profit. White women still fight male dominance but have left Black women and men in the rear-view mirror. How? CEOs measure their performance by higher standards than Black inclusion, because stock markets do not reward poor performance.

Transforming Black outcomes is not a unilateral white responsibility. Organizations, like Community Stakeholders, are addressing unacceptable behaviors that are byproducts of poverty, education, mental health, public safety and hopelessness. Currently, a think tank is being researched, and strategies to expand Black business capacity, participation in new lines of business and access to capital are underway. But disparity studies document discrimination against Black businesses positioned for growth. Blacks need more than joint ventures where they are minority partners or typically subject to super majority voting if they are the majority partner.

Black businesses must provide jobs, contract with peers and retain Black professionals. Black leadership organizations must be aggressive advocates, assuming the risk of retaliatory responses, like Florida’s governor against Disney. Program success must be measured by demographic changes in addition to dollars spent and constituents served. Corporations should use the same formula. Without demographic change, Blacks run in place, and progress is measured by median incomes, not changed lives at scale. Investments in neighborhood commercial corridors are important, but gentrification must be managed. Kenny Gamble founded Universal in a 90% Black community, defined by drugs and prostitutes. Today the footprint is 80% white and gentrification has raced across Washington Avenue.

White racism, discrimination, conscious and unconscious bias strangle Black success and prosperity. With good schools and wide open doors, most Blacks will achieve their goal of a comfortable middle class life. Those with bigger ambitions will succeed based on talent and hard work.