Great holiday gift ideas:  The gift of another language 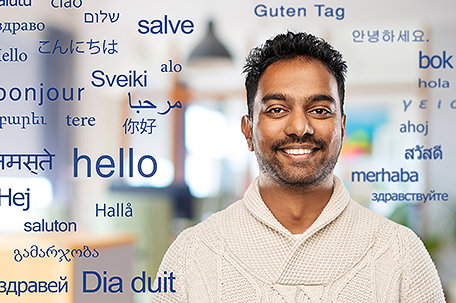 Looking for a unique holiday gift for someone? Consider giving them a foreign language course. It offers exceptional returns on the time and money invested.

Bilingual people may also have brighter employment prospects, according to the University of the Potomac in Washington, D.C. Companies have begun opening offices abroad to expand their market, the university points out. Under those circumstances, a second language may double your chances of landing a job.

But you don’t have to venture that far for employment benefits, according to the Modern Language Association of America, headquartered in New York City. From nurses and policemen to airline employees and car rental agents, a second language often gives the speaker a job-market advantage.

Mastery of a foreign tongue could translate to a broader understanding of the Black Diaspora. Books like “El Negro en Colombia” by Aquiles Escalante or reports such as “Os Negros no Brasil Colonial” could become accessible. Also, communication with Afro-descendants in other parts of the Diaspora via email could come within reach.

Learning another language also seems to provide a defense against dementia.

“Mastering a second language is like sending your brain to the gym,” according to “The Benefits of Learning a Foreign Language at an Older Age,” a report published by Meadow Ridge, a lifecare community in Redding, Connecticut. The brain develops new neural pathways while one learns a foreign language, the report adds. Along the same lines, a study of 650 people in Scotland found that those who knew a second language tended to develop dementia up to five years later than monolingual people.

The intended recipient of your foreign language gift could be planning a trip abroad. He or she might appreciate a course in a second language, because it could mean more enjoyment and insight into the culture of their destination.

If you’d like to explore giving the gift of another language, Philadelphia has lots of resources for you. Many of the city’s universities, like Penn, La Salle, Drexel, Penn State, and other schools, offer courses in foreign languages. St. Joseph’s University has classical and modern languages, while Temple offers Arabic, French, Hebrew, Mandarin, Spanish, and more.

The Community College of Philadelphia has a bonus for Philadelphians age 65 or older that applies to any class, including foreign languages. It costs just $159 per course.

Unlike colleges, some cultural organizations focus on a single language. The American Swedish Historical Society, located at 1900 Pattison Avenue, for example, has classes in Swedish at different levels. For more information, visit: www.americanswedish.org.

“We have 10-week classes for children, which meet once a week and cost $195,” Hauteville said. “Children may take classes from three years of age on.”

An early start in learning a second language carries benefits for children, including increased problem-solving skills and creativity, many studies show.

To inquire about other cultural organizations that sponsor foreign-language classes, Google “Consulates in Philadelphia” or call the city’s Office of Immigration, (215) 686-0876.

Online learning provides yet another avenue. The Pimsleur program, which covers 51 languages, from Croatian to Russian, tells potential students that they can “Learn a new language in 30 days.” Pimsleur has three levels of monthly membership, starting at $19.95, besides an annual membership option.

Also check out Babbel at: www.Babbel.com, another popular online program. For a limited time, this company has a program where “Children learn Spanish by watching videos and playing games” for $14.95 a month.

There’s no lack of online language programs. FluentU lists 36 of them at: https://www.fluentu.com/blog/best-online-language-courses/. If a free trial is offered, take it to make an informed decision.

No matter which language-learning gift you choose, it may help to keep a few tips in mind. First, remind gift recipients to go easy on themselves. Adult language learners sometimes feel self-conscious and embarrassed. Urge them to allow themselves mistakes. I once heard a Portuguese instructor compare learning a language and cooking. “To make an omelet you have to break eggs,” he said.

Grammar matters, but at the outset, good pronunciation takes top priority. If learners nail the grammar, but distort the sounds of the target tongue, they may not be understood. In addition, once poor pronunciation becomes a habit, it’s hard to change.

During the first few weeks of learning the language, it may be worthwhile to sit down once or twice a week one-on-one with a native speaker to work on making the sounds of the new language accurately. The office of international students at colleges can probably help find a tutor.

Some language learners say, “I’ve got to see the words written down.” However, you run the risk of associating English letters with English sounds, not the sounds of the second language. Try to master the sounds of the new language by listening to CDs and repeating what the native speaker says. Pop into the language lab if you’re at school. Even 15 minutes of practice in the lab every day can make a difference.

Don’t forget the sensual side of things. Eat in restaurants that serve food from countries where the language is spoken. See films made in those parts of with world. Even with subtitles, you absorb the second language. Philadelphia has cultural festivals featuring performances and crafts from other countries, and they may include nations and areas that speak the language your gift recipient will study.