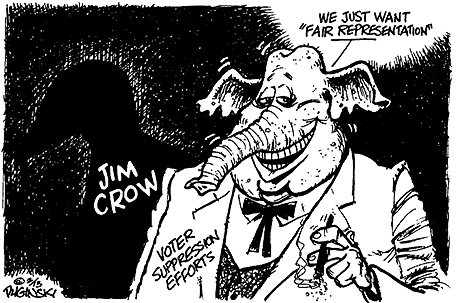 Not since George Wallace has a baldly racist candidate gripped a presidential race like Donald Trump. In 1968, Wallace won five Southern states while spewing demagoguery and bragging “we’re going to show there sure are a lot of rednecks in this country.’’ Nearly a half century later, Trump remains atop the Republican presidential pack three months after pillorying Mexican immigrants as rapists who bring drugs and crime to America.

Despite media fact-checks reconfirming that immigrant men commit less crime than American men, Trump intensified his attacks in subsequent speeches, telling a Latino journalist to “go back to Univision” and saying the United States is a “dumping ground for the rest of the world.” By not correcting a supporter at a town hall event, he enabled anew the falsehood that President Obama, a Christian, is a non-American Muslim.

At various junctures, some of Trump’s rivals have criticized his remarks. When Gov. Scott Walker of Wisconsin dropped out of the race, he encouraged the GOP to settle on a less negative candidate. Yet the presidential hopefuls have all pledged to support each other no matter who wins the nomination. Republican National Committee Chairman Reince Priebus has declared Trump a “net positive” for tapping into voter anger over Washington politics.

Thus, Trump betrays the GOP’s refusal to shed itself of racist appeals to voters, destroying any credibility to embrace an America that will become majority people of color by the 2040s. Trump’s statements continue to dovetail almost perfectly with poll data showing that some white people desperately cling to a whitewashed America.

Look at the large crowds that continue to cheer with wild abandon at each outrageous and ill-informed statement he makes.

The disparity in attitudes is particularly acute among Trump supporters. A Public Policy Polling survey in September found that nearly two-thirds of them think Obama is a non-American Muslim and that birthright citizenship should be eliminated. Another Public Policy Polling survey this week on North Carolina voters found that 52 percent of Trump voters think Islam should be illegal in the United States. In a Bloomberg/Des Moines Register poll, a plurality of likely Republican caucus-goers favor rounding up the nation’s 11 million undocumented immigrants, and two-thirds of caucus-goers see Trump’s immigrant position as a strength.

The Republican Party’s monocultural vision is a losing proposition on its face. Trump revels in being the top “outsider” in the presidential race, appealing to a sad, shrinking set of white people who have no one but themselves to blame for letting the world pass it by on social issues.

When white Americans were a more decisive majority of the population, playing on racial animus worked wonders for Republicans, from President Nixon’s law-and-order to President Reagan’s welfare queens, and from George H.W. Bush’s abuse of Willie Horton to George W. Bush’s attacks on affirmative action. Powerful senators like Jesse Helms and Trent Lott were famous for their reliance on racist politics.

But that GOP magic has vanished in an ever-multicultural America. The McCain-Palin and Romney-Ryan tickets of 2008 and 2012 failed miserably in questioning Obama’s patriotism, stereotyping him as a welfare king and urging nearly all-white crowds to “take back” and “restore” America. Still, the Republicans blunder on. Presidential candidate Jeb Bush declared last week that “we should not have a multicultural society,” and copied Mitt Romney’s welfare attack by claiming Democrats take care of black voters with “free stuff.”

No one should be surprised that Trump leads the pack in this electoral race baiting. This is the same man who in 1989 took out full-page ads in New York newspapers, calling for the return of the death penalty in the state over the brutal Central Park rape of a white woman jogger. Trump said in the ad, “I want to hate these muggers and murderers.”

His vitriol ignored the fact that the woman was not killed. The five African-American and Latino teenagers originally charged with the crime and imprisoned for many years were eventually exonerated. Last year, they received a $41 million settlement from New York City.

Having learned nothing from that, Trump wants the nation to join him in a new campaign of hate. His staying power, the GOP calling him a net positive, and fellow candidates following his lead tell you all you need to know. His hateful nonsense, meant for white people who still think the country is theirs, is a death rattle for the most crude forms of white privilege.

Derrick Z. Jackson can be reached at [email protected]

Why the GOP can’t get rid of its clowns