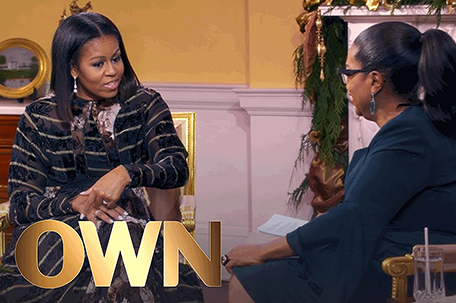 Conservatives are accusing First Lady Michelle Obama of not “going high” during her final White House interview with Oprah Winfrey. They’ll get over it.

In their latest attempt to get “Synchronized Neck Rolling” turned into an Olympic sport, Diamond and Silk, two of President-elect Donald Trump’s favorite “Blacks”, shared their feelings on “First Lady Michelle Obama Says Farewell To The White House: An Oprah Winfrey Special”, which was broadcast on CBS Monday night.

During the interview, which was kind of a candid chat between two girlfriends who just happen to be two of the world’s most powerful women, the first lady talked about the experiences that she and her husband, President Barack Obama, have had since becoming the nation’s first Black First Family.

While Michelle Obama talked about a lot of topics, what led Diamond and Silk to break out the video camera and start stretching their neck muscles was the answer the First Lady gave when Winfrey asked her about the 2016 Presidential Election.

What the election showed her was how the Obama administration was able to inspire hope, Michelle said.

That doesn’t appear to be something that we’re going to be able to say about the incoming administration of President-elect Donald Trump, she said.

“Now we’re feeling what not having hope feels like,” she said. “Hope is necessary. It’s a necessary concept. And Barack didn’t just talk about hope because he thought it was a nice slogan to get votes. I mean he and I and so many believe that if you…what else do you have if you don’t have hope? What do you give your kids if you don’t give them hope?”

So Diamond and Silk put on their best hair weaves and using their best overstated, sterotypes, “urban” talk, proceeded to attempt to use the word “hope” to try and put the onus on President Obama for a variety of ills ranging from the loss of jobs (It’s funny how no one ever remembers the auto industry bailout) to the murder rate in Chicago, which they seem to think the President could have solved with a stern talking to.

Now I admit that much of this column up to this point has been written with some not-so-subtle shade. In fact, I’ve been kind of in-your-face with it.

But to be honest, I’m kind of glad that when Michelle Obama sat down with her girl Oprah Monday night, she decided to throw some too.

For the last seven years and 11 months, President and Mrs. Obama have gone high when just about everybody on the right has gone so low they’ve been subterranean.

If we just look at the stuff that’s been done and said about her, mostly because figuring in what her husband has had to endure would take a lot more space and time than I have here, Michelle’s got such a right to throw shade it’s ridiculous.

From being called an “ape in heels” by some chick in West Virginia who looks like she was hit in the face with a shovel to being drawn with a pelvic bulge by some White Supremacist whose probably living in his mama’s basement and probably hasn’t seen a woman naked since he snuck into the girls gym when he was in high school in the late 1960s, Michelle Obama has had to rise above a whole lot of crap and done it for the most part.

But that folks like Diamond, Silk and their fellow travelers did get mad was something that didn’t surprise me much because, let’s be honest, unless it’s our favorite Synchronized Neck Rollers, people of color aren’t allowed to get mad.

Don’t believe me? Take a look back at some of the early reactions to the Mother Emanuel shootings in Charleston, South Carolina. Folks on the right were calling for people to practice good, ole down-home Christian forgiveness instead of taking to the streets, looking for Dylann Roof themselves, and extracting some street justice.

Deaths by police shootings? Don’t get mad. Don’t take to the street. Let the justice system screw you over, if you get a day in court at all.

So you’ll have to forgive me if I’m not mad at Michelle Obama using a conversation with her homegirl Oprah to let the world know that she’s kind of had enough.

But if you can’t, I have just one response to that.

O&O on the Outs? Report says Oprah refuse to help with ObamaCare?