Give us all of the Bush record 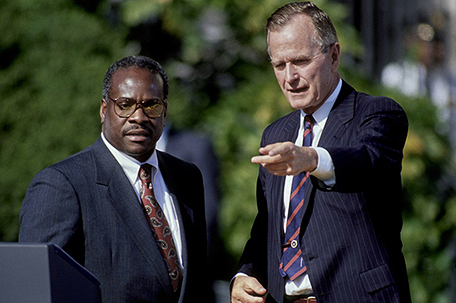 The death of almost any president is an occasion for glowing tributes, the challenge being to tell the truth without offending sensibilities. And including the sensibilities of readers and viewers of color, whose recollections might not match those of the “mainstream.”

While Bush, who died on Friday Nov. 30, is rightly being praised for his demeanor and character (especially in comparison to the 45th president) and such accomplishments as passage of the Americans for Disabilities Act, he is also the president who gave us Supreme Court Justice Clarence Thomas, promoted Lee Atwater, who gave the nation the Willie Horton bogeyman, and had subordinates lure an African-American teenager to the park across from the White House to buy crack.

One-dimensional portraits do not serve the quest for truth very well; we all have our pluses and minuses. Understanding them adds to our appreciation of the human condition.

The lured teenager was Keith Jackson, who told the agents who enticed him that he didn’t even know where the White House was.

“He was the 18-year-old who was charged with (but acquitted of) selling the bag of crack that President Bush held up during a nationally televised speech on the nation’s drug problems in September 1989,” Jefferson Morley wrote in 1993 for the Washington Post.

“The idea of holding up a bag of crack had been dreamed up in the summer of 1989 by a clever speechwriter from Yale. Bush liked the idea. Phone calls went from the White House to the attorney general’s office to the Drug Enforcement Administration to the local police. The request-cum-order: Lure somebody — anybody — to Lafayette Park and buy crack cocaine from him.

“Keith Jackson, at the time, was a suspected entry-level dealer who was just starting his senior year at Spingarn High School. He lived with his mother, younger brother and grandfather on M Street NE. His friends described him as loyal, easy-going and popular with girls.

“His teachers found him pleasant and consistently gave him D’s. Keith said he wanted to be a barber. He had also sold cocaine on four occasions to undercover government agents. All the president’s men set him up as their sucker. . . .”

“Agents had been cultivating him in the hope that he could lead them to bigger players in the distribution network of Rayful Edmonds, one of the biggest drug dealers in Washington. They didn’t arrest him after the undercover buy because they really wanted a bigger dealer.

“After Bush’s speech, the agents had to abandon that plan. They feared that Jackson or somebody close to him might have seen the president talking about crack purchased in Lafayette Park and realize he had been set up. Jackson was arrested.

“Shortly thereafter, The Washington Post revealed how the crack sale had been arranged. When reporters badgered Bush about the propriety of the set-up, the president responded angrily, ‘You don’t have any sympathy for this drug guy, do you?’

“Not really. When Keith Jackson went on trial in December 1989 on five counts of selling drugs, there was not much media attention. The jury could not reach a verdict, and a mistrial was declared. He was retried in January 1990 and convicted for two of the cocaine sales to the undercover agents.

“Under the provisions of a tougher anti-drug law passed (with the vocal support of George Bush) in 1987, Judge Stanley Sporkin had no choice but to sentence Jackson to a mandatory minimum sentence of 10 years. Jackson is now serving his time in a federal prison in Petersburg, Va. . . .”

Thomas was chosen for the high court after Bush, a moderate-turned-conservative, was faced with a vacancy after the venerated Thurgood Marshall, the first African-American Supreme Court justice and a civil rights hero, decided for health reasons that he could no longer hold on to his seat.

“Now his worst fear was that a Republican White House, in a political move designed to disarm its liberal opponents, would replace him with a Black nominee who shunned the very civil rights agenda for which Marshall had spent his life fighting,” Jane Mayer and Jill Abramson write in their 1994 book, “Strange Justice: The Selling of Clarence Thomas.”

“Marshall had often ridiculed Clarence Thomas and his fellow conservatives as ‘the goddamn Black sellouts’ who directly benefited from legal remedies such as affirmative action and then denounced them.

“Marshall would shake his head in wonderment that a Black man who grew up in Jim Crow Georgia, and who had benefited from a thousand affirmative actions by nuns and others, and who had attended Yale Law School on a racial quota, could suddenly find affirmative action so destructive of the character of Black people,’ observed Carl Rowan, one of the few journalists to whom Marshall granted interviews. . . .”

The nomination divided African-Americans, many of whose leaders opposed Thomas but heard many in their rank-and-file urging, “give him a chance.”

Kevin Merida and Michael A. Fletcher added in their “Supreme Discomfort: The Divided Soul of Clarence Thomas” — published in 2007– that Republicans saw what seemed like a contradiction. “On the one hand, Bush was adamantly opposed to racial preferences.

“On the other hand, he was seeking to replace a legendary Black Supreme Court justice with another African-American judge who seemed relatively junior for the job. Thomas had been on the appeals court bench, his only judicial appointment, for just fifteen months.”

Bush insisted, “The fact that he is Black and a minority had nothing to do with this in the sense that he is the best qualified at this time.”

Thomas’ nomination is best known for the contentious hearings after Anita Hill’s sexual harassment allegations against Thomas and his responses that he was being subjected to “a high-tech lynching.” The White House worked to discredit Hill. He was confirmed.

In a 1992 editorial, the New York Times called Thomas the “youngest, cruelest justice.”

In an obituary credited to “Michael Oreskes and special to the New York Times,” the Times wrote:

“Friends said Mr. Atwater spent his final months searching for spiritual peace. The man renowned for the politics of attack turned to apologies, including one to Michael S. Dukakis, the Massachusetts Governor who was the 1988 Democratic Presidential nominee.

“Mr. Dukakis was the target of a campaign advertisement about Willie Horton, a Black convicted murderer who escaped from the Massachusetts prison system while on a weekend furlough and raped a White woman and stabbed her husband. The advertisement became a central focus of the 1988 campaign.

“In 1988, fighting Dukakis, I said that I “would strip the bark off the little bastard” and “make Willie Horton his running mate,” ‘ Mr. Atwater said in the Life article.

“I am sorry for both statements: the first for its naked cruelty, the second because it makes me sound racist, which I am not.’

“Asked today about Mr. Atwater’s apology, Mr. Bush replied: ‘I found that very interesting and very enlarging. I think as he took stock of his life, he wanted to make things right and heal some wounds, and that was a very noble thing.’ . . .”

Some are starting to call out the effusive coverage. “In this historian’s reckoning, self-interest prevailed too often over principle,” David Greenberg, a professor of history and journalism and media studies at Rutgers University, wrote in an assessment Saturday for Politico Magazine.

Others will have noticed a little-publicized report from MSNBC’s Rachel Maddow that Bush was asked to and did intercede in an attempt to shut down a federal investigation into Vice President Spiro Agnew in the Baltimore US Attorney’s office.

To others, Bush’s 1988 comment about the “little brown ones,” referring to three children of Bush’s son, Jeb, and his Mexican-born wife, Columba, resonates.

Still others recall that Condoleezza Rice, later secretary of state, arguably first became nationally known under Bush 41, when she was Soviet and Eastern Europe affairs adviser on the National Security Council. Or they recall the 1989 invasion of Panama.

Being selective in our memory is only human. As Greenberg wrote, “The urge to prettify a politician’s legacy upon his demise is understandable and in some ways reflects our finer selves. Bush’s family, friends and admirers deserve comfort in their grief.”

However, he added, “But when it comes to presidents and historical actors of consequence, we also need critical dissent. . . .”

“Give Me Liberty Or Give Me Death!”