Why do we get so worked up over the N-word? 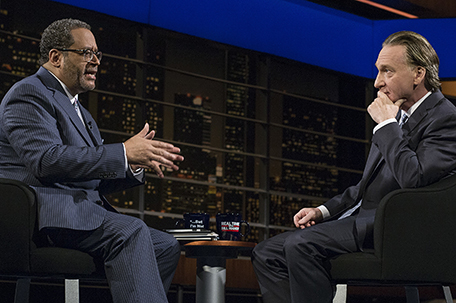 ABOVE PHOTO:  Bill Maher, right, appears with professor and author Michael Eric Dyson during a broadcast of “Real Time with Bill Maher,” in Los Angeles. Many African Americans expressed disappointment on June 2 when Maher uttered the N-word on his late-night cable television show. (Janet Van Ham/HBO via AP)

TV host Bill Maher intemperately uses the N-word. Then a pack of Black celebrities and academics feverishly debate the propriety of it. And then everyone within and without earshot is off to the races, endlessly chattering about it. I’ve seen this so often that it’s almost ritual. A White celeb, politician — or in the case of Maher, a talk show host — tosses out the word and the public’s blood pressure rises. The debate over it gets especially heated among Blacks. Some defend it. Some rail against it.

I remember a few years back during yet another round of hot debate on the word there was a momentary national campaign by Black activists to ban the use of the word. There was even a website that hawked T- shirts, DVDs and exhorted Blacks, especially young Blacks, to solemnly pledge not to use the word or patronize anyone who puts out products that use the word. Presumably, that was aimed at rappers  —  and a popular comic strip writer — who turned the N-word into a lucrative growth industry.

The anti-N-word campaigners then and now are both right and wrong in assailing the N-word. There’s no disagreement that the term hurled by White bigots is vile, offensive and hate-filled. And that it has caused much personal pain and suffering. But that’s where agreement ends. Many rappers have made a mighty effort to stand the word on its head, and take the hurt out of it. Their effort has some merit, and is not new. Dick Gregory had the same idea some years ago when he titled his autobiography, “Nigger.” Black writer Robert DeCoy also tried to apply the same racial shock therapy to whites when he titled his novel, “The Nigger Bible”. Richard Pryor, before his epiphany on its use, for a time made the term practically his personal national anthem.

Though words aren’t value neutral and are often used to promote hate, they in themselves don’t trigger racial violence, or psychologically destroy Blacks. The N-word did not stir the century of Jim Crow violence, segregation, disenfranchisement, and poverty that Blacks suffered. That was done to preserve White political and economic power, control, and privilege. But even in those days, when a White person, especially a celebrity, athlete or public official, slipped and used the word or made any overt racist reference, Black outrage was swift and ferocious. The NAACP even pushed Merriam Webster dictionary to purge the word.

The word in and of itself is not a code sign for discrimination, or a trigger to commit racial violence. The outcry, however, pointed to the double standard far too many Blacks apply to whites. In the past, a small band of activists waged war against the use of the word by Blacks.

They have been the exception. Blacks have been more than willing to give other Blacks that use the word a pass. The indulgence sends the subtle signal that the word is hardly the earthshattering, illegitimate word that many Blacks and whites brand it.

Maher didn’t publicly say it, but he probably could have, and that’s that his Black friends routinely use the word. A hip-hop record producer who weighed in on the controversy partially backed him up, and said that the word had lost some of its sting since White hip hoppers use the word and do not mean any offense by it. It was self-serving ploy by a defendant grasping to paint himself as bigotry-free. But the point was a good one.

That’s not the only reason the N-word debate is suspect. Put bluntly, don’t we have more important things to worry about? Trump, and all he represents, failing inner city public schools, the near Depression level unemployment among young Black males, the more than one million Blacks that pack America’s jails, the surging homelessness numbers, which Blacks make up a disproportionate share of, the wholesale assault on public education, affordable health care, the gut of voting rights, civil rights and labor protections, and the continuing cycle of crime and violence, hopelessness, desperation, that wracks some poor Black communities. Yet, there are few impassioned panels, pulsating websites, marches and demonstrations by Blacks demanding action on these crisis problems.

Earl Ofari Hutchinson is an author and political analyst. He is an associate editor of New America Media. He is author of “Cosby: The Clash of Race, Sex and Celebrity” (Amazon Kindle). He is a weekly co-host of the Al Sharpton Show on Radio One. He is the host of the weekly Hutchinson Report on KPFK 90.7 FM Los Angeles and the Pacifica Network.

Black players get the flag with NFL’s N word ban