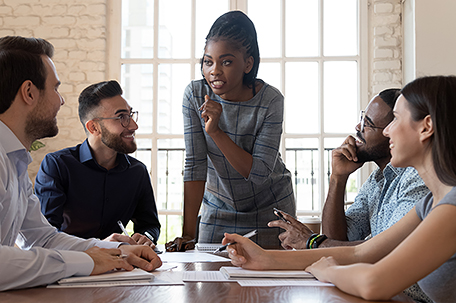 In 2010, after interviewing 1600 CEOs, IBM concluded new thinking and redefining the status quo are leadership skills essential to achieving and institutionalizing change.

Poverty, education, gun violence and Black business growth have been Philadelphia challenge for decades. With conditions getting worse, not better, the need for change is captured in the Latin phrase “res ipsa loquitur,” which means “the thing speaks for itself.”

Are Philadelphia’s leaders prepared to engage in new thinking or doubling down on working harder at what has failed in the past? History suggests doubling down and updating old thinking.

For example, private sector employment and procurement tools are world class but broken as relates to Black participation. Nonetheless, established beliefs and social norms make it second nature for white leaders to conclude Black individuals and businesses, not the system, are broken and require improvement.

Black and white leaders need to organize an unprecedented partnership, including emerging voices committed to disruptive new thinking, achieving proportionate Black wealth, and leveling the playing field for Blacks across the economic spectrum.  Addressing systemic and institutional racism, white privilege and unconscious bias requires a new level of honesty, trust, interdependence, objective communication, and commitment to addressing historical discrimination. Leaders need to act, as status disruptors, with purpose and courage.  Current leadership discussions about equity encompass Black and brown communities, but Black Lives Matter is grounded in slavery, Jim Crow and America’s unique Black history. Equitable recovery is a Black and brown issue, but Blacks cannot be further discriminated against to balance the scales. Balancing the scales is a leadership equity test.

This memo speaks from a Black perspective — not to dismiss others, but to magnify the unique and long suffering Black experience. Because Blacks will be further behind the “8 ball” after the COVID-19 pandemic, Black equity cannot be pigeonholed in pursuit of the new normal or the victim of “let’s not let the perfect get in the way of the good.”

Blacks must proportionately participate in the redistribution of wealth, realigning public and private sector spending, and integrating employer demographics from janitors to CEOs. The equation is the prescription for a new status quo.

Intellectually, achieving this “mission impossible” should not be overwhelming, given the power available to the potential partners. However, because the prescription will produce Black winners and white losers in space traditionally occupied by whites, delivering change will be politically complicated.  A disproportionate number of whites believe affirmative action has already “gifted” more than a fair share. The wild card is the role white public and private sector leaders assume. You must be architects and not just advocates. There is a history of Black excellence achieved in a David and Goliath anticipated mismatch.

Black CEOs must be role models for Black employment and contracting. A new normal cannot be achieved without your changed behavior and discretionary decision making, and the underperforming of affirmative action programs and corporate citizenship investments should be a clarion call for change. Real change requires more than term limited spending increases with Black businesses and support organizations. CEOs should convene to plan how to allocate resources and establish protocols to build capacity for Black businesses to improve the quality of life and safety in neighborhoods where employees live, and to establish internal cultures where Black equity is a realized norm and core value.

CEOs and diverse leaders should partner with City Council and the United Way to address poverty, education, gun violence and minimum wages, issues that make Philadelphia a tale of two cities. At this inflection point, will leaders inspire public confidence or continue to allow 25% of Philadelphians to live in modern day slavery and/or work forty hours per week for slave wages? The social norms that tolerate families living in poverty and deep poverty, while looking the other way. says something about our values. There is a need to mature beyond out of sight, out of mind and patting ourselves on the back for good deeds and intentions.

As elected officials, candidates and Black and white leaders tackle racially-charged challenges, the Kennedy-Johnson decade is a role model for interracial partners and performance. Their partnership changed generations of Black lives, including many Philadelphians, and was a precursor to Philadelphia’s independent Black political movement.

White leaders raised expectations, after Philadelphia Magazine’s story “Being White in Philly,” but inclusive growth has not materialized. Economic recovery strategies treat blacks like patients, while businesses and institutions are left to self-correct, i.e., increased spending solves all problems. Is the spending new or a reallocation of dollars in existing budget categories? Unless increased spending increases the overall percentage of spending with protected class businesses, it simply increases competition among protected classes with no impact on traditional prime and tier one subcontractors. There also is a need to get small to mid-sized businesses —who traditionally have not had diversity and inclusion programs —substantively engaged in ongoing conversations.

“Frustration Among Good Intentions” is a personal reaction to America’s cliff notes version of Black history, the challenge associated with multicultural relationships and celebrating symbolic and historic accomplishments as evidence of change. American education rationalizes century to century, generation to generation white wealth built on slave labor and victimized sharecroppers. Black and white Americans continue to live on opposite sides of the coin, and there is no movement toward reparations, a redistribution of wealth or equitable relief.

There is considerable push back in my conversations with colleagues about multicultural relationships, but when asked about Black friends invited to family and friend gatherings, the usual answer is “NONE!”

Systemic and institutional racism, white privilege and unconscious bias remain 800 pound gorillas in 2021. Poverty and underfunded schools are rationalized, while developers get abatements to fund gentrification. Procurement programs include white women, who benefit from privilege and bias, as protected class members, causing a reduction in percentage spending with black businesses. Economic recovery conversations have become less about racism, privilege and bias and more about seeing recovery through an equity lens, which will discriminate against Blacks.

New voices with energy and challenging perspectives must be invited to leadership tables, heard objectively and treated like peers. Communities are looking for leaders willing to put themselves at risk, not risk averse armchair quarterbacks with experience but dated perspectives. New thinking is required to redefine the status quo.

Affirmative action programs measure success numerically but fail to measure their impact on careers or preparing Black businesses to compete in the mainstream economy. Giving affirmative action directors higher profiles without power is a prescription for continued under performance. Band Aids must be replaced by scalable solutions, and CEOs must establish higher performance, accountability and review standards for Procurement, Project Management, Human Resource and Diversity & Inclusion officers. CEOs also must take affirmative ownership of eradicating systemic and institutional racism, white privilege and unconscious bias. A failure to establish new mandates and evaluation tools will reaffirm the flawed belief that working harder on old strategies will save the day.

COVID-19, George Floyd and the 2020 elections have triggered an anchor lap in a divided country. President Biden believes he can work with Senator McConnell, but should remember George Wallace was pro-civil rights, until racism became his ticket to power. Abraham Lincoln’s party must reign in Republicans driven by selfish interpretations of the first and second amendments and fear of America becoming a majority minority country. White men with guns are searching for me and other Black men randomly. White police officers are disgraced, but free, after violently taking black lives without cause.

President Kennedy in 1960 said going to the moon would be hard, because there was no existing formula. Despite decades of trial and error, no formula exists in Philadelphia for unity and Black Lives Matter. Leaders must answer the question asked in “Bad Boys for Life,” where are we going?

Frustration With Racism Is Coming to the Ballot Box