Why the friendly skies aren’t so friendly to the Dr. David Daos 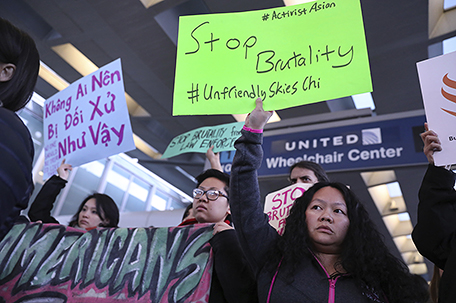 ABOVE PHOTO:  People with Asian community organizations from Chicago hold signs to protest after Sunday’s confrontation where David Dao, 69, of Elizabethtown, Ky., was removed from a United Airlines airplane by Chicago airport police at O’Hare International Airport, during rally near United’s counter at the airport’s Terminal 1 in Chicago on Tuesday, April 11, 2017. (Chris Sweda/Chicago Tribune via AP)

Louisville Dr. David Dao has taken the high road so far in the furor over his getting mauled, manhandled, and then summarily booted from a United Airlines flight. He has expressed thanks and appreciation to the thousands who have cheered and expressed their outrage over his mistreatment by United. Now that’s a sharp contrast to what Dao reportedly said and shouted before his ejection. He minced no words and said that he was being kicked off because “I’m Chinese.” [As of April 13, 2017, Dr. Dao announced through his attorneys that he was suing United.]

There is, of course, no smoking gun evidence that Dao was singled out because he’s Chinese, no slurs at him by any of the agents that confronted him, and no discernible pattern of booting other Asian passengers from United or any other airlines. However, there are several reasons that the Dao ejection rams the issue of racial profiling back into ugly glare. The rules on who can or can’t get bumped from a flight are hardly the model of precision. They include such things as whether passengers can conveniently catch a connecting flight, to unaccompanied minors, to those with disabilities. The selection process then pretty much boils down to a judgment call by the airlines. And it was that seemingly less than randomness that instantly prompted Dao to scream that he was singled out because he was Chinese. The horrendous, “cover your rear” statement by United CEO Oscar Munoz, stating that Dao was being belligerent and thus he got– and deserved — the roughhouse treatment simply confirmed that Munoz was not simply a clueless CEO, but had rushed to typecast Dao as the villain in the sorry drama.

If that wasn’t enough, the dirt quickly flew about Dao. The narrative was no longer that Dao was a respected doctor, brutalized by the dictate of an insensitive airlines and strong arm cops. Now he was a doctor with a shady past. He was convicted of drug dealing and had his license suspended. Unless United and the cops that bounced him from the plane were clairvoyants, there was no way they could know this. And even if they did there’s nothing in any of the overbearing guidelines about who can or can’t be bumped from a flight or that someone convicted of a crime must get the boot from an overbooked flight. It was the hideous old ploy that we’ve seen time and again when police are on the hot seat for gunning down or brutalizing a minority. That is dig up any dirt, usually a criminal record of the victim, and plaster it all over the front pages. The implication being that the victim was a bad guy and deserved what he got.

In 2016, the mounting allegations of racial profiling on airlines raised the hackles of the Congressional Asian Pacific Caucus. It sent a pointed letter to an airlines industry group demanding to know the policy of the airlines in regard to dealing with Arab and Muslim passengers. By then the screams of “flying while Muslim” on airlines had risen to a roar. It had prompted several lawsuits and protests by Muslims over alleged profiling that included being subject to detention, given the third degree during security checks, and being ejected from a flight.

The airline group gave the pro-forma response. It denied the targeting charge and claimed that the airlines adhered to a rigid policy of non-discrimination. The Caucus pushed hard to get the airlines to spell out exactly what steps it took to ensure that passengers weren’t singled out because of their religion or ethnicity on flights. It also asked whether the airlines required diversity training for its employees. There was no indication that the airline group ever provided the Caucus a detailed accounting of just what the airlines do to back up their claim that their employees don’t engage in profiling.

Even after the colossal fallout from the brutalizing of Dao, United’s grab at damage control still didn’t include any detailed account of what it does to ensure that as the airlines fondly put it that all passengers are treated with dignity. It still offered the usual vague, PR pablum that the airline is reviewing its policies and making changes where needed to insure there’s no repeat of the Dao incident.

Time will tell whether United can completely dodge the bullet from the outrage. However, time has told that there are just enough horror stories involving airline passengers that look like Dao and certainly Muslim passengers to make a mockery of the airlines claim that their friendly skies are anything but friendly to the Daos.

Earl Ofari Hutchinson is an author and political analyst. He is the author of the forthcoming ebook How the Democrats Can Win in The Trump Era (Amazon Kindle). He is an associate editor of New America Media. He is a weekly co-host of the Al Sharpton Show on Radio One. He is the host of the weekly Hutchinson Report on KPFK 90.7 FM Los Angeles and the Pacifica Network.

CHICAGO — United Airlines is changing a company policy and will no longer allow crew members to displace customers already onboard an airplane.

The change comes after a passenger, Dr. David Dao, was dragged from a fully-booked United Express flight in Chicago because he refused to give up his seat to make room for crew members. Cellphone video of the incident sparked widespread outrage and created a public-relations nightmare for United.

Under the change outlined in an internal April 14 email, a crew member must make “must-ride” bookings at least 60 minutes prior to departure. Crews could previously be booked until the time of departure.

United spokeswoman Maggie Schmerin said in an email Sunday that the change is an initial step in a review of policies and it’s meant to ensure that situations like Dao’s never happen again.