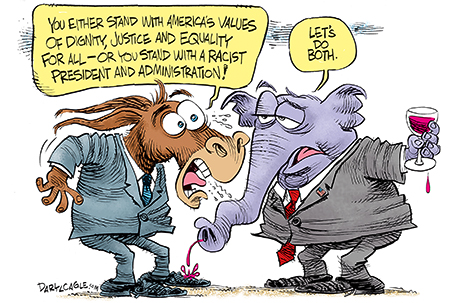 Forget for a brief moment Trump’s vile, unabashed racist “sh**hole nations” slur of Haiti and African nations. This was simply Trump being Trump. There were two more telling things that came out of the latest Trump debacle.

The first is what the GOP senators in the room with him said and did about the slurs. They ducked, dodged, denied, and played a “hear no evil, see no evil,” game. When the public furor couldn’t be ignored any longer, they retreated into silence. The one exception was South Carolina Senator Lindsay Graham. When the heat got too much, he belatedly claimed that he chided Trump, reminding him that this is a nation of diversity, not of race. Now, all we have is Graham’s word that he dressed his party’s titular head down for his racism. Maybe yes, maybe no. The point is that whatever he did or said came after the fact.

The other even more telling thing is that anyone would be the least bit surprised that the GOP’s wise men said and did nothing about Trump’s slurs. Trump’s slurs, then his denials, and then his clam up about it, was simply Trump taking his cue from his party.

On a cable talk show appearance in 2010, Senate Minority Leader Mitch McConnell flatly refused several direct, angled, and nuanced efforts to discuss racism in the Tea Party. McConnell’s none too subtle refusal to weigh in on the issue was in direct response to the NAACP’s resolution demanding that the Tea Party speak out, and speak out loudly against the racists among them.

Long before the NAACP stirred debate on Tea Party racism with its resolution, a legion of Democrats, civil rights leaders, and even an online petition from an advocacy group begged the GOP to speak out against its naked bigots. No go.

There’s a good reason. The GOP would cut its throat if it denounced its racists and racism, and really meant it. The shouts, taunts, spitting, catcalls, “Obama as Joker” posters, n-word slurs, Confederate and Texas Lone Star flag waving by some Tea Party activists, and the deafening silence from GOP leaders during Obama’s early years in office, was and still very much is an indispensable political necessity for the party.

Trump has bragged time and again when he gets caught with his racist drawers down that he’s just as popular as ever with his base. That being White, male, rural, evangelical, with no college degree. He’s right about that, and the polls pretty much back him up. The point is when he pops off they love it, and slap their thighs with howls of laughter. To them that’s Trump telling the GOP establishment and anyone else to shove it, and saying it in the vilest of street language. The “sh**hole nations” dig was no exception. The only add-on to that was that he crudely said what legions of his backer’s believe and fear about immigrants of color allegedly flooding this country from alleged hellholes like Haiti and African nations.

The spark to reignite the GOP’s traditional conservative, White male loyalists, and increasingly White female supporters, has always been there. The GOP could not have been competitive during the 2008 and 2012 campaigns, and most importantly the 2016 campaign, without the bailout from White male voters. Much has been made that they are a dwindling percent of the electorate, and that Hispanics, Asian, Black, young, and women voters will permanently tip the balance of political power to the Democrats in coming national elections. Blue-collar White voters have shrunk from more than half of the nation’s voters to less than 40 percent.

The assumption, based solely on this slide and the increased minority population numbers and regional demographic changes, is that Trump and the GOP’s White vote strategy is doomed to fail. This ignores three political facts: 1) Elections are usually won by candidates with a solid and impassioned core of bloc voters; 2) White males, particularly older White males, vote consistently and faithfully; 3) they voted in a far greater percentage than Hispanics and Blacks.

The GOP leaders have long known that blue-collar and a significant percent of college educated, White male voters, who are professionals, can be easily aroused to vote and shout loudly on the emotional wedge issues, with immigration now front and center on the list.

These are the voters that GOP presidents and aspiring presidents, Nixon, Reagan, Bush Sr. and George W. Bush, McCain and Romney, and an endless line of GOP governors, senators and congresspersons have banked on for victory and to seize and maintain regional and national political dominance.

The GOP senators in the room that day with Trump, when he took his racist shot really didn’t hear him say anything racist. With elections to win, they couldn’t afford to.

Earl Ofari Hutchinson is an author and political analyst. He is the author of the forthcoming 50 Years Later: Why the Murder of Dr. King Still Hurts (Middle Passage Press). He is a weekly co-host of the Al Sharpton Show on Radio One. He is the host of the weekly Hutchinson Report on KPFK 90.7 FM Los Angeles and the Pacifica Network.