Foolish words in the wake of tragedy 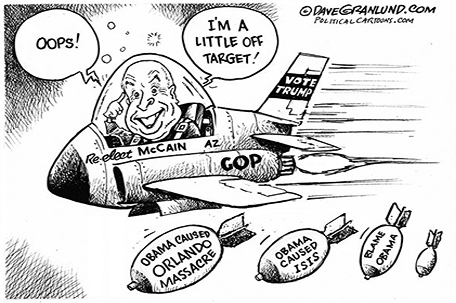 The cretin who took an assault weapon into Pulse, an Orlando nightclub, on “salsa night” is beneath contempt.   Was his target the LBGTQ community, Latinos, or simply human beings?  After all, it is somewhat reductive to simply describe Pulse as a “gay club”. It catered to the LBGTQ communities and its allies. Some of those who were massacred were not gay.  They just wanted to dance.

In the wake of the massacre of 49 people, and the injury of another 53, the networks have offered sunup to sundown coverage.  Analysis and opinions have been more than plentiful.  Some of the most disgraceful comments came from Senator John McCain, who blames President Barack Obama for the massacre in Orlando.  To be sure, the Senator quickly retracted his words and said that he “misspoke”.  But he started out by saying that he held President Obama “directly responsible” for the massacre in Florida.  He explained that because President Obama pulled US troops out of Iraq, he created the vacuum that ISIS came to fill.

McCain was harsh in his excoriation of President Obama, and his harshness was misplaced when it was issued, on the same day that President Obama visited Orlando to meet with the families of those murdered.  If you look into a dictionary under “sore loser” you will find a photograph of McCain.  He still has not recovered from the whipping he took when then-Senator Obama beat him for the Presidency.  While he can only blame himself, his poorly executed campaign, and his poor choices (Sarah Palin, anyone?), he is far more comfortable venting against President Obama than he is exploring his own failures.

Florida’s governor, the Republican Rick Scott is another who has made unfortunately inappropriate statements.  Deflecting questions about assault weapons, he said he prefers to talk about eliminating ISIS.  He behaves as if legislators have only a one-track mind.  While it is appropriate to talk about managing ISIS, it is also appropriate to talk about the easy access that anybody has to assault weapons. If you are on the no-fly list, the adage goes, you ought to be on the no-buy list.  Not that it helps as much as it should – there are too many ways to buy guns, ammunition, and body armor both over and under the table.

It does not erode anyone’s second amendment rights to restrict their right to assault weapons.  One does not need a weapon with multiple rounds to protect oneself or, for that matter, to “hunt”.  Whenever those NRA folks start talking about hunting, though, I really want to know what (who) it is they want to hunt.  It is entirely appropriate to restrict access to assault weapons, but for some reason rabid Republicans resist.

President Barack Obama has had to take on the role of Empathizer-in-Chief several times during his Presidency.  In the last year, he has had to deal with the killings at Emanuel AME Church (June 2015, 9 casualties), at the Chattanooga Recruiting Center (July 2015, 4 casualties), the Roseburg Community College shootings (October 2015, 10 casualties), the San Bernardino Community Center shootings (December 2015, 14 casualties), and now the tragedy in Orlando.  He has been consistent in calling for assault weapons bans, and his opponents have been consistent in opposing such bans.  And they have been irresponsible in their rhetoric of opposition.  Senator John McCain stands at the tip of the iceberg.

Donald Trump is worse than Senator McCain.  He has said that our President is sympathetic to ISIS terrorists.  Like McCain, he quickly suggested that President Obama has some culpability in the Orlando massacre.  What nonsense!  Trump should be ashamed, if he is capable of such, for turning a tragedy into political manipulation.   So should McCain.

McCain says he “misspoke”, but what he really needs to say is that he apologizes.  He has no right to accuse President Obama of being “directly responsible” for the Orlando killings.  He was wrong, simply wrong.  His statement was not a slip of the lip, but a calculated attempt to disparage our President, and for partisan purposes.  McCain has been a victim of Donald Trump’s venom.

In the wake of a tragedy, our nation’s leaders ought to follow our President’s leadership in offering empathy.  We ought also look at ways to prevent further tragedy.  Banning assault weapons is one way to offer some solutions, and some Democrats have attempted to deal with that, despite resistance.  Loose lips are inappropriate in the wake of this tragedy.  Shame on you, Donald Trump and John McCain, for attempting to turn tragedy to your political advantage with your foolish words.

Julianne Malveaux is an author and economist. Her latest book “Are We Better Off? Race, Obama and Public Policy” is available via juliannemalveaux.com or amazon.com