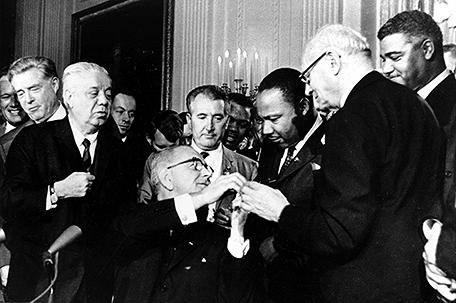 ABOVE PHOTO:  In July 2, 1964, President Lyndon B. Johnson reaches to shake hands with Dr. Martin Luther King Jr. after presenting the civil rights leader with one of the 72 pens used to sign the Civil Rights Act in Washington. Surrounding the president, from left, are, Rep. Roland Libonati, D-Ill., Rep. Peter Rodino, D-N.J., Rev. King, Emanuel Celler, D-N.Y., and behind Celler is Whitney Young, executive director of the National Urban League. President Barack Obama was 2-years-old when Johnson signed the Civil Rights Act. Half a century later, the first black president will commemorate what’s been accomplished in his lifetime. He’ll also recommit the nation to fighting deep inequalities that remain.  (AP Photo)

The commemoration of the 50th anniversary of the passage of the monumental 1964 Civil Rights Act  was accompanied by a wave of celebratory events back in April at the Lyndon Baines Johnson Presidential Library in Austin, Texas. President Barack Obama gave the keynote address and three other living presidents, Jimmy Carter, George W. Bush, and Bill Clinton also gave their thoughts on the significance of the Act. They paid due homage to the profound impact the Act had in serving as a powerful wrecking ball that demolished the walls of legal segregation and ushered in an era of unbridled opportunities for many blacks. The changes are unmistakable today. Blacks are better educated, more prosperous, own more businesses, hold more positions in the professions, and have more elected officials than ever before.

Yet the towering racial improvements since Johnson put pen to the bill a half-century ago masks a harsh reality. That reality is that the challenges and threats to civil rights 50 years later are, in some ways, more daunting than what Johnson, Martin Luther King, Jr., and other civil rights leaders of that day faced.

When Johnson signed the bill, black leaders had already firmly staked out the moral high ground for a powerful and irresistible civil rights movement. It was classic good versus evil. News coverage featuring gory scenes of baton-wielding racist Southern sheriffs, fire hoses, police dogs and Klan violence unleashing violence against peaceful black protestors sickened many white Americans. Racial segregation was considered immoral and indefensible, and civil rights leaders were hailed as martyrs and heroes in the fight for justice.

As America unraveled in the 1960s in the anarchy of urban riots, campus takeovers, and anti-war street battles, the civil rights movement and its leaders fell apart, too. Many of them fell victim to their own success and failure. When they broke down the racially restricted doors of corporations, government agencies, and universities, it was middle-class blacks, not the poor, who rushed headlong through them. As King embraced the rhetoric of the militant anti-war movement, he became a political pariah shunned by the White House, as well as mainstream white and black leaders.

King’s murder in 1968 was a turning point for race relations in America. The self-destruction from within and political sabotage from outside of black organizations left the black poor organizationally fragmented and politically rudderless. The black poor, lacking competitive technical skills and professional training and shunned by many middle-class black leaders, became expendable. Some turned to gangs, guns and drugs to survive.

A Pew study specifically released to coincide with the 50th anniversary of the March on Washington celebrations in August 2013 graphically made the point that the economic and social gaps between whites and African-Americans have widened over the last few decades despite massive spending by federal and state governments, state and federal civil rights laws, and two decades of affirmative action programs. The racial polarization that was endemic between blacks and whites regarding the George Zimmerman trial was just another manifestation of the different ways that blacks and whites perceive of the workings of the criminal justice system.

A half century later, the task of redeeming the promise of the Civil Rights Act means confronting the crises of family breakdown, shamefully failing public schools, racial profiling, housing segregation, the “New Jim Crow” of racial disparities in the prison and criminal justice system, the swath that HIV/AIDS has cut through the Black Community, the gutting of affirmative action, and the full blown assault on the Voting Rights Act by Republican ideologues. These beguiling problems, problems that King and the civil rights movement of his day had only begun to recognize and address, define today’s racial battles. Also, unlike the civil rights leaders of yesteryear, today’s civil rights leaders have to confront the fact that the sympathy and goodwill of millions of whites, politicians, and business leaders enjoyed by their elders in the peak years of the civil rights movement is mostly nonexistent. Because there is a belief that blacks have attained full equality, much of that goodwill is gone. Things have regressed to the point that many believe the 1964 Civil rights Act probably wouldn’t pass through a GOP controlled, heavily tea party influenced House today.

Then there’s the reality that racial matters in America can no longer be framed in an exclusively black and white paradigm. Latinos and Asians have become major players in the fight for political and economic empowerment and figure big in the political strategies of Democratic and Republican presidential contenders. Today’s civil rights leaders will have to figure out ways to balance the competing and sometimes contradictory needs of these and other ethnic groups and patch them into a workable coalition for change.

Still, civil rights leaders can draw strength from the courage, vision and dedication of those who battled for the 1964 Civil Rights Act’s passage. They can and must continue to fight hard against the racial and economic injustices that still plague the nation 50 years after Johnson’s landmark signing.

Earl Ofari Hutchinson is an author and political analyst.