Fall back Sharpton–Time for the youth to lead 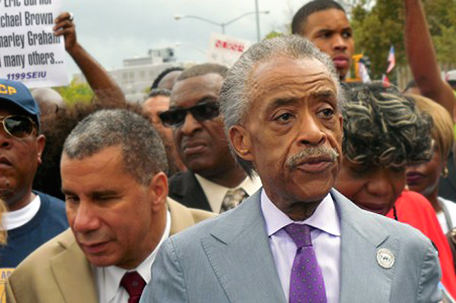 Thanks to the decisions by grand juries in Ferguson, Mo., and New York City, the Rev. Al Sharpton has put his marching shoes on.

He wants to clog the streets of Washington, D.C., on Dec. 13 to protest the decisions that left former Ferguson Police Officer Darren Wilson and New York City Police Officer Daniel Panteleo unpunished for the shooting death of Michael Brown and the choking death of Eric Garner, respectively.

Don’t get me wrong. I like a good march as much as the next person. Gives me a chance to exercise and see folks that I only see when covering a march.

But Rev. Sharpton ain’t the guy to do it.

I’m not saying that because I don’t like Rev. Sharpton, or because I suddenly agree with the folks on Fox News who are stupid enough to think that he’s a racist because he points out racism.

I’m saying it because it’s time for Rev. Sharpton, the Rev. Jesse Jackson, and anyone else who is on a first name basis with the Rev. Dr. Martin Luther King or Malcolm X to do something that they haven’t been willing to do.

Why Sharpton must let youth lead

Now I can already see some of you sucking your teeth and giving me the side-eye on this, but hear me out.

I have nothing but love and respect for the folks my age–which is 50–and older who have blazed the trail of the Civil Rights Movement. I totally understand  that without their work, I wouldn’t have the ability to write this column.

I also understand that they went through a lot to get us here. They still have the dog bite scars. The dents from being hit with high-pressure water hoses. The memories of those who went to Freedom Summer and didn’t come home or who crossed the Edmund Pettus Bridge and can still smell their own blood as it ran down their forehead after being beaten.

Those sacrifices give you a permanent place at the table…and it’s deserved.

But the fight has changed, and because it’s changed, it needs new leaders.

There are three things that the current “How To Get Away With Murder” relationship between unarmed black men and the police have exposed about Civil Rights organizations.

The first is that there are no succession plans, or the ones that are in place aren’t being implemented. Most of the time, organizations are replacing longtime presidents with people in that same age group, something that alienates the youth. Or worse, they bring in someone young, and won’t let them make any changes.

Probably the best example that I can come up with of this is Benjamin Jealous’s tenure as President of the National NAACP. When he took the job, I was hopeful because here was someone who was able to recognize what the modern Civil Rights movement looked like and had ideas to try and move the organization forward.

He left. The scuttlebutt was that he got tired of fighting with a board that wanted to sing “We Shall Overcome” from the hymnal owned by W.E.B. DuBois.

The second thing that appears to have been exposed is how disconnected young blacks are from the people who have been traditionally designated as their leaders.

When Rev. Jackson came to Ferguson, he was booed. At a meeting at the White House with some activists from Ferguson, many took to Twitter to express dismay at the way Rev. Sharpton treated them, not speaking with them, but taking credit for their work.

The last thing that it’s exposed is the lack of confidence we have in our youth.

The youth are leading already

When I brought up the whole idea of Old Heads ceding the floor to the youth and allowing them to lead, the two things I heard the most were: They don’t know what they’re doing, and; they don’t really want to lead.

The reaction to the events of Ferguson and New York shows that they do want to lead, because everything that’s gone on has been youth driven.

Young people are organizing the “die-ins” like the one held at Lincoln Financial Field on Sunday. They’re organizing the #NotOneDime and #BlackOutFriday protests and economic boycotts. They’re the ones on Twitter and Facebook getting their peers together to shut down the highways, fill up the public squares, and disrupt the public events so that the message of, “We’ve had about enough of this and we’re not going to take it anymore!” gets through.

As for the idea that the youth don’t know what they’re doing, well, we have only ourselves to blame for that. If our youth don’t know how to lead, it’s because we didn’t show them how, and we need to correct that.

It’s time for the youth to step up and take their rightful place at the head of the movement … and it’s time that we allow it to happen.

But that doesn’t mean there’s no place for us Old Heads, because there is.

What the Old Heads need to do

We need to be there to encourage the youth as they handle their business.

We need to be willing to use our contacts to help them connect to people who will help them get things moving. We should also be around to break a foot off in someone’s behind when its needed.

Since we have experience in strategy and organizing, let’s teach the youth. Since we have more money and more contacts to raise funds, let’s utilize that.

These kids are going to get arrested at some point. Let’s make sure that we have a group of pro-bono attorneys at the ready to get ‘em out.

We should be showing them our support because, let’s face it … the youth are more likely than all of us Old Heads to be on the other side of that gun, or that chokehold, or that prison cell.

Now I get why Rev.  Al wants to march. We have a criminal justice system that will give you six years for killing an elk, but will let a police officer kill an unarmed man without consequence in most cases. Something needs to be said about that.

But what Sharpton is missing here is that attention to these issues has already been brought.

New Yorkers brought it to the Christmas Tree lighting in Rockefeller Center on Wednesday night.

Youth all around the country have brought it. You don’t need to.

So instead of organizing a march, Rev. Al, why not bring these kids on your show and show them the support they need to keep going?

The children are trying to lead us. It’s their turn.

Denise Clay is a veteran journalist, a former adjunct professor, and an active member of the National Association of Black Journalists. She is a regular contributor to Solomonjones.com.