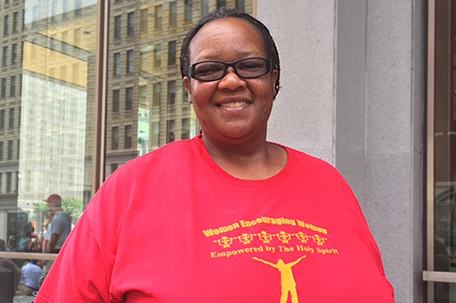 The protesters were steamed and growing hotter by the minute. As Bernie (Sanders) or Bust signs were marched around the concourse of the Municipal Services Building, an arrow pointed the way to the “revolution.”

Philadelphia has company. Delegates to the Democratic National Convention are here, along with protesters raging about a range of things and people, including the primary process, police tactics, fracking, gun control and Donald Trump.

As she always does, Sheila Hargrave took an afternoon meditation break from her job in the Municipal Services Building only to find the nearby speakers and rising temperatures competing for her attention in the space where she goes to find peace.

I asked her to imagine the world she wants to live in; the ideal place that all the protesters seek to create through their sacrifice and effort.

“It’s a place of love, with joy, peace and unity,” Sheila tells me. “People come together and stand for what is right. Of course, everybody has a different view of what’s right.”

As Sheila spoke, multiple protests/demonstrations were underway in the City of Brotherly Love. The Black DNC Resistance March Against the Capitalist & Racist Government was about to start in North Philly, where protesters were focused on the criminal justice system and police tactics. Earlier in the day, former Pennsylvania Gov. Ed Rendell had spoken a few blocks away on the need for gun control. Further south at Franklin Delano Roosevelt Park, the Bernie (Sanders) or Bust crowds were voicing unhappiness over the treatment of their candidate.

The City of Philadelphia estimated between 35,000 and 50,000 protesters would pour in seeking an audience with the thousands of journalists, citizen journalists, documentarians, police officers and bystanders such as Sheila.

With a soft-spoken voice, resolute determination (she plans to vote for Hillary Clinton) and put-you-at-ease respectfulness, Sheila brought a healing presence to the concourse. So did the Bernie Peacekeepers who handed out free bottled water. And so did the Rev. David Seacord, an American artist who exhibited his creation, “The Love Declaration,” nearby. He envisions a world where man loves his enemy, describing the “Love Declaration” as “a covenant for transforming humanity.” 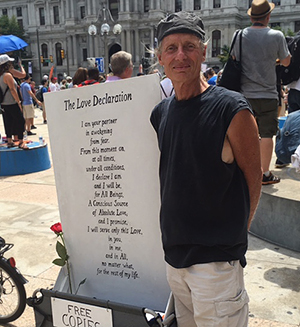 Every community has healers such as Sheila and David. They are community warriors seen and heard far too infrequently on radio or television. Try to imagine the news teasers: “Man Loves his Enemy. Film at 11 p.m.” Or, “Woman hands out free bottled water as the revolution begins!”

Still, healers were out in force in Philadelphia this week. I sought out a few of them. I wanted to know what they would do to heal a world saddled with mounting terrorist attacks, strained relations between police and much of the African-American community and families struggling to live on economic ledges.

Sheila actually had given this some thought earlier in the day. A co-worker’s brother had delivered some delicious barbecue. Afterwards, as they were cleaning up, talk turned to throwing away the leftovers. Then someone asked, “What if we gave away the food instead? Could we help the hungry and the homeless?”

Such a simple solution to an enormous problem, yet it is so easy to simply throw the food away.

Sheila told me she thinks we might have a better world if each of us took time to identify small ways we might serve as allies and help. “It is about coming together and trying to do what’s right,” she said.

The protesters who came to Philly to promote their various causes are investors in freedom’s bank. The delegates who are here speaking up for candidates are large depositors.

Yet, with all this effort, true equality and real freedom won’t arrive until people do the small things like welcoming strangers to town – even though it is a traffic nightmare – and carrying leftover food to a family in need.

“If I cannot do great things, I can do small things in a great way,” Dr. Martin Luther King Jr. once said.

He’s right. In the City of Brotherly Love this week, small things happened. That’s a start.