EXPLAINER: Why the 14th Amendment has surfaced in midterms 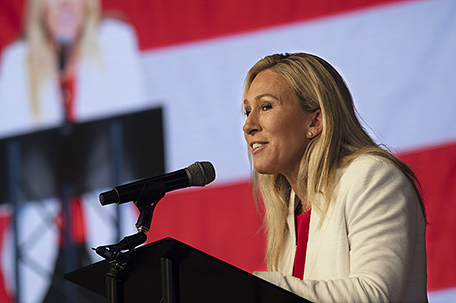 RALEIGH, N.C. — An 1868 amendment to the U.S. Constitution best known for protecting the due process rights of previously enslaved Americans has resurfaced in certain congressional races this year. Some attorneys and voters believe a rarely cited section of the 14th Amendment dealing with insurrection can disqualify a handful of U.S. House members from seeking reelection for events surrounding the Jan. 6, 2021, riot at the Capitol.

First-term Republican firebrands Madison Cawthorn of North Carolina and Marjorie Taylor Greene of Georgia are among those targeted. Both are strong supporters of former President Donald Trump who have pushed his unsubstantiated claims of voter fraud in the 2020 presidential election.

It’s a largely untested argument working its way through election agencies in at least three states, with little success so far. But court cases and appeals could address the extent to which state officials can scrutinize the minimum qualifications for candidates for federal office.

There are five sections to the amendment.  The best-known declares that no state can “deprive any person of life, liberty or property, without due process of law; nor deny to any person within its jurisdiction the equal protection of the laws.”

Section 3 of the amendment also declares that no one can serve in Congress “who, having previously taken an oath, as a member of Congress … to support the Constitution of the United States, shall have engaged in insurrection or rebellion against the same.” This section was designed to keep representatives who had fought for the Confederacy during the Civil War from returning to Congress. The amendment, however, allows Congress to pass laws that can remove such restrictions.

HOW COULD IT APPLY

Voters from congressional districts where Cawthorn and Greene are seeking reelection this fall allege in legal filings that evidence shows they helped facilitate the Jan. 6, 2021, insurrection that attempted to thwart the certification of President Joe Biden’s Electoral College victory. The voters want state officials to investigate Greene and Cawthorn and disqualify them from appearing on ballots this year, based on the amendment’s language.

Greene, according to a challenge filed last Thursday with Georgia Secretary of State Brad Raffensperger, either helped plan the riot or helped plan the demonstration held beforehand, knowing that it was “substantially likely to lead to the attack, and otherwise voluntarily aided the insurrection.”

In a video posted on social media, Greene said: “You can’t allow it to just transfer power `peacefully’ like Joe Biden wants and allow him to become our president because he did not win this election.”

Somewhat similar allegations have been lodged with the North Carolina Board of Elections by voters challenging Cawthorn. Cawthorn spoke at the “Save America Rally” before the riot, days after he was sworn into office, saying the “crowd has some fight in it.”

Greene and Cawthorn have said they did nothing unlawful such as encouraging political violence or participating in an insurrection. Cawthorn, who was the first representative subjected to the challenge in January, said activists are going after “America First patriots” who backed Trump. Greene said she was targeted because she is “effective and will not bow to the DC machine.”

Cawthorn proceeded to sue the State Board of Elections in federal court, saying that North Carolina’s candidate challenge process violated his constitutional rights and should be overturned. His lawyers also said Section 3 didn’t apply to Cawthorn because of congressional action in 1872.

Free Speech for People, a national election and campaign finance reform group, is helping represent the voters in both challenges. The group has said more challenges could be filed against other members of Congress who are seeking reelection.

Indiana’s state elections commission voted unanimously last month to reject the challenge against Banks. The commission’s chairman, a Republican, called the Capitol riot a “regrettable mark in history” but said there was no evidence that Banks was guilty of taking part in an insurrection.

As for Cawthorn, U.S. District Judge Richard Myers ruled earlier this month that the State Board of Elections could not hear the voters’ challenges on Section 3 claims.

Myers wrote that the 1872 law that removed office-holding disqualifications “from all persons whomsoever” — save for those who served in two specific legislative sessions among others — “demonstrates that the disability set forth in Section 3 can apply to no current member of Congress.”

The North Carolina Board of Elections hasn’t appealed so far. Myers previously rebuffed efforts by voters who filed challenges to participate in the litigation, but the 4th U.S. Circuit Court of Appeals told him last week to reconsider their entry. Myers’ ruling could come as soon as next week.

ULTIMATELY HAVE THEIR SAY?

Free Speech for People argues that the 1872 law applied only to former members of the Confederacy. “The right of voters to bring this challenge to Cawthorn’s eligibility must be preserved,” group legal director Ron Fein said this month.

Michael Gerhardt, a constitutional expert at the University of North Carolina law school, said he believes the 1872 law could be construed more broadly than how Myers ruled. But he also said the chances that candidate challenges will go forward under insurrection claims are “probably not good.”

“It’s really a novel theory and there’s no consensus on what the actual procedure should be, and that does pose a problem,” Gerhardt said.

He said it’s unclear, for example, whether a declaration that someone participated in an insurrection should come from a judge hearing evidence, state officials or Congress.

If the challenges are unsuccessful or delayed, voters still will get to decide whether the subjects of the challenges should return to Congress. Greene and Cawthorn have GOP primaries in May.

Cawthorn may have the more difficult road, with seven GOP opponents. He also has taken criticism for a video in which he called Ukrainian President Volodymyr Zelenskyy a “thug” even as his country resists a Russian invasion.