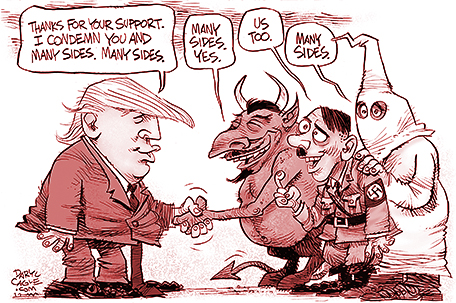 If you’re wondering why Donald Trump can’t seem to get his response to the incident in Charlottesville right, remember who brought him to the Presidential Dance.

“You’ve gotta dance with the one that brung ya…”

That line came from the late Molly Ivins, a political columnist for The Nation Magazine. She used it to describe some of the tradeoffs that politicians make to keep from ticking off their supporters, no matter how unpopular they were otherwise.

Every time that President Donald Trump has taken to the podium this week, that line has popped into my head.

That’s because I know that no matter what he wants to talk about, the reporters gathered around him are going to ask him questions about the melee in Charlottesville.

To be specific, these members of the Fourth Estate are going to want to know why a man who has no problems calling MS-13, North Korean dictator Kim Jong Un and the entire Muslim religion terrorists seems unable to wrestle his tongue from the cat hanging onto it when it comes to this bit of good ole fashioned White Nationalist violence that left one woman dead and a lot of folks injured.

However, while the way that Trump has conducted himself in the wake of what happened in Charlottesville has angered a lot of people, it really shouldn’t surprise anyone whose really been paying attention.

In fact, I think that a comment from one of Trump’s first presidential endorsers, former Ku Klux Klan Grand Dragon David Duke, says it best.

Unsurprisingly, Duke and his White Nationalist compatriots are the only ones that have really been happy with Trump’s performance regarding Charlottesville.

They’ve cheered him as he’s largely absolved the heavily armed band of goons that made up “Unite The Right” of any wrongdoing. They’ve praised Trump as he’s blamed the alt-left (which does exist and is made up mostly of “Bernie or Busters”), Black Lives Matter and the news media for the bad rap that these “very fine people” have gotten since last Saturday.

Trump has been getting all of the alt-right love thanks to his inability to call them out on anything despite the fact that this is so incredibly their fault that even Stevie Wonder could see it.

Let’s be honest here. Despite having a Jewish daughter, a Jewish son-in-law and three Jewish grandchildren, Donald Trump has worn his racist bonafides on his sleeve practically from the moment the Central Park Five was arrested. From the birther movement to his embrace of Breitbart’s Steve Bannon to naming Jefferson Beauregard Sessions his Attorney General, Trump has shown anyone who isn’t a White, Anglo-Saxon Protestant that he has no use for them.

Which is why David Duke and company danced a jig when Trump was elected. An anti-immigrant, White Power candidate winning the White House?! All is right with the world!

Thing is, since they brought him in, Trump knows they’ll take him out. And since we’re dealing with an under confident, thin-skinned man who needs to be liked, he’s going to make them happy.

So, if anyone is expecting Donald Trump to somehow have a “come to Jesus” experience regarding Charlottesville, or anything else regarding race, don’t.

The White Nationalists brought Trump to the dance. He wants to make sure he has a ride home.