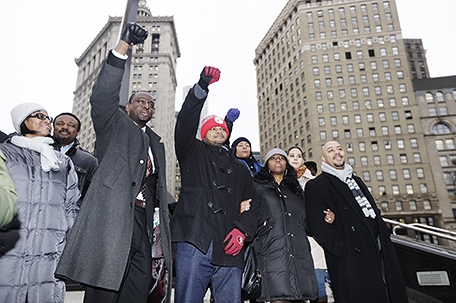 ABOVE PHOTO:  Three of the Central Park Five youths–Raymond Santana, right, Kevin Richardson, and Yusef Salaam, left, react to supporters Thursday, Jan. 17, 2013, in New York. The three men who were exonerated in the 1989 Central Park Jogger case, were in court for a hearing in a $250 million federal lawsuit they filed against the city after their sentences were vacated. Last week, the young men won their lawsuit with the City for $40 million in damages. (AP Photo/Frank Franklin II)

Real-estate tycoon Donald Trump has put his arch-race baiting prowess on glorious, malicious display again; this time following the announcement of the multi-million dollar wrongful conviction settlement pay-out to the Central Park Five. We’ll get to Trump in a minute. First let’s deal with the well-known and ironclad proven facts in the Central Park Five rape case. The five are the five African-American and Latino youths that were charged with raping and beating Trisha Meili while jogging in New York’s Central Park in 1989. They were convicted and imprisoned for more than a decade. The five were innocent. Their alleged confessions were obtained illegally, through two days of non-stop police intimidation, coercion, and lies. There was no physical evidence to connect them to the crime.

The actual rapist, Matias Reyes, confessed in 2002. DNA tests confirmed him as the assailant. Even more telling, in the years during the incarceration of the five, Reyes continued to murder and rape women including his own mother. But that didn’t end the abominable nightmare for the five innocent young men. After his confession and a judge’s vacating the convictions of the Central Park Five, then New York Police commissioner Raymond Kelly did what far too many police chiefs, city officials and prosecutors do when confronted with the naked, hard and bitter truth that they screwed up royally in rushing to judgment to convict innocent men and women. He dug his heels in and refused to admit any wrongdoing on the part of police and to apologize to the men.

Now to Trump’s trademark arch-race baiting. He sprinted in to lambast the pay-out to the men as a disgrace and politics at its lowest form. The bald implication is that the men are guilty and got a reward for their crime. There could and should be disgust and revulsion at Trump’s race baiting but no surprise. In 1989, he shelled out $85,000 to four newspapers to splash an ad demanding the death penalty for the five. The toss of the case and the overwhelming evidence that the men were innocent meant nothing to Trump. He refused every entreaty from one of the defendants, and an online petition campaign to apologize for his trying to kill five innocent men.

The ad was just a warm-up for Trump’s line of naked bigotry. His record since is well-known. He was ripped by the Justice Department for blatant racial discrimination in his apartment rentals and when cornered on his racist exclusion he blithely said that if he didn’t his and other tenants (meaning white tenants) would flee from his units and the city.

He turned the thinly disguised racist savaging of President Barack Obama into a fine art by stoking hard the phony, fraudulent, and bigoted Birther movement. Then he doubled down on that by demanding that Obama produce his supposed doctored college transcripts. Ever on the alert for an angle to race bait or to apologize for racism, he piled on the ‘poor Donald Sterling is a victim’ bandwagon by slandering Sterling’s girl-friend-mistress for leaking the tapes that offered smoking gun proof that Sterling was a racist. Trump in passing didn’t utter a peep of criticism about the over the top, outrageous litany of racist rants by Sterling.

Trump is an arch-race baiter, but he’s not dumb. He knows that his well-timed racist digs, quips and slurs will get the tongues wagging, another round of invitations on the talk show circuit, and in the case of the Central Park Five an invite to pen his race tinged scribbling’s in an op-ed column. His cynical but well-calculated race baiting ploy worked to masterful perfection with the Birther issue. Trump knew that while the issue had been thoroughly discredited and disavowed by every leading GOP presidential candidate in 2012, a significant number, if not a majority of Republicans actually believed or wanted to believe that Obama’s birth was a legitimate issue to dump back on the political table. The resulting avalanche of lawsuits and petitions filed in various state courts that contested Obama’s U.S. citizenship showed there was some mileage to be gained for Trump to continue to wave the issue around. The pay-off was that he conned enough newsrooms, talk show hosts and legions of the GOP’s inveterate Obama bashers to chat up a Trump presidential candidacy.

Trump got what he wanted. Tons of fresh media attention, a momentary seat at the GOP presidential candidate’s chat table, and starry eyed idolization from legions of ultra-conservatives and untold numbers of unreconstructed bigots. Trump now has the template that he can trot out any time an issue comes up that even has the barest whiff of race, public talk, and lots of media notoriety to it. The Central Park Five is just the latest grist in Trump’s race-baiting mill. Take this to the bank. America’s arch-race baiter will be back at it again.

Earl Ofari Hutchinson is an author and political analyst. He is a weekly co-host of the Al Sharpton Show on American Urban Radio Network. He is the author of How Obama Governed: The Year of Crisis and Challenge. He is an associate editor of New America Media. He is host of the weekly Hutchinson Report Newsmaker Hour on KTYM Radio Los Angeles streamed on ktym.com podcast on blogtalkradio.com and on thehutchinsonreportnews.com