Donald J. Trump is NOT crazy 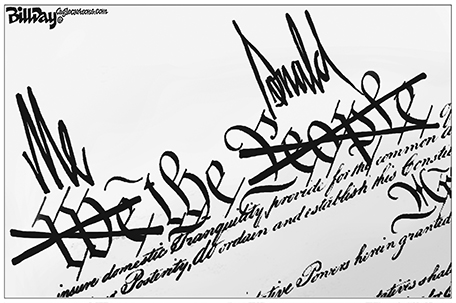 It’s time for television and radio talk show hosts, educators, editorial writers, columnists and politicians to cease describing  President Donald J. Trump as being “crazy,” “mentally sick,” “childish,” etc. A person with such afflictions is legally and otherwise not responsible for his or her words and behavior. Trump knows exactly what he is saying and what he is doing and should be totally accountable for the consequences of his shenanigans.

It’s my position that Trump’s the behavior is guided by three major forces. One is his extreme resentment and rage at the way he has been and is currently being treated by the big boys who really run this country, the so-called establishment. They treat him like an uncouth boy from Queens, who has no class. Many of them are probably guilty of the same social and financial scams that Trump indulges in, but they do them quietly, under the radar. Trump does his openly and flagrantly. To the big boys that is close to unforgiveable.

A second force that guides Trump is his never having been held accountable for his escapades. As head of a family business, he didn’t even have to deal with a board of directors. Whatever Donald said and whatever Donald did was not to be questioned by his wife, children, siblings, business associates, friends, employees, journalists or anyone else. Having to explain and justify a decision he has made — bad or good, right or wrong, legal or illegal, messes with his last nerve, and he lashes out. However, he is careful as to whom to attack in his outbursts. It’s very revealing that he reserves his most vicious and personal attacks on any woman who has the audacity to question his behavior. I have heard several male television pundits make some rather nasty remarks about Trump but he never responds to them with the unbridled fury he directs at women pundits.

Finally, I am convinced that Trump is a European supremacist who strongly believes that people of European descent should be the dominate force in world affairs. He regards Islam, not just ISIS, but Islam as the current most serious threat to continued European domination. This is evidenced by the following statement that he recently made in his visit to Poland:

“The fundamental question of our time is whether the West has the will to survive.  Do we have the confidence in our values to defend them at any cost?…Just as Poland could not be broken, I declare today for the world to hear that the West will never, ever be broken.  Our values will prevail.  Our people will thrive.  And our civilization will triumph.”

What President Trump fails to say is that the West doesn’t just want to survive. It wants to dominate.

Trump believes equally strongly that Russian President Vladimir Putin is the one who can best assist him in confronting what he considers the Islamic threat because Putin and the Russians are also European supremacists who have the same attitude toward African and Asian people as other Whites in Europe and the United States. Thus Trump and Putin have a vested interest in maintaining the status quo.

Of course, Putin wants to be top dog and may also have some dirt on Trump’s financial affairs that gives him the edge in their relationship. But I am convinced that between them is a shared belief that people who look like them have the right to be the controlling factor in global affairs.

Like I said, Trump is not crazy, childish or mentally sick. He has an agenda that has garnered him the support of a significant number of white people in the United States and in Europe.

A. Peter Bailey, whose latest book is “Witnessing Brother Malcolm X, the Master Teacher,” can be reached at [email protected]