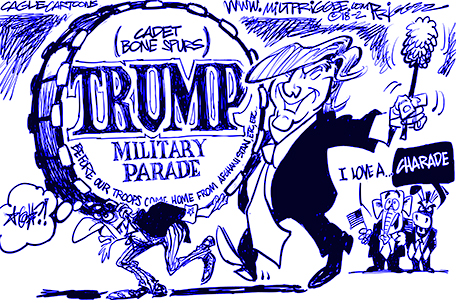 Some hoped he’d be decent, if not presidential.  Considering White House paranoia over the Russia investigation, his speech has already been pushed into the fog of forgetfulness for many, thanks to the public release of classified information from the House Intelligence Committee.  In the coming days, you must guard against manufactured news that is nothing more than a distraction to past, present and future miscreant behavior by the current administration.

As I write this, there are roughly 39 weeks remaining until the midterm  elections.  My best instincts tell me that it is far past time when we must reject the myriad of distractions that have been launched by the current administration and focus on the most important issue facing our nation — the manipulation and subversion of our electoral process by an adversarial foreign government.  Although this threat was verified by our national security agencies as valid and operational in favor of #45 during the 2016 presidential election, little has been done by #45 or the Republican- led Congress to remedy this problem.

On November 6, 2018, I doubt that many Americans will remember the $130,000 in hush money paid to Stephanie Clifford by a Trump attorney or even that her stage name is “Stormy Daniels.” Only a few will remember that Melania, allegedly angry with #45 because of the “Stormy” revelation, pulled out of her scheduled trip with #45 to the big corporate/financial ‘shindig’ in Davos, Switzerland.

I’m also sure that only those directly or indirectly affected by #45’s intemperate, “sh!?hole” comments will retain active and conscious memory of those unbalanced remarks, largely because he demonstrates his indecisiveness so frequently will millions of Americans wonder what policy decisions will spring from the warped mind of that “very stable genius?”  In November, after the accumulation of nearly two year’s worth of exaggeration, misrepresentation and outright public LIES — an average ofa little more than five per day —  I’m sure most Americans will have placed most of them into the trash bag of their memories.

I think that based on their personalized concerns, enough people will remember some of what I’ve described, or some of the other voluminous deviations from presidential normalcy committed by #45, however.

What is lacking is that we’re yet to address the issue of Russian interference in our electoral process.  Unfortunately, prolonged attention given to any of the issues I’ve mentioned does disservice to our individual and national interests.  By not taking remedial action, we’re inviting the same interference in the 2018 and subsequent elections.

Not being one to offer a problem without a solution, I am calling on National Congress of Black Women members and all others who find logic in my weekly missives to inundate their members of the House and Senate with calls/letters urging them to ignore the distractions. They must divert their full-attention from the never-ending deluge of “Trump-initiated drama” and concentrate on developing remedies for the deficiencies that have allowed the Russians, or any other adversary, to interfere with our most sacred civil process. Change will not occur without your influence.

In his last address to the Senate before his resignation, Sen. Al Franken warned, “At the end of the day, it’s going to be up to the American people…We will always have the democracy we deserve, if not the government we want.”

We ALL have the responsibility to stand against those, like #45, who would deconstruct those institutions that provide for the orderly operation of government and that have given us relatively consistent social stability.  We’ve seen how #45 and those aligned with his perverse value system try to govern.  The democracy we strive for must not and shall not allow them to succeed.

What gets lost in the Rachel Dolezal distraction