Did Eagles owner Jeffrey Lurie use an “END” around the “Rooney Rule” not to hire Duce Staley? 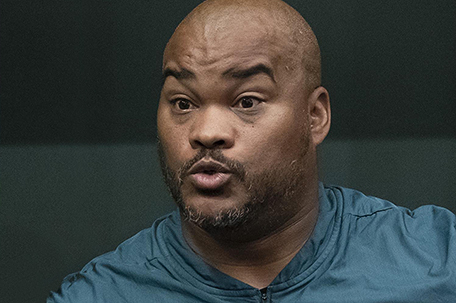 The Eagles interviewed 10 coaches from other NFL teams for the position, one of them being a beloved and popular former Eagles player and coach, Duce Staley. And while most of the players would have liked to have Staley as their head coach, Eagles’ management appears to continually show their race card and follows the NFL trend of hiring young, white inexperienced coaches that have never played a down in the NFL.

Some people don’t have dreams; they have privilege.

Staley, a 45-year-old African American assistant head coach with the Eagles spent 17 years in the Eagles organization as a player and a coach. He interviewed four times for promotional opportunities in the organization believing the front office had his back and would give him a promotion. They denied him every time.

Staley interviewed twice for a head coaching opportunity; the first time they gave the job to Chip Kelly, and after the second time they hired Doug Pedersen. He also interviewed for the offensive coordinator position twice but was passed over for Frank Reich and Mike Groh — all of which had no NFL head coaching experience. This was Duce Staley’s third time seeking a head coaching position with the Eagles.

“For all of the contributions we [Black athletes] make in football,” Watson added. “I think that ownership in the NFL has a reign and they need to do a little better with having African American represented as more assistants, head coaches, especially since about 80% of the players are Black.”

“I think Duce Staley has earned it (a head coaching job in the NFL),” Tina D. from New Jersey said. “They interviewed him at length but I think [this] was as a token [gesture],to say, ‘let me just interview him.’ But I think they should have given him a chance. You got 32 teams and just 2 black head coaches, so, you tell me what it looks like.”

The shame of what Staley went through is driven by race, perception, white privilege and the owner’s new youth movement to avert the “Rooney Rule” candidates that satisfy the leagues’ interviewing and hiring policies.

They are young white coaches who have ties to coaching trees, sons of famous coaches, and sons of league executives. None have played a single down in an NFL uniform. When the media sheds light on institutional racism and equality, it exposes  a serious problem for the predominately white owners and executives that really haven’t been addressed in the NFL.

Owners seem to have a mentality that a Black man like Staley or Bieniemy can’t be a head coach in the NFL.  Lurie fell into that category as he  hired a coach without a track record, over the loyalty of one of his coaching staff’s popular coaches.

Fans are really trying to grip their heads around the owner’s decision to hire Sirianni over Staley. The questions are swirling around the City of Brotherly Love that will last far beyond this week.

Did Jeffrey Lurie drop the ball by not hiring or promoting Staley? How much influence did Howie Roseman and Frank Reich had on Lurie’s decision to choose Sirianni? Did race, perception and the fact the league has been hiring young white coaches and avoiding the “Rooney Rule” play in his decision?  Will Duce Staley leave the Eagles or be let go by the new coach? Was this a move to satisfy Eagles quarterback Carson Wentz to repair his fragile ego and rebuild the coaching staff?

In the last three years, the NFL has hired young white coaches with an average age of 39 years old with no head coaching experience. None are former players and only one Black coach — Brian Flores — has been hired recently in 2020 by the Miami Dolphins .

But compared to their white counterparts’ career path to become NFL head coaches, African American coaches vastly differ and aren’t given the great support of confidence to lead teams in most cases from team executives and general managers, who are mostly white.

As of press time, it was reported by CBS3’s Don Bell that Staley will take a running backs coach/assistant head coach position with the Detroit Lions. He will be working with Lions 1st year running back and St. Joe’s Prep standout D’Andre Swift.