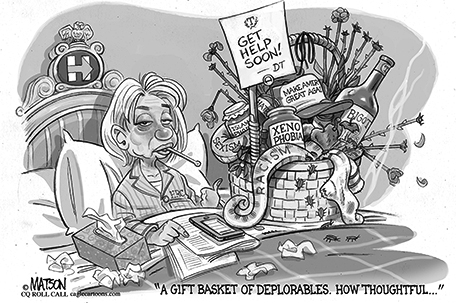 “DEPLORABLE (adj) – Causing or being a subject for censure, reproach, or disapproval; wretched; very bad. (Dictionary.com)”

If you accept television pundit opinions, Hillary Clinton did a very bad thing.  She called a portion of Donald Trump supporters “DEPLORABLES!”  More accurately, she said, “To be grossly generalistic, you could put half of Trump supporters into what I call the ‘Basket of Deplorables.’  Right?  The racists, sexists, homophobic, xenophobic, islamophobic, you name it…”  Clinton went on to add, “And unfortunately, there are people like that and he (Donald Trump) has lifted them up. He has given voice to their websites that used to only have 11,000 people, now have 11 million. He tweets and retweets offensive, hateful, mean-spirited rhetoric.”  Trump supporters also participated in their own criticism of Secretary Clinton’s statement through staged and unscripted protest.

Certainly, before the statement, she knew it would be met with disagreement and controversy—especially from those who fit the description! Unlike her critics, I find little upsetting.  I would only find it objectionable if it were based on falsehoods instead of truth.  With examination of facts, her statement can be justified.

Before moving on, her statement presents a well-needed wakeup call to all who are ambivalent about the election or who cling to “The Bern” over all others.  I, for one, am situated so that, short of nuclear holocaust or African American genocide, I could probably endure a Trump administration.  My concern is for millions of people of color who cling precariously to survival.  Beyond Trump’s threat to (abolish) the Federal minimum wage, whether he wins or loses, the social unrest generated by his campaign foreshadows racial unrest beyond Election Day.

The racist elements of Trump’s supporters/campaign are indisputable.  Klan leader and Louisiana US Senate candidate, David Duke, has endorsed his candidacy and admonished whites that voting for someone other than Trump, “is really treason to (their) heritage.”  A local Richmond, Virginia Klan member, identified only as “Imperial Wizard” stated, “The reason a lot of Klan members like Donald Trump is because a lot of what he believes in, we believe in.”

Richard Spencer, president of the white nationalist think tank, National Policy Institute, Peter Brimelow of the anti-immigrant site, VDARE and Jared Taylor, eugenicist and editor of the white supremacist site, American Renaissance held a press conference at the Willard Hotel praising Trump for providing them a platform for national exposure.  Indisputable is that Trump’s campaign HAS motivated/instigated/given “voice” and exposure to all manner of hatred and intolerance.

But I digress!  This is about The Deplorables who believe in Trump and that which motivates their thinking!

32 percent placed whites closer to the top level of “intelligences” than Blacks.

59 percent believe President Obama was not US born.

31 percent support banning Muslims from entering the US.

33 percent think practicing Islam should be made illegal

40 percent support shutting down all mosques in the US.

In his Salon article, writer Chauncey DeVega sums it up, “Trump is not an outlier…he perfectly embodies the racist attitudes and beliefs of the Republican Party in the post civil rights era…Trump’s supporters have enthusiastically embraced the Republican Party’s racism towards people of color, in general, and against black Americans, in particular.”

Restating Forrest Gump, DEPLORABLE IS WHAT DEPLORABLES DO!