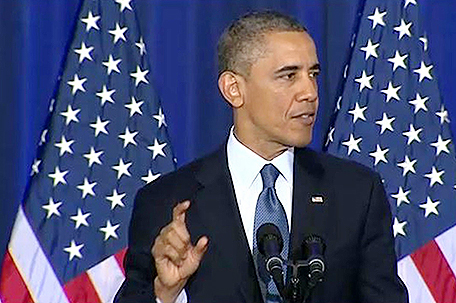 Here are a few election-time questions to think over: Why in the world do Democrats think they can bash President Barack Obama and his policies and still win Black votes?  Why should Black voters be motivated to turn out after months of watching Democrats bash the president?  What exactly is the strategy for Democrats to get Black voters out?

Many Democrats running this cycle, even in states and districts with large Black voting populations – including North Carolina, Georgia and Louisiana – have made the deduction that annoying and ignoring Black voters is less important than winning White ones. The White swing voter is supposedly a more vital target than the Black voter who is a 95 percent sure bet to vote for a Democrat. It’s a fascinating strategy featuring Democrats running in fear of their own record while ignoring what’s happened over the last six years.

Thanks to the president, Osama Bin Laden is dead. The unemployment rate is now 5.9 percent.  Even the Black unemployment rate dropped from 16.5 percent in 2011 to its current 11.4 percent. More than 8 million Americans have signed up for health care. The Republican contribution?  Gridlock, more than 50 votes on Obamacare repeals and shutting down the government.  The approval numbers for Republicans in Congress is lower than the president’s yet Democrats shun his policies?

Yes, President Obama has a 40 percent approval rating. But Congress’ approval sits at 14 percent — the lowest since 1974.  You wonder what the numbers would be if Democrats actually stopped apologizing for their record and instead put the GOP on defensive. Who among the GOP leadership in Washington can claim legislative achievement in a party whose number one ideology is gridlock?  This is the least productive Congress in history.

If Democrats lose the Senate, it will be because of self-inflicted wounds.

When asked what the Democrats’ strategy was for getting out the Black vote, Democratic Congressional Campaign Committee Chairman Steve Israel referenced a voter turnout strategy focused on getting voters out based on “what’s at stake for the African American community.”

Apparently Democrats have forgotten – or don’t care – that Black voters are the party’s most loyal voting bloc. In 2012, Black voters turned out at a higher percentage than Whites.  Black women are the highest turnout group among all women. But this enthusiasm will likely lessen, not just because the first Black president will no longer be on the ballot, but because Democrats fail to support the policies enacted while he was there.

In a midterm election it will take more than a pre-election day Sunday swing-by to get Black voters and others out. Yet many Democrats make no specific references or pledges on specific policy that might motivate that turnout.  Few Democrats dare discuss racial profiling, mandatory minimums or justice reform or — God forbid — health care reform.

Alison Lundergan Grimes, a Democrat running for Senate in Kentucky against gridlock king, Sen. Mitch McConnell, won’t even admit she voted for President Obama. Instead of running a campaign that puts McConnell on the defensive by bringing up how little he’s done for Kentucky, Grimes is frantically telling voters how much she disagrees with President Obama.

Likewise, in Arkansas, Sen. Mark Pryor’s race has become about Pryor dodging questions on whether he agrees with President Obama — exactly what the GOP wants. In Colorado, Democrat Mark Udall was asked “which of the president’s proposed policies are you prepared to vote against” by a moderator. Even some journalists have bought in to the GOP’s narrative.

If a voter’s big concern is whether a candidate agreed with the president in their party, you can pretty much bet that’s a Republican voter. For some reason, Democrats are trying to win the voter who hates the president and get out the base simultaneously. Good luck with that one.

Even after 8 million Americans have signed up, Democrats run from the idea of bringing up the Affordable Care Act as a success.  The number of Americans without health care has dropped to the lowest rate since the 1990s – from 18 percent to 13 percent. The uninsured rate for African-Americans is now 15.1 percent, from 18.9 percent.  But Democrats fail to mention how dead wrong Republicans were in 2010 and beyond after health care reform was signed into law.  Instead they continue to run from their own shadow.

It seems Democrats are on the brink of getting the result they deserve.  Does running away from your own record work? The Democratic party is likely to find out the answer to that question the hard way on November 4.

Lauren Victoria Burke is freelance writer and creator of the blog Crewof42.com, which covers African American members of Congress. She Burke appears regularly on “NewsOneNow with Roland Martin” and on WHUR FM, and 900 AM WURD. She worked previously at USA Today and ABC News. She can be reached through her website, laurenvictoriaburke.com, or Twitter @Crewof42 or by e-mail at [email protected]