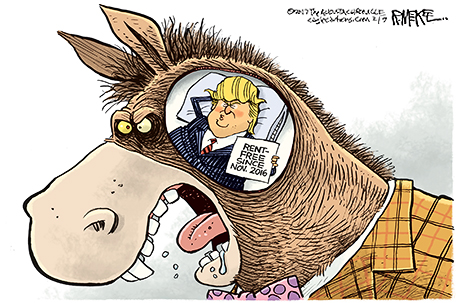 The Democratic National Committee was by any standard a wreck and a ruin during the 2016 presidential campaign. It got pounded for misstep after misstep, which included: poor, and disconnected leadership, leaked emails, gross favoritism, petty infighting, blatant manipulation of the primaries, and gross cluelessness about the Trump threat. How much of this is past history in the Trump era is the big question that will in part be answered when the Democrats pick a new DNC head in late February.

The jockeying for the top spot has been ferocious ,with one time front runner Minnesota congressman Keith Ellison the early betting favorite. He has Bernie Sanders, Elizabeth Warren, and every progressive behind him. He has their loud warnings that if the Democrats continue to be the centrist, compromising, top heavy corporate backed and run party, it can kiss millions of progressive voter’s good-bye again. It will have about as much energy as a burned-out battery in trying to rev up voters for the crucial 2018 mid-terms. The counter is that the Democrats flopped precisely because Trump bagged a big chunk of the angry, alienated, and frustrated blue collar and rural Whites. The Democrats can get most or many of them back by crafting a message to them about runaway jobs and economic security. This supposedly requires a Democrat in the mold of Obama not Sanders to do it. There are two truths behind the clashing views of what a DNC chair should be and where he or she should take the party.

The Democratic National Committee is tasked with the chore of spotting and recruiting able talent to run as Democrats for office, then helping to raise money for the Democratic candidates and incumbents, putting volunteer and paid professional boots on the ground for their campaigns, and mounting an all-out get out the vote blitz in the weeks leading up to the election to put Democrats locally and nationally over the top.

This takes a well-oiled, well-coordinated ground game to put as many Democrats as possible in Congress, and to keep the ones who are there there.

That’s only the start. It also takes someone who can inspire, cajole, and engage legions of Hispanics, Blacks, and youth voters who were MIA from the polls in 2016. An even greater number of them have been chronic no-shows in mid-term elections. Ellison is the “progressive’s progressive” who says that he’s the man who can do what Sanders did in the Democratic primaries and fire-up a big chunk of these potential voters.

The other bitter truth is that Trump won many disconnected and frustrated White voters because he welded their latent racist, anti-immigrant, anti-woman, pseudo- patriotic sentiment to their loathing of, and alienation from, the GOP and the Democrat’s beltway, out of touch with Main Street crowd. That’s a tough hurdle for a progressive or a centrist Democrat to overcome. The better option for the DNC remains padding the number of Hispanics, Blacks, women, and youth in the five or six states that elect presidents.

The gaping disparity between the GOP and Democrats in voter turnout in the primaries was not in the tens of thousands but millions. The GOP energized its base like it hadn’t been done in years, as well as firing up lots of young persons who in years’ past would likely not have been caught dead voting for a GOP presidential candidate. At the same time, the Democratic turnout has been to be charitable tepid and this in the face of the spirited, impassioned face-off between Clinton and Sanders whose populist, hit Wall Street hard message, touched a huge nerve among legions of young and not so young voters.

The universal consensus is that future elections will come down to which party can get the greatest number of voters to the polls to vote for their candidate in every race from the White House to congressional and statewide offices. It’s a numbers game pure and simple. In the 2014 midterms and in the states Trump needed to win in 2016, the GOP showed that it could get those numbers out. The Democrats can do the same. After all, despite the GOP’s well-tuned ground game and Trump’s phony man-of-the-people, anti-Washington establishment hucksterism, the Democrats still had a voter edge of several million over the GOP. This is huge for whoever winds up in the top spot at the DNC.

The DNC chair will also have the anger of millions at Trump’s outrages to build on. However, if the DNC is just more warmed- over soup of the past, then the numbers won’t mean much. The question is can and will the Democrats be able to make their numbers bulge over the GOP and the rage at Trump mean something? That’s the big question and challenge for the Democratic National Committee and its next chair.

Earl Ofari Hutchinson is an author and political analyst. He is the author of In Scalia’s Shadow: The Trump Supreme Court (Amazon Kindle). He is an associate editor of New America Media. He is a weekly co-host of the Al Sharpton Show on Radio One. He is the host of the weekly Hutchinson Report on KPFK 90.7 FM Los Angeles and the Pacifica Network.