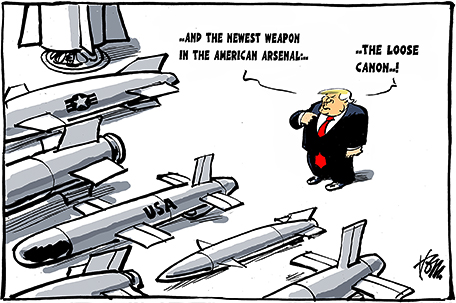 ABOVE CARTOON:  Tom Janssen, The Netherlands

Fifty-nine cruise missiles. When Donald Trump ordered the attack on Syria, he made an impetuous decision, turning his previous commitment to stay out of the Syrian civil war and focus on ISIS on its head. He ordered the attack on a sovereign nation without seeking sanction from the United Nations or the U.S. Congress. For this, he received lavish praise from the media and bipartisan congressional support. He’ll undoubtedly enjoy a boost in the polls.

Military force is called “strong power.” Ordering an attack turns the president into the commander in chief and gives him an image of decisiveness and power. Yet the unleashing of cruise missiles against Syria is both dangerous and deceptive.

If Trump has decided to commit to regime change in Syria, it is dangerous. Syrian dictator Bashar al-Assad is backed by both Russia and Iran, and Assad’s forces are the leading opposition to ISIS, the terrorist gang that Trump is already committed to destroying.

If the cruise missiles are simply a punitive gesture, a one-off strike to punish Assad for allegedly using chemical weapons in the Syrian civil war, it is deceptive. The missile attack will have done little but raise false hopes among Assad’s opponents. One day later, Assad’s air force launched attacks from the airbase that was hit, against the same town that was allegedly bombed with chemical weapons.

Last year, the U.S. dropped 26,171 bombs — in Afghanistan, Syria, Iraq, Libya, Yemen, Somalia and Pakistan. The only thing that the new bombing in Syria does is to get Trump and the U.S. deeper into the Syrian civil war, even as Trump appears to be escalating U.S. activity in Afghanistan, Yemen and Iraq. During the campaign, Trump expressed his scorn for regime change and denounced the foreign policy elite for engaging in wars without ever “winning.” Now, he appears to be doubling down on those same wars without any plan for victory.

Bombs — strong power — are in fact simply destructive. They build nothing. In Syria, the human catastrophe from the civil war is unspeakable. Roughly half of the 22 million residents of Syria have been driven from their homes, including an estimated 6 million internally displaced and some 5 million refugees whose flight has created an ugly right-wing reaction across Europe. Half a million have died. Another 2 million have been wounded. More bombs aren’t a sign of strength; they are an expression of violent futility.

The horrible pictures of babies dying from poisonous gas might have sparked a different response. The U.S. could have gone to the U.N. with proof that the Assad regime had sponsored the attack, calling for a cooperative international effort to rid Syria of those weapons. Trump might have dispatched his emissary to Russia to demand that it join in fulfilling the promise it made to former President Obama to rid Syria of chemical weapons. The outside powers feeding the violence in Syria — the U.S., Saudi Arabia, Qatar, Turkey, Iran and Russia — might have convened in an effort to bring the violence to a halt, or at least to agree to stop fueling it with weapons and forces.

The children’s deaths might have served to generate a global demand for an end to the violence. Instead, it triggered a quick recourse to bombs to “send a message,” ensuring only that the violence will continue, that more Syrian children will be killed, and that the U.S. will find itself enmeshed even more deeply in yet another war.

The U.S. has been at war in the Middle East continually since 2001. In the name of creating democracy and security, we have created chaos and spread violence. In the name of fighting terrorism, we have generated ever more terrorists and helped create failed states where they can spawn. What will it take for this country to learn the limits of military force, the weakness of “strong power”?

Dr. Martin Luther King got it right when he taught us: “The ultimate weakness of violence is that it is a descending spiral, begetting the very thing it seeks to destroy. Instead of diminishing evil, it multiplies it. Through violence you may murder the liar, but you cannot murder the lie, nor establish the truth. Through violence you may murder the hater, but you do not murder hate. In fact, violence merely increases hate. So it goes. Returning violence for violence multiplies violence, adding deeper darkness to a night already devoid of stars. Darkness cannot drive out darkness: only light can do that.”