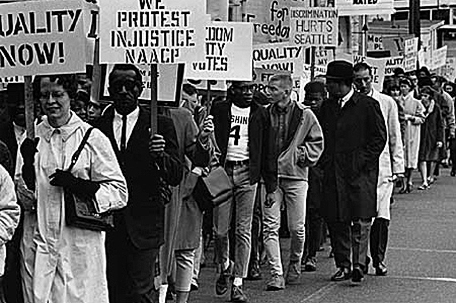 special to NewBlackMan (in Exile)

As a young executive director of one of the nation’s most influential civil rights organizations, I am beyond amazed at the level of pomp and circumstance that shrouds what should be the true emancipatory work of organizations positioned to make substantive change and serve as representative voices for the oppressed and silenced across the country.

I am troubled by the degree to which ego, bravado, posturing and back-scratching both characterizes and so deeply infects the ethos of institutions with such wealthy legacies of freedom fighting. Exploiting the most dutiful of PR strategies and engaging empty partnerships for the sake of corporate notoriety, the civil rights community is failing.

From memorial marches to commemorative demonstrations, to loosely paraphrase a Bible verse, “there is an appearance, but the power thereof is denied.” We are in trouble. But we don’t have to be.

Dear civil rights leaders, This is not about you!

While you continue to rub elbows with power brokers and evade moral imperatives, there is a generation dying and being killed. Their voices are being stymied and their cries muted by the egregiously egotistical narcissistic power hungry position jockeying of baby boomers whose net worth rests on appeasement politicking. Am I angry? Yes! Enough is enough! We don’t care about your deals. We don’t care about who you know or who you’ve met. We don’t care about pictures, plaques or presentations – all aimed at placating the interest of those who fund your devolution.  This is not about you!

But, maybe this is about you! Maybe it’s all about your acquiescence to the delusion of black arrival. Coretta Scott-King rightly noted, “struggle is a never-ending process. Freedom is never really won, you earn it and win it in every generation.” But when an obstinate generation of self-aggrandizers touts, as bearers of history and the voices of the community, a delusional narrative of freedom and victory, we all lose. We are not free. We are freely working on freedom. Struggle is never-ending. Freedom is never really won.

We are fighting daily to address the regressive legislation that will continue to disenfranchise. We are daily combating stereotypes and micro-aggressions. We are daily fighting mis-education, under-educated and the systematic denial of our true history. So is this about you? No! But, then again, yes, it is! It’s about your negligence and lack of priority. “Young people” have become your cat’s-paw and trope for “caring”.  Our lives have literally begun to end because you, “civil rights leaders”, are “silent about things that matter”.

Now, this does not apply to all of you, just most of you. You hold “young people” at abeyance for the sake of occupying a space that provides you the privilege of special invites and the allocation of special dollars which in turn muzzle your bite for equity, fairness and justice.

In 1968, on the balcony of the Lorraine Motel in Memphis, Tennessee, it is said that the drum major for justice was lost and the civil rights movement ended. There was a time when I refuted this claim, but I am daily becoming a believer. Have I lost hope, no. But my will to press forward in “the freedom struggle” is often tested as I sit through the pageantry of disingenuous acclamations tossed around and about by folk who are not interested in coalescing around the issues that matter– redlining, gerrymandering, poverty, mandatory minimums, racism, sexism, classism, militarism and a culture of violence to name a few.

The black protest tradition, as rooted in the black prophetic tradition and its call to consciousness, was birthed out of the many subversive acts of the enslaved hopeful… in many ways, this signified to the collective “movement” to move toward a unified effort within the context of more suitable conditions. Consider this a “first step” act of subversion which has as its aim: accountability.

Damien Conners is the Executive Director of Excel Bridgeport, an organization working to ensure a world class education for all Bridgeport children.  Previously, he served as the national executive director and COO of the Southern Christian Leadership Conference, Inc. (SCLC)—an organization led and co-founded by Dr. Martin Luther King, Jr.  Among other accomplishments during his tenure at SCLC beginning in 2010, he is honored to have founded the SCLC Poverty Institute, an organization founded to address systemic inequity. Follow him on Twitter: @DameAlexander