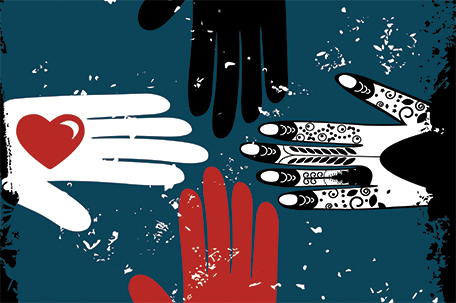 Americans are gathering at a risky intersection – one in which cultural collisions are leading to a mounting death toll, and distrust, anger and despair.

We are all grieving as we attempt to make sense of the police shootings of two African American men – Philando Castile in Minnesota and Alton Sterling in Louisiana. – and the gunning down in Dallas of five white police officers by an African American.

To avoid an uncertain future, we must reflect on our own biases and find solutions that will stop the flow of blood onto American streets.

As citizens, we are divided by an information gap: Our eyes are focused in different directions, on different issues, so we don’t always see what our neighbor sees.

To the citizens standing to our right, violence in the African American community is the underlying factor in the recent shootings by police. They suggest officers are simply good people trapped in bad situations and police, alone, can’t be expected to solve all of society’s problems. Some suggest if African Americans were more respectful, police shootings would not occur.

For people on the left, implicit bias and an inequitable criminal justice system are drivers of recent tragedies.  They advocate for better police training, greater diversity on the police forces, and community-centric police tactics.  They suggest that if the primary role of the police was to protect and serve the public, more citizens would step up to help. With police bullets flying in their neighborhoods, they sometimes feel like collateral damage.

Each group is trying to advocate for its concerns, while ridiculing and shaming the other side for exposing its dirty laundry.

My dear neighbors on the left and on the right, we are overlooking a critical point: We need each other to find the answer. We are more effective and insightful, whenever we stand and talk together. You see, every human being has blind spots. Only when we stand side-by-side can we truly see the unknown unknowns.

The New Tri-State Defender reported this week on a heartening event in Memphis. A group of local teenagers, who organized a march protesting the recent police shootings, marched across the city, shutting down the I-40 bridge. Somewhere, a dialog began. Interim Memphis Police Chief Michael Rallings and the protesters started talking. The next thing you know, the chief has locked arms with protesters, and everyone agreed to meet later for additional talks.

Now, this ‘walk, then talk’ strategy is just what we need. .Having had the privilege of facilitating a few dialogs on police- community relations; I wish to offer a sensible strategy for moving forward.

Stop the yelling, and start the listening. I propose a listening exercise to kick off the conversation. Each side gets 15 minutes to speak, while the other group listens and takes notes. After the first group finishes, people in the room are free to ask questions to seek clarity. No one is allowed to challenge or debate any statements that have been made.

Then the second group presents its perspectives, and everyone listens. Same routine. At the conclusion of this dialog, every participant discusses what he or she learned (not what he or she thinks.)

Then, schedule a second meeting, a third and a fourth. When you reach the point you are as familiar with the other side’s issues as you are with your own, that’s the moment to try to imagine bold solutions. A police chief might say: I am proposing cultural competency and conflict-resolution training and culturally appropriate hiring procedures. A protester might say: I am going to help people in my community understand why officers feel disrespected and let the officers know I stand behind them.

Benjamin Franklin, in his final speech to the Constitutional Convention said,”… when you assemble a number of men to have the advantage of their joint wisdom, you inevitably assemble with those men, all their prejudices, their passions, their errors of opinion, their local interests, and their selfish views.”

His words apply aptly to our situation today.

It is said by some historians that Franklin was approached as he left the convention, and asked what type of government was formed. He replied, “A republic, if you can keep it.”

Let it not be said that we were the generation that let the republic fade and slip away.

The Cultural Coach: Talk to your doctor about racism, please!