The Cultural Coach: Something Noble This Way Comes 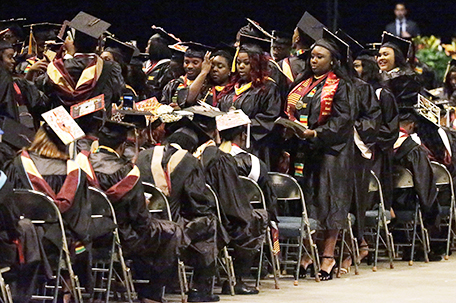 ABOVE PHOTO: In this Wednesday, May 10, 2017, file photo, a group of students stand and turn their backs during a commencement exercise speech by Secretary of Education Betsy DeVos at Bethune-Cookman University in Daytona Beach, Fla. Since the beginning of 2016, more than two dozen campus speeches have been derailed amid controversy, according to the Foundation For Individual Rights In Education, a group that monitors free speech on campuses. (AP Photo/John Raoux, File)

Something noble is happening in the world today. Student protesters at a number of colleges and universities are beginning to demand solutions to America’s cultural learning gap.

This is the gap between the information students are given and the knowledge they need to thrive in the real world.

I graduated from the University of Missouri-Columbia’s Journalism School, which happens to be the first journalism school in the country, and one of its finest.

Professors taught many valuable lessons including the major elements of a news story, how to ask the right questions and how to write in a way that captivates readers and provokes deep thought.

My comprehensive education, however, left out some important chapters, I would later discover. It never taught me — an African American journalist — how to advocate for multicultural stories in the newsroom, how to talk to people with blindspots or explain systemic discrimination.

I was never prepared to respond to prejudice. For instance, the Texas hotel clerk who refused to give me a room while I was in assignment as a national correspondent for “The Philadelphia Inquirer”.

The White clerk kept telling me that she had no rooms available, even though the hotel parking lot was empty, and I had in my hand a reservation number I had been given when I called to reserve the room the night before.

Immediately, I suspected my skin color might be the issue.

So what does a journalist do? Ask questions.

“I work for a very large newspaper back east called the Philadelphia Inquirer. I’m afraid that if you don’t give me a room, my editors will think you are denying me a room because I am Black,” I told the clerk, smiling sweetly. “Next they are going to put a White reporter on a plane to Texas, and you and I will end up on the front page of Sunday’s newspaper. I don’t want that, do you?”

Turns out my little speech helped the clerk to see we had common ground after all. She let me register and gave me a key to a room.

There would be other pop-up challenges regarding race and culture throughout my journalism career: the proprietary school owner who kept using the word “nigger” during my interview with him, and the White teacher who described his African- American students as animals, along with other painful incidents.

The skills I used to address these situations came not from the classroom or a textbook but, ironically, from the time I spent at Mizzou protesting the campus’s racially – charged environment. I actually borrowed some of those techniques to help me along in my career.

This brings us to the recent breakthrough on college campuses today. A growing chorus of multiracial student leaders has formulated a new message. They went beyond those who are fighting racism, to demands that their institutions provide compulsory cultural competency training, the same sort of training that might have been useful during my career.

Cultural competence is the knowledge America needs to reduce the learning gap. It many cases, it is the difference between what college graduates are taught and what they need to know to make their workplaces engines of innovation where diversity works for all employees.

There are exceptions, of course, like healthcare professions where cultural competence already is embedded into the core of the curricula.

And let’s not forget the U.S. Army, probably the nation’s biggest supporter of the cultural competence movement, as evidenced by a 2015 white paper on the topic. “Cross-cultural competence is critical to the Army’s success for a complex range of missions abroad,” it concluded.

What’s interesting is that student leaders are beginning to agree with the U. S. Army generals. At Emerson College, located in the heart of Boston, student activists began demanding cultural competency training back in 2015, a campaign that ultimately brought faculty into the fold and started a review of the curriculum.

Free speech is important. I support it fully, but the companion dialog on cultural competence is just as important. In today’s world, college graduates need to know how to work effectively with other cultural groups, because ultimately collaboration and teamwork powers excellence.

America needs to figure out how to close the learning gaps so the next generation of business leaders has the confidence, the ingenuity and the perseverance to do what their predecessors  failed to do: create workplaces that enable all employees to fully contribute.

Let’s hear it for the students who seek to close the opportunity gap by educating leaders in a way that prepares them to create the world we want to live and work in.