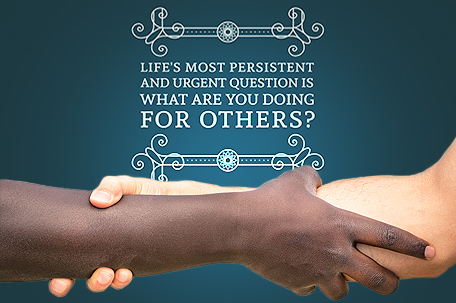 Let’s imagine that we are walking down the street and a man with a booming voice begins harassing an openly gay couple.

What should we do? Should we pretend like our ears are clogged and we can’t hear? Tell the man who is yelling to use his indoor voice because his pitch is unbearable? Join the harasser, or chase the harasser and help police make an arrest?

Too many compassionate people choose to remain silent during sudden encounters with racism, sexism, religious discrimination or homophobia. That little voice inside of us tries to persuade us that the target must have done something wrong, or else this would not be happening to him or her. We don’t run for the police, we run from the problem.

But every now and then, a hero emerges to remind us that America on its brightest days stands for equality, compassion and freedom. These heroes are the cultural bridge builders who clearly see that if we remain silent as the civil liberties of others are under attack, we put our own freedoms at risk.

This cultural brigade has some surprising members, including former basketball star Shaquille O’Neal. In case you missed this, in 2005 Shaq saw a man throwing a bottle and yelling anti-gay slurs at a couple passing by him. He trailed the man and helped a nearby Miami police officer arrest him for a hate crime.

Imagine what Shaq’s inner voice might have whispered as he was in hot pursuit. “Are you crazy? Think about your $100 million contract. What would happen if you get shot? You have to think about yourself.”

This decision was a no-brainer for 7-foot-1 Shaq who, now retired, was sworn in last year as a reserve police officer in Doral, Fla., where he assists with community outreach.

People often ask me why I tend to confront the haters that I encounter rather than ignore them. Well, it stems from my belief that collective silence provides bullies with greater power and control. The man making anti-gay remarks most likely thought that “I am going to go out and have some fun today, and nobody is going to stop me.”

If it had occurred to him that Shaq might be passing by and might turn him over to the police, he might have planned his day differently. You see, as the level of discomfort rises for bullies, the size of the thrill they walk away with declines.

A few years ago, I was walking past a Roman Catholic Church when I came across a man holding up condoms and yelling to the Catholics who were heading for Mass. “Get your free condoms. Have safe sex with your priests.”

I approached the young man to ask a question: “What is it that you hope to accomplish by doing this?” He had prepared for Catholic tantrums, anger and indignation, but was unprepared for a dialogue. He offered me a condom, which I refused.

A parishioner saw what was happening and walked across the street to help. He stood beside me and asked the protester a simple question: “Do you think people should be forgiven for their sins?”

I wish you had been there to see the look of shock and surprise on the protester’s face – without a cross word or a single punch thrown.