Commentary: The superpowers of legacy and coalition building 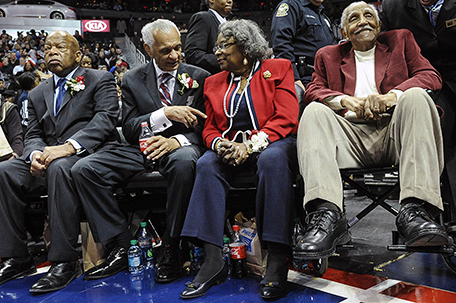 ABOVE PHOTO: The Rev. C.T. Vivian, second from left, talks to Juanita Abernathy, as Rep. John Lewis, left, D-Ga., and the Rev. Joseph Lowery, right, watch the second half of an NBA basketball game between the Atlanta Hawks and theToronto Raptors, Friday, Feb. 20, 2015, in Atlanta. The Hawks paid tribute to civil rights pioneers as part of Black History Month. (AP Photo/John Amis)

When it comes to movements that have dramatically shifted the trajectory of history, few compare with the post-war civil rights struggle in the United States.

After many in the generation of African Americans that survived the Great Depression went on to fight against fascism in Europe and Asia in a segregated military for a country where they were not full citizens, they began to question it.

Some of their children — many born during that war or shortly after — looked at the experience of their elders and also began to question this paradox.

There had always been those who advocated for civil rights, justice and equality, however, after 14 year old Emmitt Till was lynched for whistling at a white woman, and his mother took the bold step in allowing his mutilated body to be photographed and viewed by thousands, there was a seismic shift.

The stakes were high, but there were several agents of change in play; elders who had fought this battle for justice and equality in the trenches for many years, and young, emerging leaders, as well as children, teens and young adults.

It was not easy, but somehow they were able to form coalitions to work towards that end. The elders were unafraid to impart wisdom and advice, and young people were unafraid to question them, especially when it came down to tactics and goals. There were rifts, factions, arguments.

Still, they were able form alliances, compromise, agree to disagree and respect one another for the greater good.

Whether it was elders like A. Philip Randolph who had been advocating for African Americans for years prior, Ella Baker who actively mentored the youth, C.T. Vivian as a young professional confronting racist officials and advocating for voting rights or Rep. John Lewis as a  representative from the Student Nonviolent Coordinating Committee challenging unjust systems and practices, all played a part in securing the rights and freedoms we enjoy today.

Fast forward to 2020, when not even two generations later, many of the reforms have been rolled back, and violence, racism and discrimination are flourishing amid pathologically inept leadership.

Battle lines have been redrawn along the same fault lines left from decades earlier. There has been a reemergence of the “law and order” jackboot enforcement tactics used to terrorize and gain political power decades ago, complete with a full array of extra constitutional practices and thuggery.

In light of all of this, I will always maintain that our greatest failings as African Americans has been in neglecting to teach our children and grandchildren the history of this struggle, and to emphasize our inherent superpowers of legacy and coalition building.

I think that this failure has contributed in part to the uneven reporting on lives and legacies of the two giants of the Civil Rights Movement who left us last week — C.T. Vivian and Rep. John Lewis.

While some reports and social media tributes have been poignant, heartfelt and thoughtful, other responses have ranged from patronizing sentimentality to crass politicization, and have fallen short.

There seems to be a lack of imagination or curiosity to explore anything beyond what can easily be Googled, in the choice of guests, in the questions asked. Some of those who knew both men personally and could provide much needed backstory and nuance have been interviewed, but again, not enough of them in my opinion.

They were ordinary men who did extraordinary things, but always viewed themselves as part of something greater.

The two late activists started out together as theology students at the American Baptist College in Nashville, Tennessee. Although Vivian was older than Lewis, and had been part of a civil rights action in the 1940s, both were still young and driven by a shared mission.

Like many who were part of that movement, both men suffered physical blows and pyrrhic victories along the way, and at times it appeared that all their striving was in vain. Coalitions crumbled, people moved on, and individual missions and objectives were redefined numerous times. But they always pushed forward.

Throughout the remainder of their post- movement lives, Vivian and Lewis emphasized the importance of mentoring at all ages, and were devoted to nonviolent social change and justice until the very end. No matter where life led them career or mission wise, that core dedication never wavered.

If there is one thing that people like Vivian and Lewis knew well was that movements are messy. Movements are at best powerful engines that drive change, in spite of themselves. At the worst, they are full of fear, pain, anger and conflict — in other words, made up of human beings with feet of clay.

These two powerful leaders also knew that in movements, there is value in both preserving legacy and investing in the future.

They, like those who went before them, are part of the ages now, but their example — and that of thousands more — can still serve us now and in the years to come.

It’s time to get back to basics.

For example, millennials can make sure that they are available as mentors and teachers to those belonging to Gen Z as they all strive together to define what movements of change look like for them.

Baby boomers and Gen Xers can address the shortfalls from their past and make sure that everyone — including their peers — studies history and shares that knowledge across the board.

Surviving Civil Rights Movement elders are powerful witnesses and sounding boards when it comes to strategy and lessons learned, not unlike those who mentored them in the 50s and 60s, and can provide wisdom and sound advice.

Each role is necessary, each idea is worth considering and each demographic has value to add to the struggle.

The superpowers of legacy and coalition building are at our disposal. Let’s make sure we use them.

August 28 – A Story of American Struggle