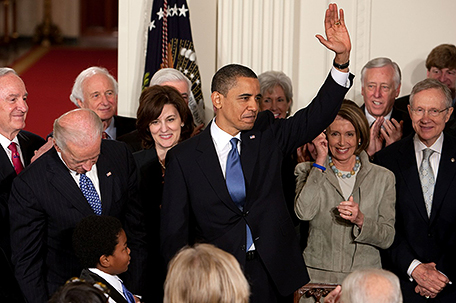 Racism has historically had a significant, negative impact on the health care of Blacks and other people of color in the United States. The Affordable Care Act (ACA) is truly the first time that African-Americans have, collectively, had significant access to health care. It is noteworthy that America’s first African-American president is chiefly responsible for this access.

Improved access to care, Medicaid expansion, prevention medicine, and lifting of barriers for pre-existing conditions are all aspects of the ACA that have been of great benefit to Blacks. But there is a thick air of uncertainty on the horizon.

In a few weeks, Donald John Trump will become the 45th president of the United States.

It is unclear how quickly, or when, Trump’s vow to repeal and replace Obamacare will play out. But make no mistake, just like the adage, “when White folks catch a cold, Black folks get pneumonia!”, a repeal of the ACA would disproportionately hurt Blacks.

Republicans in Congress have put out their plans: to repeal most of the ACA without replacing it; doubling the number of uninsured people – from roughly 29 million to 59 million – and leave the nation with an even higher uninsured rate than before the ACA.

Let me point out a few ways that Blacks have, specifically, benefitted from the ACA, what many now call “Obamacare”. Given the low incomes of uninsured Blacks, nearly all (94 percent) are in the income range to qualify for the Medicaid expansion or premium tax credits. Nearly two thirds (62 percent) of uninsured Blacks have incomes at or below the Medicaid expansion limit, while an additional 31 percent are income-eligible for tax subsidies to help cover the cost of buying health insurance through the exchange marketplaces. Under the law, insurance companies are banned from denying coverage because of a pre-existing condition, such as cancer and having been pregnant.

Importantly, for people living with HIV there also new protections in the law that make access to health coverage more equitable including the expansion of Medicaid and in the private market, prohibition on rate setting tied to health status, elimination of preexisting condition exclusions, and an end to lifetime and annual caps. The passage of the Affordable Care Act (ACA) in March 2010 provided new opportunities for expanding health care access, prevention, and treatment services for millions of people in the U.S., including many people with, or at risk for, HIV.

Safety net hospitals play a critical role in the nation’s health care system by serving low-income, uninsured and medically and socially vulnerable patients regardless of their ability to pay. Also, in agreeing to lower payments, hospitals in the 31 states that expanded Medicaid under the law, have made up that revenue in part through the Medicaid expansion.

These places are critical to the health of Black communities, and in the poorest neighborhoods. They have been among the loudest voices against repeal of the health law, as they could lose billions if the 20 million people lose the insurance they gained under the law. This could bring about widespread layoffs, cuts in outpatient care and services for the mentally ill, and even hospital closings.

Under the ACA, these hospitals have received subsidies (or credits) to provide care based on a patients’ income levels. Should this change, community hospitals may have more difficulty weathering the storm of an increase in the number of uninsured.

Admittedly, there are some real problems with the ACA as we have come to know it; not the least being steady increases in premiums (midrange plans increased 22 percent nationally in 2016, with the average premium set to rise 25 percent in 2017); nearly 70 percent of all ACA plan provider networks are narrower than promised; and the high-deductibles and co-pays. Perhaps the most universal complaint is the “individual mandate”, that requires everyone in the United States to have insurance, or face a financial penalty.

The plans they have proposed so far would leave millions of people without insurance and make it harder for sicker, older Americans to access coverage. No version of a Republican plan would keep the Medicaid expansion as Obamacare envisions it.

Donald Trump’s presidency absolutely puts the future of the Affordable Care Act (ACA) in jeopardy. A full repeal is unlikely, but major changes through the budget reconciliation process (which cannot be filibustered) are nearly certain.

But let me be clear; changes are needed in the ACA, but the idea of dismantling it remains a troubling prospect for Blacks.

Glenn Ellis, is a Health Advocacy Communications Specialist. He is the author of Which Doctor? and Information is the Best Medicine. A health columnist and radio commentator who lectures, nationally and internationally on health-related topics, Ellis is an active media contributor on Health Equity and Medical Ethics.

Listen to Glenn, every Saturday at 9:00am (EST) on www.900amwurd.com, and Sundays at 8:30am (EST) on www.wdasfm.com. For more good health information, visit: www.glennellis.com

How the Affordable Care Act may affect your tax refund

What the Affordable Care Act means to you