Coming to grips with made in America terrorism in Orlando massacre 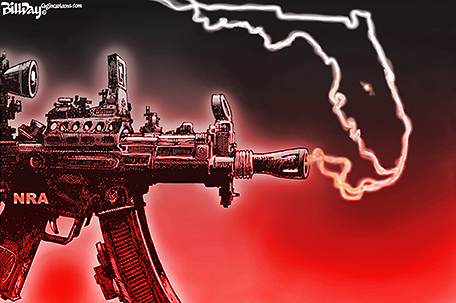 Orlando officials didn’t hesitate to brand the appalling and heinous massacre at a gay nightclub, domestic terrorism. The key word is domestic and using that word to describe the killing of at least 50 persons in the worst killing spree in American history as a home grown terror act is a huge departure from past practice. In almost all cases of mass shootings the last few years, officials have searched long and hard to ferret out any possible foreign ties by the shooter to “radical Islamic” groups. In the Orlando mass killing, Orlando officials and the FBI, even after branding the massacre “domestic terrorism,” didn’t depart from the script and quickly speculated that the alleged shooter, Omar Mateen, whose family is from Afghanistan, may have had “radical Islamic leanings.”

This may well prove to be the case as more details unfold about his life here. But no matter what influences drove him to his maddening act, Mateen is not Afghani. He was born, raised and educated in America, and even worked in some capacity in a security job. This makes his bloody act yet another grim case of not simply an act of domestic terrorism, but made-in-America terrorism.

Despite the years of carnage from these type of shootings, it’s still hard for many to come to grips with this bitter truth. This was painfully evident following the mass killing of fourteen persons in San Bernardino last December.  FBI officials were initially loath to call the killings domestic terrorism. When they did finally brand the killings terrorism, they made it clear that the killings would be investigated as a terrorist act “inspired by foreign terrorist organizations.”

However, this still begged the question of calling the massacre exactly what it was, namely domestic terrorism. The main alleged shooter in San Bernardino, as Mateen, was born, raised and studied in America. He was also a public employee.  The still nagging reluctance to label these massacres “domestic terrorism” fits in with the by now, well-established pattern of officials and virtually all GOP leaders to avoid at all costs using the term. The only exception is when those who commit mayhem and murder are Muslim. And according to numerous studies they are the rare exception since the overwhelming majority of those who commit targeted mayhem in this country are non-Muslim, invariably, white male, with a checkered history of crime, mental instability, and deeply influenced by right-wing rants. In Mateen’s case, there were reports that a possible motivation for his rampage was his offense at gays.

The refusal to consistently brand acts such as Mateen’s, “domestic terrorism,” strikes to the heart of how many Americans have been reflexively conditioned to regard terrorism. It’s almost always related to the Middle East and the perpetrators are presumed to be Muslim. The FBI’s working definition of what constitutes terrorism is: “Terrorism is an act done or threatened to in order to try to influence a public body or the citizenry, so it’s more of a political act.”

Even when South Carolina church shooter Dylann Roof plainly wrote that he had an animus toward blacks and acted out that insane animus by gunning down multiple black churchgoers, he still did not reach the elevated bar to rate being branded a “domestic terrorist.” The same held true for alleged Colorado Springs Planned parenthood clinic shooter Robert Lewis Dear who despite plainly targeting the clinic and giving the reason why, he also didn’t rate the label. Instead, the ritual was to officially whitewash, and air brush, the mass carnage they wreak with ritual condolences and prayers for the victims and their families.

The consequence of refusing to stray one jot from the textbook definition of who is a terrorist and what is terrorism on U.S. soil has consequences beyond disarming, confusing and in effect putting even more Americans in harm’s way from home-grown terrorists. It also is overloaded with a heavy mix of political calculation and cynical manipulation. A big part of which has been to take pot shots at President Obama for allegedly turning a blind eye toward the threat on America’s shores of radical Jihadist influenced groups. Obama is routinely denounced by GOP ultra-conservatives, and the Fox News scare machine, for supposedly refusing to use the term, “Jihadist terrorists,” for fear of offending Muslims.

Whether it’s shooting up a Planned Parenthood clinic, a center for the developmentally disabled, or any other domestic target, there’s simply no political incentive to call the shooters “domestic terrorists.” This crashes hard against the official narrative that made-in- America terrorists and terrorism constitute minimal or no real threat to life and property here. This danger supposedly only comes from a foreign group, Muslim of course.

Orlando officials departed from that script by calling the nightclub massacre exactly what it is, “domestic terrorism.” This departure is a much needed step toward coming to grips with the lethal threat of made-in-America terrorism.