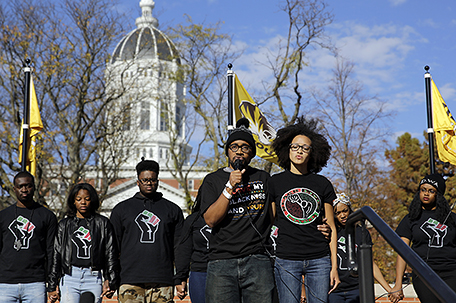 The Rev. Dr. Martin Luther King, Jr. once wrote, “It may be true that the law cannot make a man love me, but it can keep him from lynching me, and I think that’s pretty important.” Those students who are protesting campus racism need to keep that quote in mind as they assert their right to feel safe and comfortable on campus.  When the protests have been well defined and include an end game, such as the University of Missouri protests that toppled a President and Chancellor, they have been effective.   When protests broadly address issues like comfort, they are less successful.  And while it is satisfying to force a President (or a faculty member for that matter) to resign, the conditions of campus life will not necessarily change because there is a new leader.  Structural racism is so firmly embedded in our culture that it will take years, if not decades, of focused work and commitment to eliminate it.   Unfortunately, too many are less dedicated to eliminating institutional racism than they are to maintaining the status quo.  Consider, for example, the rhetoric during these Republican Presidential debates.  Or, consider the clumsily racist question Supreme Court Justice Antonin Scalia posed when he asked whether black students should attend “lesser schools” than schools like the University of Texas.

Student activism was one of the highlights of 2015.  Without waxing nostalgic, though, I’d suggest that some of these young activists take a page from the playbook written in the late 1960s and early 1970s, when protests shut campuses down for weeks.  Student protests led to curriculum review on some campuses, the development of academic departments like African American studies and Ethnic Studies, the addition of faculty of color, a commitment to enroll more students of color, and more.  “Back in the day”, we were far less concerned with “feeling” comfortable than with being empowered.  We wanted change, and we were willing to fight for it.   And, the change we wanted was tied to metrics.   More scholarships, more faculty, more student admits.  Not necessarily more comfort.

From my perspective discomfort is a good thing.  Discomfort is a sign that something is wrong.  Clearly there is much that is wrong on our campuses and in our nation.   Racism is alive and well, though it shows itself in different forms than it did decades ago.  The signs don’t say “white” or “colored” anymore.   Few “civilized” whites use the n— word, but expletives are hardly necessary when there is a coded language of exclusion.

Too many of us prefer complacency to discomfort.  We prefer to think that everything is fine. Too many would like to pretend that inequality and injustice are minor matters until a headline shakes us out of complacency – a young man shot 16 times while he is on his back, a young woman supposedly hanging herself in a jail cell.  Then there is protest, and anger, and rage.  Still, too little done to develop a sustainable attack on the racism that plagues our nation.  Student activists of 2015 could learn from the 60s activists, and they can also teach “mainstream” leaders 21st century organizing techniques.  And across generations, there must be teaching and learning about complacency and discomfort, about what change looks like, and about what people are willing to give up to get change.

This 2016 election year promises lots of conversation about justice and change.  Some political leaders will talk of “overregulation”, while others will suggest that we must pass new laws.  Some will suggest that affirmative action is no longer necessary, while others are clear that there remains unequal access to higher education.  When questions of law are debated, I find it useful to consider Dr. King’s view of law – it won’t make you love me, but it will keep you from lynching me and, as he said, “that’s pretty important”.  Dr. King described himself as a “drum major for justice”, not a drum major for comfort.  The campus activists who are raising critical questions are motivated by justice and cannot allow themselves to be sidelined with conversations about comfort.  Comfort will always be elusive in a racist society.  And that’s a good thing.

Julianne Malveaux is an author and economist based in Washington, DC. Her latest book “Are We Better Off? Race, Obama and Public Policy” will be released in 2016 and is available for preorder at www.juliannemalveaux.com

Missouri would likely be alone with 10 percent black faculty