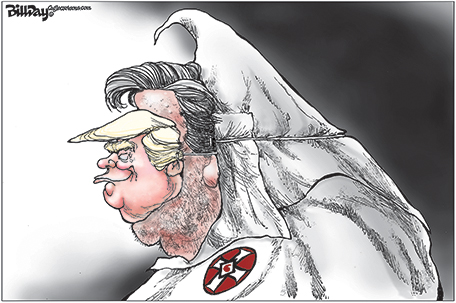 When he was running for President, #45 [Donald Trump]  asked African Americans what we had to lose by electing him.

Embracing the most dystopian view of the African- American community, he attacked our schools, our streets, crime rates, and unemployment, and suggested that we were so far down that electing him could only improve things.

Curiously, he never talked about racism. He never spoke of hate crimes, police killings, or racist symbols like Confederate flags and Confederate statues.  He never denounced some of his most racist supporters, including Klansman David Duke and alt-right leader Richard Spencer.  He just asked what Black folks had to lose by electing him!

We’ve been learning what we have to lose in these nearly five months of #45’s “leadership”.  He cynically used Presidents from Historically Black Colleges and Universities in a photo op, while cutting the education funds they need to stay open. He has been silent or slow in denouncing racist incidents that have occurred on his watch, including the lynching of Second Lt. Richard Collins III, and the murder of heroes Ricky John Best and Taliesin Myrddin Namkai-Meche, who stood up to the rabid racist Jeremy Joseph Christian, who was harassing two young women on a train in Portland (it took him three days to respond tepidly to that incident).  As of this writing, he has yet to utter a syllable of condemnation after a noose was hung in the Smithsonian Museum for African American History and Culture. These issues don’t appear to be important to him.

Are we surprised, then, that the budget he has submitted to Congress, would eviscerate civil rights protections in literally every area of our lives?  Already, Attorney General Jeff Sessions has moved back toward draconian jail sentences for minor crimes, reviewed consent decrees with police departments, looking to loosen them, and suggested that the Civil Rights Division of the Justice Department can be smaller.  The budget reflects that so clearly that Venita Gupta, who led the Civil Rights Division under President Obama and now leads the Leadership Conference on Civil Rights, says she sees this budget as a “setback” for civil rights.

The new budget calls for folding the Department of Labor Office of Federal Contract Compliance with the Equal Employment Opportunity Commission, although the two agencies do distinctly different work.  EEOC investigates civil rights complaints, while OFCCP audits contracts to ensure that employees have equal opportunity in terms of both promotions and pay.  The proposed budget cuts OFCCP by 16 percent and eliminates 130 full time employees.  When the other 470 employees are absorbed into the EEOC, that agency will not get an increased budget, despite its expanded mission.

Both agencies have been important in ensuring that civil rights violations are rectified.  In 2010, EEOC had more than 20 active cases that involved nooses.  Even as nooses continue to be hung as symbols of intimidation and hate, such as the noose hung at the African American Museum (the second hung at a Smithsonian museum in a week), the agency charged with investigating these complaints would have fewer resources to do so.

Similarly, OFCCP has won money settlements for thousands of employees, and changed employment requirements when those requirements have a discriminatory impact.  Women employees at Home Depot were among those receiving monetary settlements because of OFCCP investigations.

At the Department of Education (surprise, surprise), a woman who opposes affirmative action leads the Office of Civil Rights. That office will be cut significantly, limiting its ability to investigate discrimination complaints in school systems.  At the Environmental Protection Agency, efforts to look at environmental justice have been eliminated.

From the noose hung at the African American Museum to the defacing of LeBron James’ home with a racial slur, there is continuing evidence of the persistence of racism in our nation.  This racism is emboldened by a national leadership that is silent despite its manifestations.  We cannot be surprised.  Our 45th President, after all, once said he did not trust African- Americans to work on his accounting.  He probably would have failed any OFCCP audit, and certainly attracted several housing discrimination lawsuits decades ago.

The President who has been accused of discrimination has the power to ensure that his capitalist cronies face fewer accusations by weakening civil rights enforcement.  What did African- Americans lose when 45 was elected?  Among other things, we (and others) lost civil rights protections!

Julianne Malveaux is an economist, author, and Founder of Economic Education. Her podcast, “It’s Personal with Dr. J” is available on iTunes. Her latest book “Are We Better Off: Race, Obama and public policy is available via amazon.com