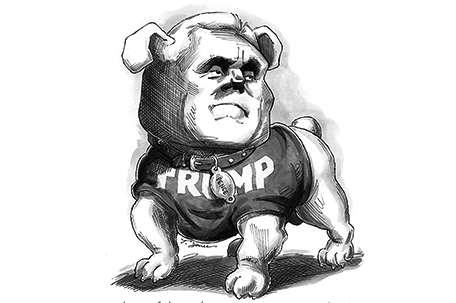 Put this in the category of be careful what you wish for.

The instant that Republican Presidential nominee Donald Trump won the White House, the chatter about impeaching him has been non-stop. The reasons many legal scholars, ethics experts, and political analysts give boil down to this: He has business dealings with foreign governments, most notably Russia, his family management arrangement still presents business conflicts, his possible violation of the Emoluments Clause, which prohibits presidents from buying influence with federal officials or receiving special treatment, and influence peddling and gift taking from foreign governments.

These are all sticking points that Trump hasn’t done much to address.

But even if he doesn’t, the move to impeach is a congressional call, and the chance of a GOP controlled House and Senate making that call is virtually nil at this point.

Trump’s business entanglements, however, could continue to make him run afoul of federal laws regarding  money, gifts and influence with foreign entities. While this could plop Trump onto the Congressional Hot Seat, that might be disastrous because if Trump ends up getting dismissed, the presidency would go to Mike Pence, the vice president elect.

While Trump is bumptious, obnoxious, and clownish, Pence is the prototypical ultra conservative in the gray flannel suit. He is business like, efficient, and knows how to run a political office. Trump will lean on him hard to do the behind the scenes, in the trenches work with Congress to get his initiatives through, something that will be no problem for him because he knows Congress and the GOP establishment is comfortable with him.

However, Pence has his own agenda. It’s an agenda that’s been honed over time as an arch conservative Indiana governor and congressperson. Civil liberties, civil rights, and education, and environmental groups know him too. They consistently gave him straight Fs on their report cards for elected officials. He got straight As on every conservative and ultra-conservative report card, including, unsurprisingly, the report card of the National Rifle Association.

The checklist of Pence’s positions on the issues reads like a what’s what of the Heritage Foundation and ultra-conservative think tank positions. His stances on abortion and same sex marriage are well-known. He’s rabidly against both and every time he’s had the chance to vote on the issues or propose initiatives when he was Indiana governor such as defunding Planned Parenthood and forcing most of its clinics to close or signing the most abortion-restrictive regulation in the nation, banning abortion even in cases where the fetus has a “genetic abnormality to do away with both, he’s done it with gusto. His fondest wish in his words, “I long for the day that Roe v. Wade is sent to the ash heap of history.”

Pence waged a take no prisoners war on Lesbian, Gay, Bisexual, and Transgendered advocates by backing the nation’s harshest “religious freedom” law as governor and as a congressman trying to torpedo federal funding that would support treatment for people suffering from H.I.V./ AIDS. He flatly opposed expanding hate crime laws to include violence against lesbian, gay, bisexual and transgender people. Pence would move fast to smash the firewall between religion and patriotic displays and the schools by mandating prayer in schools, reciting the pledge of allegiance, and making campuses a wide-open recruiting ground for ROTC and other military recruiters.

Trump is lambasted for the nightmarish America he’d usher in. Pence worked hard to bring it about in Indiana. If given the White House, Pence would finish the job.

While Trump talks about building a wall on the border, Pence would figure out a way to get the money and the congressional support to do it. He’s been at the immigrant bashing game a lot longer than Trump. In 2006, he was calling for guest workers to self-deport, and slammed the door on the relocation of Muslim refugees in his state from Syria and other war torn countries.

Public schools would be almost a thing of the past if Pence had his way. He cut millions from Indiana public schools and poured the money into vouchers, religious schools, and charter schools. He even tried to scrap the Common Core requirement as governor and as a congressperson joined a handful of rabidly conservative GOP congresspersons in opposing George W. Bush’s “No Child Left Behind” initiative. The one area of education that conservative GOP presidents, presidential candidates, and most GOP congresspersons tout is more funding for Historically Black Colleges. Not Pence, as a congressperson, he said “no” to a measure that would have earmarked nearly $100 million in funding to HBC and Hispanic colleges.

A Pence run White House would be one that denies climate change, demand that God be put in every aspect of American life, water down hate crime laws enforcement, wipe out public schools, wall build at the border, pump massive spending into the Pentagon, toss out all regulations on Wall Street, slash corporate taxes to nothing, knock out abortion, back unrestricted expansion of the Patriot Act, pack the Supreme Court and the federal judiciary with Antonin Scalia clone judges, and put guns in just about anyone’s hands.

While many are afraid of the nightmarish America Trump might usher in, Pence didn’t just talk about it, he worked hard to bring it about.

If Donald Trump were impeached, he’d get the chance to finish the job.

Earl Ofari Hutchinson is an author and political analyst. He is the author of the forthcoming The Obama Legacy (Middle Passage Press) He is an associate editor of New America Media. He is a weekly co-host of the Al Sharpton Show on Radio One. He is the host of the weekly Hutchinson Report on KPFK 90.7 FM Los Angeles and the Pacifica Network.