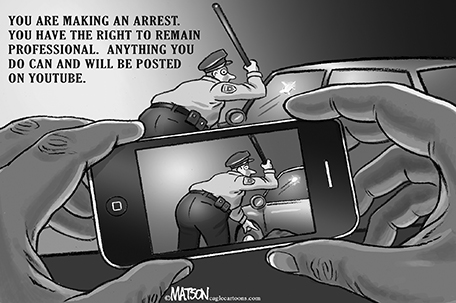 By Lee A. Daniels

The videos are becoming more and more difficult to watch, aren’t they?

But it’s not because we’ve become inured to the violence they show. It’s because the more we watch, the more we’re shocked by what we see. We watch Eric Garner, surrounded by people who take no action to try to save his life, die again and again. We watch Walter Scott crumple to the ground again and again. We watch Tamir Rice, a 12-year-old having played just a moment before with the complete abandon of a child, suddenly lying on the ground lifeless. We watch Sandra Bland being unjustly stopped and abused by a bully with a badge, and then being jailed, knowing that she will not survive her unjust imprisonment.

And it’s the knowing that the reality of White cops falsely arresting, beating and murdering unarmed Black and Hispanic Americans is, in fact, an old American story that provokes a profound sadness – and anger. As Georgetown University law professor and former prosecutor Paul Butler told the New York Times last week, videos have provided “the corroboration of what African-Americans have been saying for years.”

But, for all that we know about that history and about what happened in these particular cases, we’re still left with the haunting understanding that the answer to the powerful question behind the assertiveness of the #blacklivesmatter movement is: No, not yet.

Amid the series of videos, tweets and text messages of the last year or so that have laid bare the venomous hostility some clearly significant number of White police officers feel toward Black and Hispanic Americans, I’ve often thought of another moment in time when pictures of shocking police violence against unarmed Black civilians flashed around the country and the world.

I’m referring to the 1960s’ civil rights demonstrations in the South, particularly in Birmingham in 1963 and Selma, Alabama in 1965. Those were the years when that era’s technological advances in mass communication – namely, television news film – irrefutably exposed the anti-Black violence on which the South’s regime of Jim Crow rested, and who its chief street-level enforcers were.

The television film of those events that came flooding into the homes of Americans who lived outside the South via the evening and morning newscasts, and the vivid photographs that punctuated newspaper and magazine articles on civil rights made the Civil Rights Movement, not the U.S. war in Vietnam, America’s first “living room war.”

That visual documentation of the harsh reality of Black life in the South played a crucial role in the movement’s legislative successes in two ways. First, it strengthened the mass of Black Americans’ resolve to keep pushing against the structures of racism, North and South. Secondly, it, in effect, held up a mirror to White America, and a critical number of Whites declared they wouldn’t tolerate what they saw reflected there.

It’s still to be determined what will be the societal impact of the injustices and crimes captured in the videos taken by private citizens, and downloaded from business security cameras and police dashboard cameras and body cameras. These outrages and tragedies have obviously given impetus to the efforts of officials within the Obama administration, some political officeholders and others within the criminal justice community to change a system badly in need of top-to-bottom reform.

It’s also apparent that the candid-camera witnessing of the bully-boy misbehavior of some cops, and the high crimes of others has, via the social media, provoked a growing demand for reform among a segment of non-Black and – Brown Americans, too – some of whom also tell of their own unpleasant encounters with cops.

That overall figure still places the police as an institution very high – behind only the military and small businesses – in Americans’ estimation.

But the obvious question is: When will the next video showing an outrageous example of police misconduct surface?