Can even Cosby make a case he’s being racially targeted? 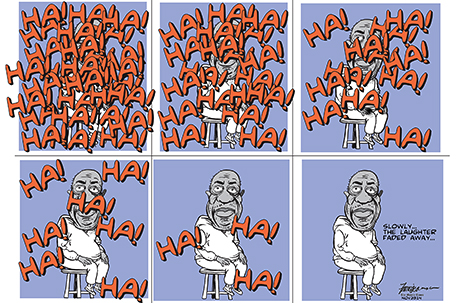 Cosby’s legal pass finally ran out in a Pennsylvania courtroom. And like so many prominent Black men, so did his racial pass.

Disgraced entertainer Bill Cosby did the predictable when he screamed there was racial bias in the jury selection in his scheduled trial. This wasn’t the first time Cosby screamed racial foul play. He did it when he claimed there was a racial motive behind the dozens of women who claimed he drugged, raped and sexually abused them for years. Then there is the report that Cosby was peeved that Al Sharpton and Jesse Jackson won’t publicly defend him. This may or may not be true. But Cosby is friends with both the civil rights leaders.

Cosby is hardly the only one screaming that the case against him is take your pick: the White man, White establishment, or a sensationalism- driven media establishment trying to bring down a wealthy, prominent Black man. Thousands of other Blacks —  and many Cosby fans — shouted the same thing virtually from the moment the accusations of sexual rapacity started flying against him. They endlessly cite prominent, wealthy celebs — from Woody Allen to Charlie Sheen to Bill O’Reilly — to bolster their contention that there is a vicious malignant, racial double standard in hammering Cosby, while letting the other big-name White sexual miscreants skip away relatively untouched.

Let’s be clear. Cosby is on trial for sexual assault. He will be found innocent or guilty based on the evidence, not because he’s Black.

The jury that he got, given the relatively sparse number of Blacks in the county, he’ll be tried in is about as racially balanced and fair as he’ll get. Also, he has the deep pockets to get the best legal team money can buy. They made sure they got the best jury he could get. He will be found innocent or guilty based on the evidence, not because he’s Black. Given the sheer number of alleged victims, the hideousness of their accusations, and that many of them were White women, Cosby got the biggest pass one could imagine, in not being hauled into a court before now by a prosecutor. He could thank his fame, name and money for that. Something few Blacks could ever dream of.

But can even Cosby make a case he’s being racially targeted? Yes and no. In his 2006 book, “The Audacity of Hope,” former President Obama ticked off a standard checklist of slights and abuses that he had routinely faced; security guards tailing him as he shopped in department stores, White couples who toss him their car keys as he stands outside a restaurant waiting for the valet, police cars pulling him over for no apparent reason.

Obama noted that he was subjected to these slights and insults during his college days and even after he launched his professional career. The racial attacks, and vilification and slanders certainly didn’t stop when he set foot in the Oval Office.

Obama happened to be the most glaring, and to some, surprising examples of a prominent Black subject to abuse. But legions of prominent Blacks have had the same or worse experiences. They tell harrowing tales about being embarrassed, harassed, and assailed by police, private security guards, storeowners, and clerks. Their names read like a who’s who of the wealthiest and biggest names among Blacks. This is especially the case with big name celebrities who wind up in a court docket. Mike Tyson, Michael Jackson, and of course, O.J. Simpson, loudly hinted that race had much to do with their legal woes.

Cosby, didn’t say it directly, but many others note that Black celebrities, professionals, business leaders, are hauled or slammed to the curb and arrested at any time no matter their status or appearance. Supposedly, it’s their very prominence that stirs resentment, jealousy, and harassment. It’s the old “uppity Negro” syndrome spruced up in modern day resentments over the wealth and success of prominent Blacks. Many Cosby defenders were quick to claim that he became a marked man when he floated the idea of buying NBC in 1992. The very notion of a Black man owning a mega media outlet was supposedly considered racial heresy.

There’s no proof of any racist conspiracy to nail Cosby because of this, or because of his fame. The Cosby-NBC rumored deal came almost a quarter century before his indictment in Pennsylvania. During those years, Cosby was lauded, feted, and praised as the nation’s number one dad. He was given every platform imaginable to chastise other Blacks for their alleged laggard, immoral failings. Even after the accusations against him mounted up of sexual misdeeds — and he confessed to giving drugs to one woman and getting drugs for other women he wanted to have sex in an affidavit he swore to in 2005, — legions of legal experts either defended him or claimed there were no legal grounds to prosecute him because the statute of limitations had long since run out on most of the claims. Cosby acknowledged that officials in Allegheny County bent over backward to make things “very, very smooth” for him.

That may be. But the bitter reality is that Cosby’s legal pass finally ran out in a Pennsylvania courtroom. And like so many prominent Black men, so did his racial pass.

Earl Ofari Hutchinson is an author and political analyst. He is an associate editor of New America Media. He is author of Cosby: The Clash of Race, Sex and Celebrity (Amazon Kindle). He is a weekly co-host of the Al Sharpton Show on Radio One. He is the host of the weekly Hutchinson Report on KPFK 90.7 FM Los Angeles and the Pacifica Network.