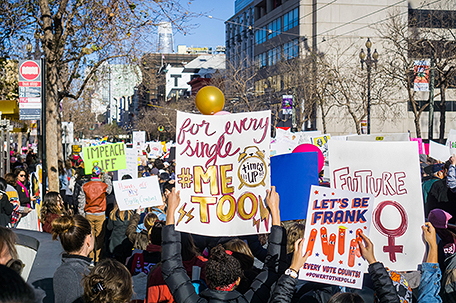 I have had about enough of some White women!

First, 53 percent of them vote for an odious genital-grabber. Then, they organize a woman’s march with momentum from the #MeToo movement, founded by Tarana Burke, but co-opted by White women like the wanna-be activist Alyssa Milano who was a mediocre actress back in the day. Then, bunches of them support Roy Moore, an Alabama pedophile who would be senator. Then the majority of them vote against progressive candidates like Georgia’s Stacy Abrams and Florida’s Andrew Gillum. Meanwhile, the four women who lead the Women’s March – Bob Bland, Tamika Mallory, Linda Sarsour, and Carmen Perez – are organizing for a January 19 march, and the self-proclaimed “founder” is demanding their resignation. Really?

Theresa Shook is the Hawaii grandmother who put an idea on Facebook in the wake of the 2016 election. “We should march,” she said. She did little else, and activist Bob Bland picked up the baton and ran with it. She recruited other women, seasoned activists in their own right. Tamika Mallory had led a march from New York to DC to stop gun violence. Carmen Perez has worked on criminal justice reform and has worked on Harry Belafonte’s “Gathering for Justice,” now serving as its executive director. Linda Sarsour, a former executive director of the Arab American Association of New York, has worked with Black Lives Matter and on police brutality issues. The four co-chairs of the Women’s March are the very picture of intersectionality and multicultural cooperation – White, Black, Latina, and Palestinian, they are the rainbow!

So where does Teresa Shook get off asking these women to step down from a movement they built? She, along with wannabe activist and has-been actress Alyssa Milano have demanded that the women’s march leaders “denounce” Nation of Islam Minister Louis Farrakhan. Why? They object to his anti-Semitic rhetoric. They object to the fact that Tamika Mallory attended his annual Savior’s Day this year. They say that anti-Semitism is hateful and dangerous, and they are right. But it wasn’t the Nation of Islam that shot up the Tree of Life Synagogue in Pittsburgh! White people’s hatred for Minister Farrakhan is irrational and, might I say, racist. He is the only person, the only human being that Congress has censured. No David Duke, no Charlottesville murderers, none of the hatemongers that have caused the racist tension in our nation. Just Minister Farrakhan. But then our society is consistent with its double standards and its demands that Black people bend over backward to prove that we, too, sing America.

With the fraught history between Black and White women, with their complicity in our rapes, and in the lynchings of Black men, White women have no right to demand anything of Black women, let alone that leaders like Tamika Mallory “denounce” Minister Farrakhan. For the record, the Minister — a man who has the unique power to galvanize Black people, especially Black men — really doesn’t care what people outside of the Nation of Islam, think of him. He understands this nation so well that he would accept any “denouncement” and keep it moving. But anyone demanding a denouncement of Farrakhan has no knowledge of American history, of African American history, of context, or of the unequal treatment that African American people experience that is a constant in our nation. And White women have consistently had little empathy for the way history has treated Black women.

Shook and Milano remind me of antebellum White women, hoop skirts and all, stomping their feet when they don’t get their way. Milano says she won’t speak if Tamika Mallory doesn’t denounce Farrakhan. So stay home, Alyssa. We won’t miss you. Other white women say they won’t march. Hundreds of thousands of others will. And Teresa Shook, the so-called founder, says she is demanding resignations. What is she going to do if she doesn’t get them?

Shook and Milano are the antitheses of coalition building and intersectionality. In an intersectional world, we come together to work on issues we agree on, in this case, the treatment of women. We decide to disagree on other matters. And sometimes, we agree to walk a mile in another woman’s shoes.

Black, White, Latina, Asian, Native, Palestinian and other women have starkly different experiences. We are joined by our gender but separated by the status of the men in our race, and by the differential privilege that some women experience. Miss Ann knew that enslaved women were being raped. She didn’t care. Now the descendants of enslaved women are willing to work with them, not FOR them, but with them. And the descendants of enslaved women have had enough foot-stomping, White woman privilege. No more.

There will be no women’s coalition if there is no mutual respect. Alyssa Milano and Teresa Shook and the other White women making foot-stomping demands have shown the hard-working Co-Chairs of the Women’s March a corrosive disrespect. They set the notion of a women’s coalition back decades. But they have also moved us forward because they have reminded us how important it is to consider history and context before we attempt to build a movement. White women, after all, are the mothers, daughters, sisters, and wives of the White men who practice oppression. Those who consider themselves “woke” need to check their sisters who are not.

Meanwhile, Tamika Mallory, Linda Sarsour, Carmen Perez, and Bob Bland need to stand their ground. They built something powerful and beautiful, even though there were fissures beneath the surface.   The struggle to dismantle patriarchy, racism, and predatory capitalism continues.

Julianne Malveaux is an author and economist. Her latest book, “Are We Better Off? Race, Obama and Public Policy”, is available via www.amazon.com. For booking, wholesale inquiries or for more info, visit www.juliannemalveaux.com.