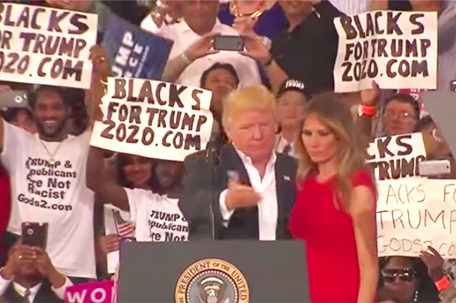 They had the best, closest and most visible spot in the crowd behind President Donald Trump at his much-touted recent pep rally in Melbourne, Florida. “They” being the handful of Blacks that enthusiastically waved the “Blacks for Trump” signs behind him. The Black Trump boosters didn’t stop there. They promoted and ballyhooed their website, primping Trump’s presumed re-election campaign in 2020, complete with a re-election website, Gods2.com.

Now, in case one thinks this is a recent Trump stunt or stunt by some Black odd balls to get their 15 minutes to bask of Trump’s presidential glow, it’s a little more involved. This bunch popped up at a Trump rally in Florida back in October a couple of weeks before his win. Their very conspicuous appearance on the political scene has prompted more than a few conspiratorial musings about whether and how much they’re being paid by Trump operatives. What does Trump know about them? This is coupled with some murky, even unsavory, facts about the one, identifiable cheerleader of the Trump cause in the group, Michael the Black Man.

He’s got a shadowy past that once garnered a lot of media attention when a few years back he emerged as head of a fringe Black nationalist/religious cult in South Florida. He, and more than a dozen other members of the group, were charged, not convicted, with conspiracy to commit murder. Since then, he and other group members have been hauled into court several times on various charges, but nothing has stuck. He’s parlayed this notoriety into one of the biggest scams or beliefs, depending on how one wants to look at Blacks for Trump on the political stage.

This still doesn’t answer the dangling question: Just what does Trump really know about his vocal and suddenly media-grabbing coterie of Black boosters? Trump certainly didn’t have any problem snatching one of their placards at the rally last October and waving it around. Whether he knows or cares about the shady history of the principal organizer is unknown. However, the group isn’t slithering under the public radar. Its website is chock full of racial rants, homespun bizarre conspiracy concoctions about war, religion and the secret global cabal that supposedly runs the planet.

This stuff should be more than even Trump could stomach, but that’s probably less important than the fact that they are out front, visible and imminently promotable as being proof that he’s got some Blacks beyond the handful of ex-jocks and entertainers he’s met with who are willing to wave signs backing him.

This also sort of boosts the case that he makes that he’s got much more Black support and votes than anybody ever believed he could possibly get. He actually did edge close to getting into double figures with Black voters. His talk of blacks being used and spit out when they’re no longer needed for Democratic votes, of underserved Black neighborhoods that are supposedly a mess with lousy public schools, of high crime and violence, and chronic joblessness and poverty, got some traction. His non-stop trash talk about Hillary Clinton played to the latent, and not so latent, loathing by some blacks towards the Clintons for allegedly being the architects of mass incarceration and the welfare gut.

Trump also can trot out a bunch of black apologists and spokespersons to toot his line that he genuinely wants to be an inclusive President and harbors no racial animus toward Blacks. This ploy finds a soft spot with more than a few Blacks, most notably Black conservative evangelicals, who are always deeply susceptible to GOP conservative pitches on some issues, such as abortion.

Now there is no evidence as of yet that any money has changed hands between anyone, or any group, connected with Trump to get Black placard wavers into the stands in well-positioned posts behind Trump at public appearances. The only thing that really counts for the moment is that by being there, they add an odd, curious, element to the usually overwhelming crowd of fevered, shouting, White Trump acolytes we see. This is exactly the kind of element that would appeal to a Trump who revels in doing everything humanly and politically possible to ensure that his presidency is the most bizarre, contentious and controversial in the annals of American politics. Blacks for Trump 2020 fits neatly into that mold.

Earl Ofari Hutchinson is an author and political analyst. He is the author of ‘In Scalia’s Shadow: The Trump Supreme Court’ ( Amazon Kindle). He is an associate editor of New America Media. He is a weekly co-host of the Al Sharpton Show on Radio One. He is the host of the weekly Hutchinson Report on KPFK 90.7 FM Los Angeles and the Pacifica Network.