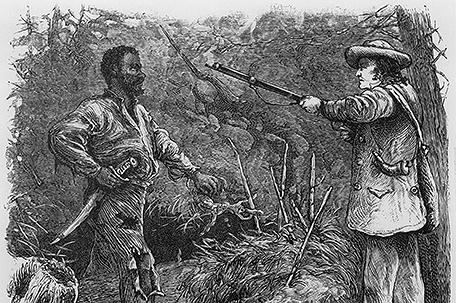 “On behalf our ancestors, who are voiceless, I will represent them until I join them, and will never let their suffering, pain, and indignities go in vain – we pledge to make Black history a key and significant part of America history.” –Rahim Islam

One of the reasons that I say that Black History is American History is because Black History speaks to what has been done to Black people by White people in all aspects of the birth and growth of America. It speaks of how Black people have struggled under severe oppression to win their freedom, and  of how they continue to fight for full citizenship and freedom, justice and equality in America.  This is extremely important because the scale was so pervasive and extraordinary, involving nearly 100 million Africans that didn’t choose to participate.

Millions of Africans were physically and brutally kidnapped and force into slavery under inhumane and treacherous conditions that have lasted several centuries and continue to impact their offspring. It is impossible to tell the American story without talking about this.

Carter G. Woodson, the founder of Black History Month, said of the commemoration of Black history and Black culture, “the celebration tends not to promote propaganda, but to counteract it by popularizing the truth.  It is not interested so much in Negro history as it is in history influenced by the Negro; for what the world needs is not a history of selected races or nations but the history of the world void of national bias, race hate, and religious prejudice.  There has been, therefore, no tendency to neither eulogize the Negro nor abuse his enemies. The aim has been to emphasize the facts in the belief that facts properly set forth will speak for themselves….”

The facts and the truth of the matter is the history of Black people in America is the history of America – this is the first truth that we must articulate and defend.  It must be defended by every facet of our country (i.e. government, religious, educational, cultural, etc.).  While I understand the need to have a Black History Month, this should only be the beginning of the journey towards telling the truth about America and American History. Having a Black History Month puts us on a road that should lead to America’s owning up to what it’s done to Black people and how interconnected its growth has been with ours.

In addition, not only should Black people’s contributions to America be documented, archived, and celebrated, but their decendants should also receive long overdue compensation for their ancestor’s contributions.

The Black community is a unique group deserving of unique and special treatment.  We are neither Native Americans, nor are we immigrants, despite our blood having been mixed with that of every other group.  The Black man in America was kidnapped from Africa and brought against his will – we were neither casualties of war nor incarcerated and imprisoned for some criminal behavior.  Our people were innocent victims of the worst kidnapping in the history of mankind that had both devastating effects on the country of Africa and its people our ancestors. Black History is American History.

Under White supremacist rule and the enslavement of Black people, nearly everything our people had was stolen to fuel the America we now know of today.  Our blood, our minds, our souls, our culture, our intellect, our humanity, our dignity, our spirituality, our families, our communities, even our precious lives were deeply deposited and outright stolen reside in the foundation of every aspect of America. This has to represent the biggest theft in the history of all mankind.  Millions of our ancestors were born and died in slavery with never a day of freedom.

This is troubling on its surface. But if we go deeper and think for just a moment, we can think for a minute and imagine the lies of those who have suffered under this type of oppression. The Black man did nothing to deserve this treatment. Nothing. No human being deserves to be treated like our ancestors were treated. The theft is just so breathtaking and shocking, one must ask what the human value of such a heist is. What cost have the victims paid? I believe that these and other reasons are why America has acted like slavery wasn’t an institution and tries to minimize its magnitude.

Just the other day, I heard how appalled someone was with President Donald Trump because he refuses to verbalize the word “Jew” when referring to the Holocaust. This person went on and on about how this was devastating, and should never be done by a sitting president.  The person wasn’t even Jewish, but was truly dismayed that this could happened, calling Trump an anti-Semite.  He laid out his argument that the Holocaust was a “stain” on the whole humanity and that we should use this opportunity to show the inhumanity of man’s wicked potential and to always keep this “evil” in check.

First and foremost, I agree with the person and I agree with the premise, but I thought for a minute “What about the Black Holocaust?!” How hypocritical is America and its White leadership when it comes to what they have done, and continue to do, to Black people in America? It’s easy to point the fingers at others and not look into your own backyard.  Yes, I believe that the Jewish Holocaust was an absolutely deplorable and sad page of human history and should never ever be forgotten. The Jewish community continues to keep this flag raised high, and for very good reasons.

So why isn’t there at least an equal mention or reference of the pain of the Black Holocaust by these same “do good” people?  Isn’t the torture of nearly 100 million Black people over a period of 300 years equal to the genocide of nearly 6 million Jews? In addition, there was an attempt to fix the structural and financial damage in the form of reparations for the tens of thousands of Jews impacted by the Jewish Holocaust despite there being no actual equitable compensation possible.

In the case of the Jewish community, there was at least an effort made.

I have no intention of minimizing the Jewish Holocaust, because I stand with the Jewish people in their efforts to not only make sure that we never see anything similar to the Holocaust again, but also to fight the kind of evil mind that could produce this kind of thing. But, where is the Jewish community when it comes to the Black Holocaust?  If anyone should be standing side-by-side with us, it’s them.

Businessmen in America and throughout Europe profited from the suffering of our people. The whole world stays silent, and it’s a damned shame. Trillions of dollars were generated, new industries developed, and the transportation and other sectors were advanced. In fact, it’s impossible to imagine what the world would look like today without the uncompensated contributions of the Black man in America.  The enslavement of our people has to be viewed as one of the biggest crimes in human history. Yet, not person or entity has ever been held accountable and the mere mention of reparations raises the hairs on the backs of the necks of White people, and some truly laughable arguments are made in service of denying the victims.

Most people know about slavery in America, but they have been conditioned to treat it as something that “just” happened and have no problem telling Blacks to “get over it”. There are no living victims today. The culprits died long, long ago and therefore, any discussion not is irrelevant. This is a preposterous, insane part of an American pathology of White supremacy and denial.  By taking this position, they continue to uphold the legitimacy of this act and of their superiority. There is no recompense, no attrition, no asking for forgiveness, no correction, and definitely no reparations.

We have a court system, civil and criminal, that seeks to protect the victim.  In a criminal case, even when the one who actually perpetrated the crime is unable to be held accountable, the person who benefits from the crime can be charged or at least the benefit can be forfeited.  Example: If I stole something of value and died, but left the value to my children, that item could not only be taken, but the person who received it could be charged with receipt of stolen property, especially if they knew the goods were stolen and they accepted them.

We wouldn’t even be having this conversation if, like the Jewish Holocaust, there was some acknowledgement of the wrong and effort to try to repair things. Instead, Black people got, and continue to get, nothing.  In fact, a Civil War erupted that centered on maintaining slavery.  To add insult to injury, Blacks were freed in 1863 with absolutely nothing but the shirts on their backs, and would endure the next 100 years of open racism, vicious and terroristic hostilities and extreme levels of hate and discrimination.

President Lyndon Johnson once said, “You do not wipe away the scars of centuries by saying: ‘now, you are free to go where you want, do as you desire, and choose the leaders you please.’ You do not take a man who for years has been hobbled by chains, liberate him, bring him to the starting line of a race, saying, ‘you are free to compete with all the others,’ and still justly believe you have been completely fair . . . This is the next and more profound stage of the battle for civil rights. We seek not just freedom but opportunity—not just legal equity but human ability—not just equality as a right and a theory, but equality as a fact and as a result.”

The enslavement and overall treatment of Black people in America is neither a bad dream nor a figure of my imagination. It happened,  and the legacy of slavery is as alive today as slavery itself was yesterday.  Unfortunately, the legacy of slavery, like a human cancer will continue to grow because America not only fails to acknowledge what it’s done, but also lacks the capacity and ability to try to figure out how to correct what continues to impacts nearly 50 million Black people.