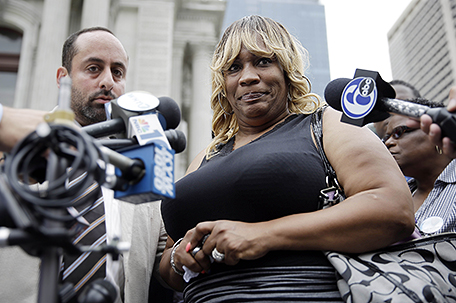 ABOVE PHOTO:  Tanya Brown-Dickerson the mother of Brandon Tate-Brown who was shot by Philadelphia police as he ran during a traffic stop, speaks during a news conference Monday, June 15, 2015, outside of City Hall in Philadelphia. Brown-Dickerson is suing the city over the fatal shooting of her son last December. (AP Photo/Matt Rourke)

On Tuesday, December 15, we  remembered the senseless police killing of 25-year-old Brandon Tate-Brown. We will also remember Michael Brown, Freddie Gray, Eric Gardner, Laquan McDonald, Tamir Rice and countless others, 385 as of May 2015, that have been shot or killed by police.  A Washington Post analysis noted that that number came out to two officer-involved shooting deaths per day and 2015 is not over.

Police Brutality, Stop and Frisk, and Police killings are all too common in the African American community. Add to that reality inaccurate and scattered police data, and that number greatly increases. It is imperative to continue to rally, picket and bring these offenses before the public and become the conscience of the police department that will not allow nonsensical police brutality to continue.

Brandon Tate-Brown was killed by a police bullet after an altercation with the arresting officers on Frankford Avenue. The details of his death are different from the others, yet they are the same.

A black man has a 28 percent more chance of being pulled over and investigated than 12.5 percent of white men. A young black teen is 21 times more likely to be killed by a cop than a white teen.

The police department and its officers must take responsibility for their actions, and be held accountable for their actions. The tired phrase “I feared for my life and my safety” is simply not acceptable when you shoot a black man 16 times (Laquan Douglas) and then attempt to reload your gun to continue shooting him. The government must intervene in these cases of over-aggression and sometimes just blatant murder.

I believe that we as citizens in our communities have a right to a civilian police force and criminal justice system that is free from excessive force, racial discrimination, police brutality and prison for-profit corporations.

OIC of America is a non-profit organization that provides low-income people with the tools and support to overcome barriers to economic opportunity and social justice in America.