How Bill killed Netflix and Chill 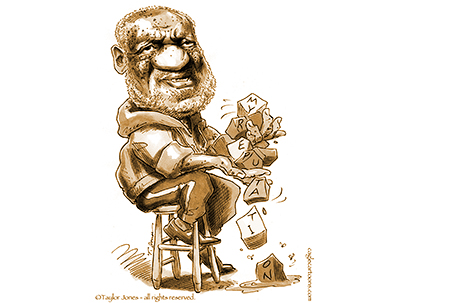 As an African-American woman, the Bill Cosby trial was unsettling. A part of me hoped that the charges were simply a misunderstanding or an attempt to extort the incredibly successful comedian, actor, director, author, and philanthropist. That’s the easiest explanation, right? And if those charges could be explained away, it would allow us to retain our love and reverence for him and the work he’s done all over the world. I for one regularly watched “The Cosby Show” and “A Different World” was my favorite sitcom. During my daughter’s senior year of high school, I introduced her to the show and she too became a fan of it and him. My young son, growing up in a predominantly White suburban neighborhood, sat mesmerized with each episode of “Little Bill;” he’d never seen a cartoon about a brown boy on television. And it made me proud to see men of all races tuck their copy of “Fatherhood” under their arm as they exited the subway train.

But testimony from two alleged victims, Andrea Constand and Kelly Johnson, and a myriad of experts painted an eerie picture of “America’s Dad.” Andrea Constand, the former Director of Operations for Women’s Basketball at Temple University, Cosby’s Alma Mater, detailed her friendship and mentorship with Cosby. She said how he helped her network and even offered advice on personal matters such as how to navigate rooming with her recently arrived cousin. Constand’s neighbor confirmed that not only was he familiar with their friendship, but he and Constand  would catch up over dinner in their respective apartments, insinuating that having dinner at Cosby’s home was also innocent. She didn’t deny that Cosby flirted and made a couple of passes, but she dismissed them and continued to feel safe. Even after he attempted to unzip her pants, she admitted to feeling awkward in the moment, but brushed the incident aside and without ever discussing it, was confident it would never happen again.

Johnson gave a similar depiction of her incident with Cosby. Having worked for Bill’s late agent, Tom Illius, she endured daily emotional and verbal abuse. Cosby reached out and established a friendship with her too, gaining her trust and ultimately offering a TV role and a contract. He also provided fatherly advice as she was stressed due to her job and a custody battle with her son’s father, Maxi Priest. As Cosby made himself available to discuss these matters, he also offered to help her improve her acting skills. Cosby invited her to his home where they rehearsed a script which called for them to kiss. She told him she was unable to do so and subsequently left. Johnson described their relationship as having “chilled” after her unwillingness to kiss him.

While six years had passed between Johnson’s visit described above and the incident in question, prosecutors noted that upon the very next visit to Cosby’s home, the alleged assault on Constand occurred. According to testimony from both women, they were stressed over personal matters so Cosby offered pills to help them relax. Based upon their conversation and the nature of their relationship, it seemed logical, almost caring on his part. While Johnsonwas hesitant to take it and tried to hide the pill under her tongue, Constand took hers willingly under the assumption they were herbal. It’s unclear what Johnson was given but Cosby admitted to giving Andrea one and a half pills of over-the-counter Benadryl. Both women testified to feeling incapacitated then waking up to Cosby sexually assaulting them. And in a deposition, Cosby admitted to being romantically interested but not wanting to make his intentions known; he wanted to first establish trust and a friendship before making his move.

And there are countless men who use the same M.O. After establishing a friendship, they start to flirt and make subtle passes. If it’s not reciprocated, they wait patiently in the friend zone for the opportunity to become more. They listen to our complaints, offer advice, perform favors and run errands. They extend Netflix and Chill invites and we accept without giving a second thought to potential dangers. But it may be time to decline such invites. Here’s why:

In a survey taken by Rape Response Services, nearly one in two women has experienced sexual violence victimization (unwanted sexual touching, exploitation, harassment, etc). And according to The Bureau of Justice Statistics, 6 in 10 sexual assault victims said they were assaulted by an intimate partner, relative, friend or acquaintance…for college women, it’s 9 out of 10.

Each state has its own definition of sexual assault, but Women’s Law defines it generally as unwanted sexual contact, sexual contact without consent, and sexual contact against one’s will, not just by physical force. With regard to the definition, force includes psychological coercion such as being “talked into it”, threats to cause harm to the person or a loved one if the person doesn’t submit or other non-physical circumstances in which the victim feels that there is no other option than to submit to the unwanted sexual activity. It includes situations where the victim may be drunk, drugged, asleep, unconscious, or for any reason unable to consent. And unlike a violent rape, proving sexual assault is difficult especially if there’s any hint of a prior relationship.

Unaware of how sexual assault is defined; we accept that invitation to “Netflix and Chill” assuming there’s no subversive meaning. While there, we casually dismiss an unwanted hand or body part which was “accidentally” brushed against our breast or buttocks. We rationalize being talked into having sex or feeling violated waking up to our friend performing a sexual act without our consent. Men who push the envelope and force sex justify their behavior with the assumption that consensual sex is implied because the invite to a home was accepted. And if an assault should happen, the first question the victim hears from the perpetrator and others is, “why did you go over there?” What’s even worse, we ask that question of ourselves and conclude that it was somehow our fault. We wore the wrong clothing. We drank too much. We kissed him.

Regardless of what we wore, how much we drank or how many pills were given, never is sexual assault our fault. But we can prevent it by hanging out in public settings, refusing to go to their home and not inviting them to ours. If you happen to be in a new relationship, I recommend being upfront by discussing intentions, making clear boundaries and telling a few friends where you’ll be and with whom you’re spending your time. Once you arrive, if he’s a gentleman, he’ll honor everything discussed. But if you’re not given clarity beforehand, don’t go and if you realize he’s lured you there under false pretenses, leave. Oh. Make your own drink and don’t accept any form of medication from him. No friendship or mentorship is worth it.

A native of Washington, DC, Elona Washington is the Amazon best-selling co-author of two anthologies and a blogger for the acclaimed Huffington Post. She’s made guest appearances on HuffPost Live, as well as prominent radio shows and podcasts.

Elona’s most recent book, “From Ivy League To Stripper Life,” attained Amazon bestseller status in two categories the day of its release. Between these pages, she candidly discusses her life as a stripper, why her promising life spiraled out of control and the lessons learned along the way.

With an undergraduate degree from Howard University, Elona later obtained her Master of Science in Management from the University of Maryland University College. She’s a member of Delta Sigma Theta Sorority, Inc., and a mother of two. She currently resides in Norristown, Pennsylvania.