Benghazi hearings to sink Clinton have been a stupendous failure 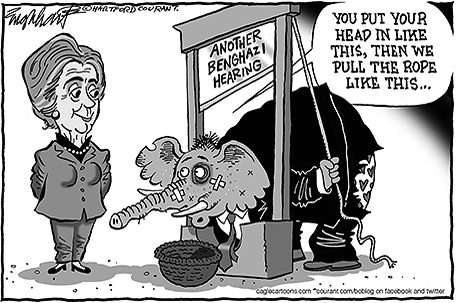 Former House speaker candidate Kevin McCarthy infuriated many of his GOP compatriots when he spoke the truth some weeks ago. His heretical truth is that the endless and relentless GOP contrived and manufactured Benghazi hearings were a blatant partisan political effort to torpedo Hillary Clinton’s presidential candidacy. His exact quote: “Everybody thought Hillary Clinton was unbeatable, right? But we put together a Benghazi special committee and what are her numbers todayers are dropping.”

Since that was the GOP’s sole intent in once again dragging Clinton before the Benghazi witch hunt committee, her performance on Oct. 21 and the reaction to it shows it’s been a stupendous failure. Clinton’s poll numbers are still solid. She’s maintained her gap over Democratic presidential rival Bernie Sanders among likely Democratic voters. Her near flawless, self-assured performance, and command of the real issues at the first Democratic presidential debate has been widely hailed.

In a sense, that raised the stakes when it came to the GOP’s near maniacal frenzy to stop Clinton. The committee’s focus is on Clinton’s private emails to make the case that as Secretary of State she either badly bungled, or deliberately lied when it came to the U.S. response to the Benghazi attack.

This doesn’t really matter. The relentless GOP narrative is that Clinton illegally used her private email account to conduct State Department business and that those emails will show a pattern of neglect, incompetence and cover-up. The story got even bigger when a tantalizing hint was dropped that there could even be a criminal probe into Clinton’s supposed misuse of her emails.

None of this is new stuff. It’s been hashed and rehashed so much that if anything the raw facts about the emails have been blurred or distorted. But , one fact is clear. There is absolutely no proof that Clinton did anything wrong in using her private server to conduct some State Department business. There was no legal prohibition on any government employee using their personal email account to conduct government business at the time that she did it. The GOP has tried hard to poison the public well with the suggestion that Clinton may have destroyed or mishandled, either deliberately or accidentally, government documents that are tied to Benghazi.

But there is no proof of that either.

However, the point of the GOP’s obsession with Hillary Clinton’s emails is the same as its constant pounding on  her for her alleged missteps and conniving on Benghazi: embarrass and discredit her as a 2016 presidential candidate. The contrived email and Benghazi flap fit neatly into the GOP’s now chosen point of attack, which is to tar her as someone who is totally untrustworthy, even a congenital liar, and a potential threat to national security.

The GOP-controlled Benghazi committee received nearly 1,000 more Clinton emails in September. This goes with the nearly 70, 000 pages of Benghazi related documents it has gotten from the State Department to date. Yet other than inference, innuendo, and unfounded and very unproven accusations against Clinton, the GOP has made no case against her. But, as McCarthy in a very uncharacteristic moment of candor said, it’s not about Clinton’s alleged lies, cover-up, and dereliction in the death of four Americans at Benghazi, but her poll numbers.

Earl Ofari Hutchinson is an author and political analyst. He is the author of Torpedoing Hillary: The GOP Plan to Stop a Clinton White House (Amazon ebook). He is a frequent MSNBC contributor. He is an associate editor of New America Media. He is a weekly co-host of the Al Sharpton Show on Radio One. He is the host of the weekly Hutchinson Report on KPFK 90.7 FM Los Angeles and the Pacifica Network