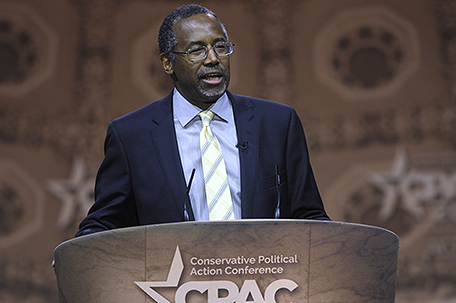 Dr. Ben Carson is worse than a bad nightmare. A nightmare keeps recurring, and recurring and recurring. But at least with a nightmare, you wake up in one piece, with no scratches, bruises, cuts, or injuries. With Dr. Carson, though, there’s no end to the torture. The horror is that he invariably crops up whenever his right-wing GOP handlers need a black to make a dumb quip, dig, slur, or insult of women, blacks, Democrats, and especially President Barack Obama.

He was in predictable form again when he piled on Obama to a recent interviewer with the not-so-veiled hint that he’s “not qualified” to be the nation’s commander in chief. This is, of course, the echo of the GOP’s latest hit attack on Obama for his alleged foreign policy gaffes. But Dr. Carson didn’t stop there — he earlier had dredged up the well-worn, tired, Nazi label to tag those who try to silence dissent. Carson didn’t explicitly name who the “those” were but he meant Obama and the Democrats and the dissenter was him.

There it was on naked display, the two pet themes of the ultra-right — the supposed bullying by liberals of conservatives, particularly a black conservative, and a supposedly weak kneed president on foreign policy. The trotting out of Dr. Carson to deliver the right-wing gospel from on high fits in with yet another by now familiar ploy used by ultra-conservatives during the Obama years. And floating Dr. Carson as a trial balloon as a possible GOP presidential contender in 2016. As always, some in the media take the bait, and start a mild buzz of speculation about whether Dr. Carson will actually toss his hat in the ring.

This is more than political theater of the absurd. It gets even more attention for the GOP. But more importantly, it touches a deep, dark, and throbbing pulse among legions of ultra-conservatives who think that Obama and many Democrats are communists, gays are immoral, and that the healthcare reform law is exactly what Dr. Carson has likened it to “slavery,” meaning the tyrannical intrusion by big government into their lives.

Mainstream GOP leaders can’t utter these inanities. They must always give appearance that they are above the dirt, mud, and hate-slinging fray. So they leave it to a well-paid stalking horse like Dr. Carson to do their dirty work for them. But that’s only part of Dr. Carson’s worth to conservatives.

He gives the illusion that the GOP is a race-neutral party that has a plethora of big name, African Americans as their visible point men and women, and who speak with authority. The cast of shameless black panderers and hucksters that the GOP has trotted out and plopped in front of the TV cameras during the past few years has been both endless and embarrassing. But they still keep them coming.

The idiotic comparison of the Affordable Care Act to slavery was a perfect example of how the GOP craftily manages to weld race and its current signature hit issue of Obama, the health care law, into one package to play on right-wing hysteria over the law. The GOP understands the fundamental political axiom that self-interest rules politics as well, if not better, than the Democrats. Party leaders have long known that many blue-collar white voters, especially male voters, can be easily aroused to vote and shout loudly on the emotional wedge issues: abortion, family values, anti-gay marriage and tax cuts.

Dr. Carson fits neatly into this script. He’s an African American with name identification who once had some admiration among blacks. But a discredited Dr. Carson is less important is serviceable tool that ultra-conservatives to play their version of the race card, to depict him, a black man, as a victim of allegedly closet racist Democrats who seethe at the notion of a black man who dares have the express views that don’t parrot the Democratic Party’s positions.

They’ve turned this tact into a studied art with black conservatives such as Clarence Thomas. But Dr. Carson makes far better copy than Thomas. Because unlike Thomas, he actually speaks and when he does he’ll say something just ridiculous enough that’s it’s a newsy quotable sound bite and that insures him some more spots on the TV talk show circuit.

Dr. Carson’s latest inanity won’t be the last. In the run-up to the November mid-term elections, he’ll almost certainly be an ubiquitous media presence, spewing more muddled digs at Obama, and the Democrats, all the while playing his alleged victim-hood at their hands for all it’s worth. He’ll remain worse than a bad nightmare.

Earl Ofari Hutchinson is an author and political analyst. He is a frequent political commentator on MSNBC and a weekly co-host of the Al Sharpton Show on American Urban Radio Network. He is the author of How Obama Governed: The Year of Crisis and Challenge. He is an associate editor of New America Media. He is the host of the weekly Hutchinson Report on KPFK-Radio and the Pacifica Network.