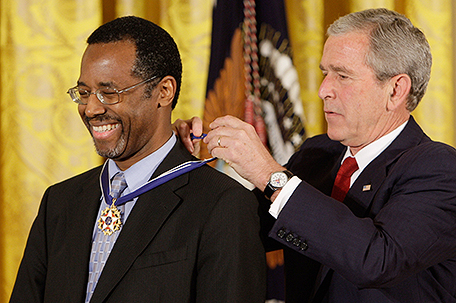 Dr. Ben Carson’s shoot from the lip, crackpot quips, digs, and insults at women, blacks, Democrats, and especially President Barack Obama are fast becoming the stuff of legend. This time he almost outdid his past inane cracks with the zinger that the Affordable Care Act is the worst thing since slavery. Carson has parlayed his zany potshots into a plum spot as a Fox News Network commentator.

This is the sorry case of a man who at one time had the respect of many for his moving, inspiring story of overcoming hardships to become a highly respected medical professional and who now has prostituted himself to grab a quick headline from a soundbite-driven, titillation media that hungrily eats up anything that someone like a Carson dishes out.

But it’s also the case of a man such as Carson and his ilk that serve a calculating purpose. They get attention for the GOP. While they are zany, they also touch a deep, dark, and throbbing pulse among legions of ultra-conservatives who think that Obama and many Democrats are communists, gays are immoral, and that the health care reform law is exactly what Carson likened it to “slavery,” meaning the tyrannical intrusion by big government into their lives. Carson actually went even further than the slavery dig and likened the health care law to the old communist dictatorship in the Soviet Union run by Lenin.

Mainstream GOP leaders can’t utter these inanities. They must always give appearance that they are above the dirt, mud, and hate slinging fray. So they leave it to a well-paid stalking horse like Carson to do their dirty work for them. But that’s only part of Carson’s worth to conservatives.

He gives the illusion that the GOP is a race-neutral party that has a plethora of big name, African-Americans as their visible point men and women, and who speak with authority. The cast of shameless black panderers and hucksters that the GOP has trotted out and plopped in front of the TV cameras during the past few years has been both endless and embarrassing. But they still keep them coming.

The idiotic comparison of the Affordable Care Act to slavery was a perfect example of how the GOP craftily manages to weld race and its current signature hit issue of Obama, the health care law, into one package to play on right-wing hysteria over the law. The GOP understands the fundamental political axiom that self-interest rules politics as well, if not better, than the Democrats. Party leaders have long known that blue-collar white voters, especially male voters, can be easily aroused to vote and shout loudly on the emotional wedge issues: abortion, family values, anti-gay marriage and tax cuts.

For months before passage, they whipped up mania and borderline racism against the health care law. This was glaringly apparent in ferocity and bile spouted by the shock troops that the GOP leaders in conjunction with the Tea Party brought out to harangue, harass and bully Democratic legislators on the eve of the health care vote. For the months after passage of the act and its upholding by the Supreme Court the GOP has never relented in the drumbeat attack up on it. That includes the dozens of House votes to defund or outright kill it. And then everything it making it the prime bargaining chip in its fresh assault on government with the partial shutdown.

Carson fits neatly into this script. He’s an African American with name identification and some admiration among blacks, though that’s dwindling fast. We can be sure then that this won’t be the last crackpot quip that we’ll hear from Carson. Sadly, he’ll continue to be the worst thing that happened to us since he opened his mouth.

Earl Ofari Hutchinson is an author and political analyst. He is a frequent political commentator on MSNBC and a weekly co-host of the Al Sharpton Show on American Urban Radio Network. He is the author of How Obama Governed: The Year of Crisis and Challenge. He is an associate editor of New America Media. He is the host of the weekly Hutchinson Report on KPFK-Radio and the Pacifica Network.