Believe it or not, there is a method to Ben Carson’s zaniness 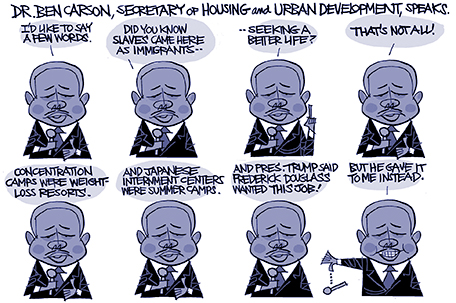 This is more than political theater of the absurd. It touches the throbbing pulse of ultra-conservatives.

Make no mistake, there’s a calculated method to Dr. Ben Carson’s zaniness. There’s absolutely no way the Secretary of the Department of Housing and Urban Development could not know that making an idiotic crack that Blacks took what amounted to a busman’s holiday excursion to America, and in the process poked around for a few plumb opportunities before deciding to decamp here would not ignite the predictable Twitter, Facebook and media firestorm. It did. And that’s been the case each time Carson tosses out an absurd zinger.

This was the case when he said there’d have been no Holocaust if the Jews had guns. Or how about that a dead body riddled with bullets is a small price to defend the Second Amendment? Or, that the Great Pyramids of Giza had no other purpose than to store grain? And of course — his pièce de résistance, calling Obamacare the worst thing that has happened in this nation since slavery.

Now, bear in mind that Carson isn’t just prattling off in his shower or at a bull session with some cronies. He’s made these looney quips either on national talk shows or at major political gatherings, such as CPAC. He gave his absurdly hilarious take on slavery that blacks wound up here not in chains, but as immigrants seeking “opportunities” at an official meeting of HUD employees.

Carson has always had the boundless capacity to crop up when his right-wing GOP handlers need a Black to make a dumb quip, a dig, a slur of some kind or to insult women, fellow Blacks, Democrats and especially former President Barack Obama. Then when he incites the howls, his handlers circle the wagons and scream that he’s being bullied by other Blacks who simply can’t stomach the thought of a Black conservative who dares to go against liberal orthodoxy. The media almost always takes the bait, and shoves Carson and his critics to the front of the news cycle, guaranteeing that even more tongues will wag about him.

This is more than a political theater of the absurd which gets even more attention for the GOP.  It touches a deep, dark and throbbing pulse among legions of ultra-conservatives who still passionately believe that Obama and many Democrats are communists, gays are immoral, and that the health care reform law is exactly what Carson has likened it to “slavery,” meaning the tyrannical intrusion by big government into their lives.

Mainstream GOP leaders can’t utter these inanities. They must always give appearance that they are above the dirt, mud, and hate slinging fray. So, they leave it to a well-paid stalking horse like Carson to do their dirty work for them.

But that’s only part of Carson’s worth to conservatives.

Carson gives the illusion that the GOP is a race-neutral party that has a plethora of big name, African-Americans as visible point men and women who speak with authority. This cast of shameless Black panderers and hucksters that the GOP trots out and plops in front of  TV cameras during the past few years has been both endless and embarrassing. But they still keep them coming.

When Carson likened the Affordable Care Act to slavery, it was a perfect example of how the GOP craftily manages to weld race and its current signature hit issue of Obama and the health care law into one package to play on right-wing hysteria over the law. The GOP understands the fundamental political axiom that self-interest rules politics as well, if not better, than the Democrats. Party leaders have long known that many blue-collar White voters, especially male voters, can be easily aroused to vote and shout loudly on the emotional wedge issues: abortion, family values, anti-gay marriage and tax cuts.

Carson fits neatly into this script. He’s an African-American with name identification who once had some respect among Blacks. But even a discredited Carson among Blacks is less important than the fact that he’s a serviceable tool used by ultra-conservatives to play their version of the race card by depicting him as a victim of allegedly closet-racist Democrats, who seethe at the notion of a Black man who has the tenacity to express views that don’t parrot the Democratic Party’s positions.

Carson will almost certainly get even more media attention as Trump’s point man at HUD, a government agency that ladles out billions annually in public housing subsidies, rental assistance and housing finance activities, employs more than 8,000 workers and administrators and operates more than 100 subsidy programs. And since Carson is on record waving away housing discrimination suits, lambasting the supposed over-dependence on “social safety net” programs, getting government out of competition with private enterprise and denouncing anything that supposedly deadens individual initiative, it’s no stretch to guess that he, if left to his devices, could be a one-man wrecking crew of everything HUD stands for.

Carson will always get snickers, chuckles and lampooning from his legions of black and liberal foes. But that just makes him even more serviceable to Trump and the GOP.

Earl Ofari Hutchinson is an author and political analyst. He is the author of ‘In Scalia’s Shadow: The Trump Supreme Court’ ( Amazon Kindle). He is an associate editor of New America Media. He is a weekly co-host of the Al Sharpton Show on Radio One. He is the host of the weekly Hutchinson Report on KPFK 90.7 FM Los Angeles and the Pacifica Network.