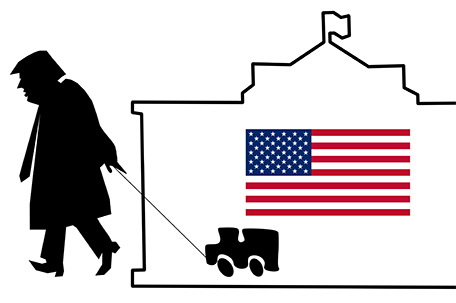 The 2020 presidential election ended over a month ago. In less than a month, Donald John Trump will take his place as an ex-president having failed in his reelection bid for a second term. U.S. President Number 45 will take his place in history as yet another “one-and-done” failure. The first since George H.W. Bush some 30 years ago.

So…yay?  Wasn’t beating Trump supposed to make us all feel like we had done something?  Saved democracy from the forces of fascism and authoritarianism?  Restored a sense of dignity and decorum to the presidency?   Made it safe to go back on Twitter without losing our happy state of mind over whatever Trump’s little piggy fingers were ranting over?

Until high noon on January 20 comes, Trump will spend every waking moment trying to deny the will of the American people, and his fellow collaborators in the Republican Party will aid and assist him any which way they can. The Proud Boys,Patriot Prayer and all the other right-wing goon squads are standing by ready and waiting to take Trump’s grievance and their entitlement to the streets to fight it out with Black Lives Matter protesters and Antifa activists.

Hopefully, this won’t end up in a presidential inauguration made up not by throngs of cheering supporters for President Joe Biden and Vice-President Kamala Harris, but running street fights and gun battles between pro-Trump and anti-Trump forces.  Don’t bet the rent on it, though.

None of this should come as a surprise.  Four years ago, Trump whined and cried how he would have won the popular vote if a mythical horde of illegal aliens and dead people hadn’t cast ballots for Hillary Clinton.   Now that he lost the popular vote a second time and the Electoral College as well, what else would Trump do but whine and cry even louder?

For his entire miserable life, Trump has been able to buy his way out of any mess he got himself into and he thinks he still can.  He found 126 members of the House of Representatives and 18 state attorney generals willing to file a Hail Mary lawsuit directly to the Supreme Court where Texas demanded a “do-over” for their boss.

It’s not going to work, but hey, whatever makes Trump happy while he’s cleaning out his desk is all on him.   There’s nothing “We the People” can do if Trump decides to start a war with Iran or do something horrendous. We already did what we had to do.

It’s time to think strategically for what comes next once Joe Biden takes over.

First, we take names of the Republicans who worked tirelessly to disenfranchise, discourage and depress the Black vote, beginning in 2022. Not just the ones in Washington, but also the ones in our zip codes who have done their Master’s bidding on a local level. We come for them, too, and send them to the same trash dump where we sent Trump: out of politics and out of power.

Which is not to say Biden gets any slack. He doesn’t. We own him and the Democratic Party. We put him in power, not white people. They wanted four more years of Trump’s naked racism and we said, “Nah. No more of that.”

We were right and they were wrong; we won and they lost. It’s not the job of winners to comfort the losers, but the job isn’t done, though. It’s just getting started.

Now we go to 1600 Pennsylvania Avenue, walk up to the front door and say it loud, Black and proud:  “Hey, Joe. WE put you there. You owe US and WE are here to collect.”

There’s no need for false humility.   Black Americans saved the United States from the bad deal white Americans made in 2016 and wanted four more years of. This is an opportunity to get something more than a mediocre white man’s gratitude.

We’d be fools not to take it.